MY GREAT-UNCLE GERALDE, at the age of 97, developed an intense liking for walking barefoot in the grass. We ourselves had no grass, but in front of the house next door was a nice young lawn. Around this lawn there was a thin string running. In the middle of the lawn was a sign:

KEEP OFF THE GRASS

Geralde and I used to sit on the veranda and look at the grass next door.

“The ground is no good for grass,” I said. I was about 11, and a student of where grass would grow and where it wouldn’t.

“Next door, same ground,” Geralde said. Geralde was so old he often talked like an Indian to conserve breath.

“Next door they planted the earth with the grass. It came like jelly rolls.”

Geralde rocked in the old chair and laughed his shrunken head off.

I was insulted. “It’s true,” I said, “because I saw it come. A truck arrived with many rolls of grass with earth attached. They placed all the pieces together and voilà, a lawn !”

“When you are older,” Geralde said, “you will have more sense. Over there the grass grew. Over here it will grow. In France I became a member of the French Academy of Botany for the green grass I grew.”

Geralde planted grass seeds in front of our house. He watered them with a watering can. He filled one can and watered. The rest he left dry. He had a theory that the water found its way to the places it was needed.

“The grass which is dry opens up the mouth and the water advances,” my great-uncle explained.

“This is not the way we learn in school,” I remarked.

“Tell me,” Geralde asked, “what is the capital of Peru?”

“You see?” Geralde cried triumphantly. “In school they teach you nothing.”

Of course no grass grew in front of our house. Geralde decided the birds ate the seed before they had a chance to take root. He borrowed my gun which shot corks and sat on the veranda every day. Whenever a bird lighted on the yard Uncle Geralde let go at him with the popgun. He never hit anything, but he scared the birds away all right.

A chicken roamed out front from in back and ne could not even hit the chicken, though he scared it.

What Geralde did hit was Miss Lapean, who lived next door and owned the lawn which they had brought in pieces like a jelly roll.

She was walking by when Geralde aimed at a sparrow and popped Miss Lapean in the nose. Miss Lapean’s face turned red and she ran up the walk and sivak her (i t at Continued on page 36

“You want to kill me?” she shrieked.»

“I aim at the sparrow,” Geralde said.

“No. You are crazy,” Geralde countered. “You buy grass like a jelly roll instead of growing it in the normal manner. I will report it to the police. A crazy woman lives next door to me.”

“If anybody is reported to the police it will be you,” Miss Lapean said. Then she ran down the walk and into her own house.

“I think,” Geralde said to me, “it is Miss Lapean who pulls up my grass. She is jealous.”

“Since we have no grass, how can she pull it up?” I asked.

“Don’t argue with your elders,” Geralde warned me.

It was about a week later, and just as dawn was making everything bright, that I looked out my window and saw Geralde in front of Miss Lapean’s.

He had his shoes off and he was running barefoot through the grass which was wet with morning dew. It would have been all right if he had not started to dance like some wild creature of the woods and to sing at the top of his voice.

The noise attracted Miss Lapean, who came out on her veranda in a bathrobe, her hair in curlers.

Geralde just laughed at her and went dancing through the grass. Miss Lapean chased after him and grabbed hold of his shirttail which had come out during the ballet.

Geralde turned around and secured a headlock on Miss Lapean. He forced her to the ground and they began to wrestle. PresentlyMiss Lapean squirmed out of the headlock only to find herself the victim of a toe hold. Geralde had her by the foot and was bending that foot backward toward her waist while she screamed for help.

They wrestled like this for a few minutes until someone called the police.

At the police station the desk sergeant asked Geralde what was the matter anyway.

“What is the matter?” Geralde repeated.

“There must be some reason to walk barefoot in the grass of a neighbor,” the sergeant said.

“There must be some reason to walk barefoot in the grass of a neighbor,” Geralde repeated. This was a tactic of Geralde’s whenever he was questioned. He would simply repeat the question.

“You wish to go to jail?” the sergeant asked. “In jail we have no grass, alas. In jail you can go barefoot among the small rocks.”

“The harm is to the grass which costs money to lay down in long strips,” Miss Lapean said.

“The grass,” said Geralde with scorn, “maybe cost money. Maybe. But to tell you the truth it is not worth it. I would not walk in such grass again. Never.”

“Do you promise to leave alone the grass of Miss Lapean and to walk somewhere else?” the sergeant asked.

“I promise,” Geralde said. “Under protest.”

“Bien,” the sergeant agreed. “Unofficially, then, I suggest you pay to Miss Lapean $10 for the use of the grass and everyone is happy.” v

Miss Lapean smiled and rubbed her hands. I was in the front row and I whispered to Geralde.

“Why five?” the sergeant asked Geralde.

“Because,” Geralde replied sadly, “the grass of Miss Lapean has worms. It is not good for walking.”

“If it is not good for walking, then why are you walking on it?” the sergeant persisted.

There were murmurs at the sergeant’s sharp wit.

Uncle Geralde looked from the sergeant to Miss Lapean and then back to the sergeant. His wrinkled face seemed more lined than ever and his usually bright eyes were moist with melancholy. His thin frame trembled.

“Ah,” said the sergeant, “let us have no appeal to sentimentality. Justice is fair to the young as well as the old. Do not, please, pluck at our heartstrings. You will hear only discords.”

There were murmurs again. Half those present seemed to be pleased with the sergeant. The rest seemed a little provoked.

Uncle Geralde stared at Miss Lapean with the sadness in his eyes of a sick poodle dog whose paw has been crushed.

Then he turned to the sergeant.

“Your honor, I am an old man. Justice cannot deny it. My pleasures are few. My teeth are not for steaks nor my eyes for beautiful women or great books. My blood does not race with the spring and my flesh does not sing with the autumn. I cannot gamble, for I have no money. I cannbt sing, for my voice is feeble and harsh. I cannot dance, for my legs do not follow my heart. Good wine elevates the pressure of my blood and is dangerous . . .”

He stopped here to Wipe from his eyes what I decided was a tear. The sergeant coughed uneasily. Miss Lapean produced from her pocketbook a small lacy handkerchief.

“I understand,” the sergeant agreed solemnly.

“Yet what is there for me to do? Voilà, I walk in the soft grass and feel the earth beneath me and I am not too sad to be alive. Is it too much to ask from my fellow human beings? The loan of their grass? When they have singing and dancing and music and . . .”

Miss Lapean dabbed the end of her nose with the lace.

“Monsieur le Sergeant, if it is within

“You wish,” the sergeant said slowly, sniffling a little, “to withdraw the complaint?”

“I wish not only to withdraw it, but I wish to give the defendant the right to walk on my grass until the day he dies, heaven forgive me for being so heartless.”

After the cheers had died away in Geralde’s ears and he had personally forgiven Miss Lapean, we sat together at a small table, Geralde sipping cognac, I drinking strawberry soda.

“Are you sad, my uncle, because what you told the sergeant was a lie?”

“No. Because it was the truth,” Geralde replied, drinking his cognac.

After a moment he added: “That

was my last cognac. Now all there is left to me is the green grass, under me for a while and then over me.”

Still, it was many a year before he died, and many a night he danced through the grass of Miss Lapean. And if it was good for Uncle Geralde, believe me, it was also very good for the grass, which to this day grows very very green in the front of the house of Miss Lapean. 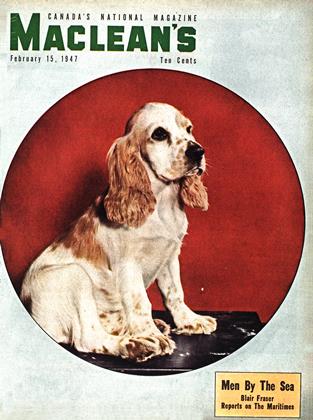