Click to View Article Pages
IN THE Editors' Confidence

IT’S A SAD axiom of the publishing trade that a prophet is without honor in his own scrapbook. That’s what makes Max Werner famous. He’s one of the few literary pundits who has been able consistently to look over his old clippings without blushing—which is our justification for supplying him with a limb on which to hang his latest prediction, “Peace Is Inevitable” (page 7).

Werner has been earning a living by keeping one or more dead lines ahead of history for more than half his 46 years. He was born in Kharkov in 1910, and his first job was teaching economics in the university there. He went to Germany in 1923, where he edited a newspaper for the next 10 years. About halfway through this period, he decided and duly announced that the next important international event would be a major war.

Between 1933 and 1939 he worked full time preparing to become an authority on the catastrophe which was still only a gleam in his crystal ball. He edited a military periodical in Paris, and spent four hours a day every day in the library of the Musée de Guerre studying military strategy and the histories of many wars. During the summer before Munich he wrote a book which accurately forecast the line-up of the Second World War. His subsequent assessments of the political and military course of the war earned him an international reputation. In early 1944, a few months before the event took place, he prophesied that the German generals would make an attempt on Hitler’s life.

Werner has no deep trade secrets. “I believe that statesmen are better strategists than generals,” he says. “Therefore I try to put myself into the boots of a leading statesman, gather all possible information at hand and then decide on the result that would follow logically.”

^Ronald J. Cocke has interviewed all kinds “from bums to beauties,” but he reports that the assignment of making an approximation of sense out of

Ralph Binge and Joe Gentile was almost too much for him. To get the life story of the uninhibited heroes of “Insult & Injury, Inc.,” Author Cooke did a sort of Maypole dance with his subjects around a live radio microphone at the unfestive hour of six a.m. for several mornings. His findings are on page 22.

#The last time Matthew Halton and G. R. Stevens met, they were both covering the battle of Mersa Matruh, 140 miles this side of El Alamein. It was a memorable occasion for them both: the Gurkha battalion with which they were bivouacked had just acquired the last dozen bottles of Canadian beer in all of western Egypt.

Now, as the respective authors of “The Hindu From Harrow” and “The Flag,” they are approximately reunited on pages 18 and 20 of this issue. We haven’t a thing in the house except tea, but cheers, gentlemen, anyway.

#George W. Kisker, who writes about laughter on page 19, is an authority on all the strange, imponderable things that go on in the vaguely understood field of human emotion and thought. He’s a B.A., an M.A. and a Ph.D., and has practiced medical psychology at Columbus State Hospital and military psychology in the United States Army and taught just plain psychology at Ohio State University.

0Like almost half the Winnipeg newspapermen of his generation, Herb Manning served his apprenticeship in the frigid, well-ventilated fastnesses of the Olympic Rink. He is now safely entrenched behind a desk as news editor of The Tribune, and can afford to write about the Olympic with affection and a faint note of repining. Which he does on page 21. 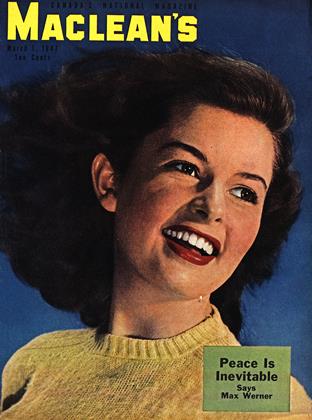