Back to Blighty BEVERLEY BAXTER April 1 1947

Beyond the natural delight at seeing my wife and children again, I am almost as consumed with curiosity as to what I shall find in Britain as I was in this same month of February, just 27 years ago, when I sailed from Saint John, N.B., with a telegram from Lord Beaverbrook in my pocket which read: “Come at your own risk.” That invitation may have lacked the fervor which usually characterizes Canadians but the operative word was “come” and the risk did not matter.

In 1920 London was both drab and dazzling. Out-of-work war veterans with grind organs, or as bands of street musicians, begged for pennies from passers-by. A young fellow named Morris, who had a bicycle shop in Oxford, was dreaming and planning his kingdom of cheap motor cars which was to make him Lord Nuffield and a multimillionaire. In politics t here was an allstar cast of Lloyd George, st ill in his 50’s; Churchill at 45; the dynamic Beaverbrook just out of his 30’s; a handsome Scottish mixture of Hamlet and Malvolio named Ramsay MacDonald, leading a Labor party which could not possibly ever come to office; the glittering, unpredictable, unreliable and fascinating “F. E.,” the great Lord Birkenhead. Neville Chamberlain was not even an M.P. and Stanley Baldwin was almost unknown.

In newspapers D>rd Northcliffe bestrode the field like a colossus. He not only owned the Daily Mail but the lordly Times. In the theatre there were playwrights called Shaw, Barrie, Maugham, Galsworthy, while a cheeky boy named Noel Coward was making epigrams in all directions hoping that someone would listen. An attractive pensive Armenian named Michael Arien was trying to sell short stories to London magazines.

There were no plans for reconstruction, or practically none. The lid was off the kettle and it was steaming away in grand style. It was a period

of opportunity and frustration, of brilliance and heartbreak, of grandeur and squalor. The man who had nothing more to give but the strength of his hands and the decency of his heart often found the road back to civilian life hard and discouraging. But to the adventurer, the promoter, the poet, the wit, the politician, the trickster, the dreamer, the builder and the blondes, it was a golden age. I shall not forget the excitement of being dumped by Beaverbrook into the very centre of it all.

“Your ignorance of journalism and politics fascinates me,” he said and we became friends for life.

So now, 27 years later, I am sailing again to Britain and to London, my horne. Lloyd George, Birkenhead, Chamberlain and MacDonald have been called to their fathers. Stanley Baldwin is the forgotten man. Only Winston Churchill is left from all that collection of glittering birds of paradise. He is out of office, rejected by the British electorate, but he towers over everyone in Parliament. As for Fleet Street, the Canadian upstart

Beaverbrook, who dared to singe Lord Northcliffe’s beard in 1920, is now the wise man of British journalism, experienced, constructive and respected. Only now and then does original sin break out from him, but; he curbs it, even though he does so with a sigh.

There will be no bands of war veterans on the streets of London, no airmen playing the grind organ, or limbless men begging for pennies. The human conscience has progressed despite all the pessimism that scorches the world today. The children of the poor will not be undernourished, nor will men be walking the streets looking for work if they have skilled hands to offer.

But what about the young Morris of today mending bicycles in a provincial town? He can dream—not even Sir Stafford Cripps can stop him dreaming— but will his dream survive the cold, grey light of reality? Now that Britain’s economy is being planned, the existing industries are allotted their supplies, they are given their quota for export and their quota for home consumption, their coal is rationed and their funds are not allowed to go adventuring abroad in foreign lands. A new Nuffield might dream a kingdom of cheaper-than-ever cars but he could not get the workers, nor the steel, nor the export permits.

In 1920 London had innumerable newspapers. Some of them were financed on a shoestring, while others, of course, had become great capitalistic undertakings like the Toronto Star, with funds built up by the system of society which allowed unrestricted private enterprise and full reward for high effort. Today in this year of light, 1947, Britain’s shortage of dollars limits the imports of newsprint, and no new Daily Journal can get the paper with which to start. I do not blame it on the Government for they did not create the shortages which are the withered flowers of victory, but Socialism is in essence a creed which is intolerant of small units and the

individual, preferring the great combine of co-operative stores to the petty little private trade, preferring the established mass-circulation newspaper to the struggling newcomer whose only wealth is his passion for justice and truth. Life must always be an adventure, but I am glad that I first set out for London in 1920 and not in 1947.

I was thinking about the opportunities for young men under various systems of society when I travelled a fortnight or so ago from Cincinnati to Urbana where the huge University of Illinois is set down on the flat prairie.

There are nearly 18,000 students in the little university town of Urbana. There are students from Egypt, from Palestine, from Turkey and from Europe. There are former G.I.’s, many of them married and living with their wives and children in prefabricated houses.

On my arrival I was conducted by a handsome young man to one of the 58 fraternities which are part of the University’s life. All men are bom free and equal in the great United States, but that does not mean that they remain equal, or that they all arrive together at the winning post in the pursuit of happiness. Not only do fraternities and the feminine sororities at American universities divide the privileged from the unprivileged, but these exclusive institutions are rivals among themselves, seeking to secure the most popular undergraduates, even those whose scholastic fame depends mostly upon their leg muscles. Nothing could have been more enjoyable than my visit to this most hospitable house at Urbana, but I found myself secretly in sympathy with the student who, when asked what fraternity he belonged to, answered: “Etta Bitta Pie.”

If I seem ungracious to my young hosts of that morning it is not intentional. I am merely expressing my interest, as a man from democratic England, in the social distinctions of the great American Republic. But having done so I must record that seldom have I been more impressed by a group of young men as those who welcomed me to their house and sat around the table to discuss world affairs while we all drank coffee.

Some of them had been soldiers and airmen, while others were just sprouting the first faint signs of a coming mustache. The ex-servicemen were thinking hard, and in world terms; the others were more inclined to see in their own country all the world they needed. Yet none of them bragged, none were

supercilious or anxious to scare off the visiting British politician. None of them posed or permitted themselves to look bored even if they were. They admitted that their fraternity was the best in the University but only in answer to a question on my part. But what impressed me was that each of them was an individual, each wanted to make his career in a system of society that allowed a man to risk to win. They recognized their duty to their own community, and most of them acknowledged their duty to the outside world. But none of them would have made good Socialist fodder.

I agree that these boys probably came from good families in the sense that money and comfort and opportunity can make a family good. Nor could I help contrasting them with a fanatical, striking-looking young man who at my meeting the night before said: “The British Socialists are not Socialists at all. The workers in Britain and America should declare a general strike now, as a prelude to revolution, and then take everything because it belongs to them.” I wonder, if that came to pass, if a young man would be allowed to stand up at a public meeting and denounce the workers. No one makes so much use of liberty as those who would destroy it.

In the gracious city of London, Ontario, with its familiar Waterloo, Pall Mall, Blackfriar’s Bridge and Young Father Thames, I visited the splendid University with its newly elected Chancellor, that distinguished editor, Arthur Ford. There was no such polyglot student population that one saw at Illiniois, but there was the same eagerness, the same doubts, the same questionings in the faces of the young. It is all very well for us older folk to wear harness, we are probably safer for it, but youth should be allowed to run free and untrammelled in the fields of opportunity.

Well—I am going home to frozen pipes, to the wordy tumult of parliament, to the leaden skies of London, to my children who will ask me for the fiftieth time why I cannot get a job in Banff so that they can live there, to my wife who will describe the horrors of the great freeze and be full of questions about everyone in Canada, to the land where they have revolution without bloodshed and where nothing that happens is unimportant or insignificant.

Well, as my son always says when he writes from school, I must go now. if 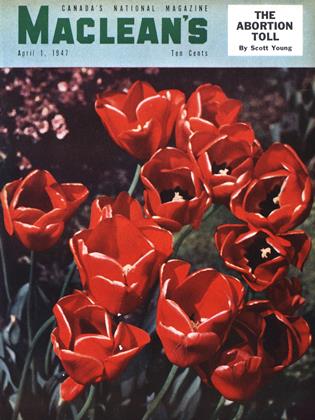