names of women you know over 40. Elizabeth is a close second, one in 27, while Margaret and Helen come next, each used one time in 40.

Names, like clothing, go out of style. Biblical names are far less fashionable than they were at the turn of the century. So are flower and jewel names—Pansy, Violet, Ruby and Opal. Percy, Reginald and Algernon, popular boys’ names at a time when English influence was strong, are rarely chosen nowadays. There are, of course, a few parents each year who are original in their choices. Recent U. S. arrivals acquired such names as Virginia Ham, Handsome Mann, Wash Fountain and Perty Smart. Another, christened Be Careful McGee, suggests greater devotion to a radio program than to the child.

Financially speaking, on the basis of 1946 figures, Canadian fathers come out of the game only very slightly ahead of their U. S. counterparts. A U. S. citizen, who earns $2,000 a year, and who has a wife and one dependent child, pays $95 less income tax than if he didn’t have the child. A Canadian in the same position saves less on his income tax but the federal baby bonus provides him, at the start, with enough extra money to boost his total advantage to $97. As the child grows older this family allowance is increased. Parents who succeed in having babies born a couple of days, or a couple of minutes, before the end of the year do all right in both the U. S. and Canada. Income tax deductions are permitted in both cases.

Dealing strictly in terms of dollars and cents, it must be admitted that there’s not much profit in having a baby. They will cost average Canadian city parents $110 to $150 in 1947. A crib and mattress, first year’s clothing, milk, fruit and vegetables, plus several incidentals will run into another $150. So this year’s parents will spend about $300 to have a baby and keep it healthy and happy for 12 months.

Father will be so busy earning this money, and all the rest that’s needed to keep a family these days, that he’ll see his child an hour daily, not counting week ends. Mother will be with her baby at least eight times as much and during its vital first year she’ll supervise the eating of some 1,500 meals. Running a baby Is a full-time job. It takes nearly six hours a day, with the equivalent of one of these days each week devoted to washing some of the 3,600 diapers needed during baby’s first hectic year. He’ll require 13 a day at

the start, but after a while he’ll taper off to a modest eight.

Joe di Maggio, the ballplayer, can changea diaper in 37 seconds, but most mothers spend about two minutes on the job.

Well-substantiated surveys reveal that diaper duty, and other efforts on baby’s behalf, have the practical effect of making average children three times less critical of their mother than of their father. Ninety-five per cent of small children like her better.

When there’s a baby in the family the chances of divorce are lessened just about nine times.

Religious belief has a reasonably strong influence on Canadian fathers and mothers. The Dominion Bureau of Statistics says that the chances are seven in 10 that both parents are of the same religious denomination, taking the country as a whole. Roman Catholics marry girls of the same faith about 88% of the time, but those of Jewish faith provide the maximum number of unmixed marriages; 97% is a typical figure. Anglicans, Lutherans, Baptists and Presbyterians are at the other end of the scale as far as major religious denominations are concerned. Only 50% of them marry within their own church, according to figures from the same source.

After a year our average baby has mastered a wide range of wonderful feats and has had some exciting things happen. He can drink milk from a cup and eat from a spoon. Give him a hand and he’ll make a good attempt at walking. He can stand with the help of furniture and he has acquired six of his 20 baby teeth and has given his parents a few sleepless nights while he was doing it. His first professional picture has been taken and he Is owner of some $5 worth of toys, ranging from the rattle he got at two months to such advanced items as a rag book, a soft doll and stuffed animals. He will also own a mug with his name engraved on it.

Child experts advise that he won’t be able to talk properly, but he’ll be able to say “dada” and “mama” which doting parents will fondly imagine refers to them. Actually the “aaa” sound comes easiest to babies. When he waves good-by, however, he’ll be on the level, because at this age he’ll have learned to recognize all the members of his family.

The feat that is represented by existing during these first 52 weeks Is emphasized by the fact that nearly as many persons are born dead, or die during the first year of life, as die during the next 48 years added together, according to the Department of National Health and Welfare. Our 1947 baby shouldn’t find the going too

tough, however. He has just about twice the chance of safely reaching the end of his first year that infants born in

He has the best chance of all if he’s an Ontario or British Columbia baby, and the poorest if Quebec or New Brunswick is his home. In Victoria, for example, in 1944, Dominion Government figures reveal that there were 26 infant deaths for each 1,000 live births. In Quebec City, on the other hand, 119 infants died for each 1,000 born alive during the same period.

But in making this comparison it is only fair to point out that Quebec has a different system of caring for illegitimate babies. They are kept in institutions because the higher birth rate in that province makes it harder to find families who are interested in adopting a child. A large number of children housed together offers more risks than when they are segregated and this accounts somewhat for Quebec City’s higher infant mortality rate, a term which refers to the death of babies up to one year of age. The 1945 Dominion Bureau of Statistics records put Quebec’s provincial infant mortality rate at just about one and a half times that of British Columbia.

Incidentally a baby’s chances of hospital birth are more than four times greater in B.C. than they are in Quebec. B. C. leads the Dominion with 92% of its babies born in hospitals. Nearly 15,000 Canadian mothers, in 1944, gave birth to babies without medical assistance.

Prematurity is still the chief cause of infant deaths and pneumonia holds second place. On the whole, however, Canada’s infant health picture is getting better, according to Department of National Health and Welfare

records. But there’s still room for improvement. In 1944, for example, 15,539 Canadian babies died before they were a year old, and over 50% of these were less than one month old. Eight countries have a better infant mortality rate than Canada. Sweden and New Zealand head the list and in those countries babies have almost twice as much chance of living to be a year old as they have here. Canada’s latest infant mortality rate is 55, which means that for every 1,000 live births 55 infants die in their first year of life.

Once over early hazards, however, our 1947 Canadian boy baby can expect to reach the ripe old age of 66. A girl who survives this hazardous first year can look forward to 68 far less dangerous ones. These figures are based on the latest Canadian life expectancy tables. All in all chances are 92 to 100 that both infants will pull through measles, school sports and summer vacationing to attain the mature age of 15. At this point their expected life span will automatically be boosted to 69 years for the male and 71 for the female. They can both count on 15 more years of life than their parents could at their birth.

So, if you’re having a baby this year it’s a mighty important event for you and for this country. You’ll want to reach for the calendar and put a big red ring around 1947.

While you’re at it you might as well underline 1951 as well. Why? There should be a little girl coming along about that time who’ll marry your son some time in 1975 if the law of averages keeps on working. And so far it doesn’t show any signs of quitting. ir 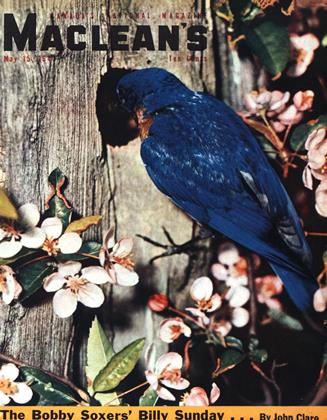