IT'S ONLY because textiles are almost as short as paper that this issue of Editors' Confidence isn’t printed on a red carpet. In addition to such valued regulars and semiregulars as Beverley Baxter, Max Braithwaite, Bruce McLeod and George Waltz, the current list of contributors includes a returning anchor man and possibly the most gifted group of Maclean’s newcomers we’ve ever assembled under one cover.

The returning anchor man is Lionel Shapiro, now back on his European beat after a 10 months break amid the beefsteak pastures of Canada and the United States. After completing his page seven article on Great Britain, Shapiro worked his way to Rome, where he has settled for the time being in a fine hotel you’ve he Americans he could discovered the Via get got Sistina. into to this do, that when do as and But flossy the in North queue before Rome inn, up before the room clerk. For three or four days he lived in a dingy flophouse which cost him the equivalent of 75 cents a day. It was in this Spartan setting that Shapiro officially learned Paramount Pictures had picked up the option on his forthcoming novel for $75,000. “I’ve lived in fleabags before,” Shapiro commented wistfully, “but never with a Dun and Bradstreet rating.”

•Since most of them are famous or celebrated already, the firsttime contributors we mentioned earlier have a better right to claim that they discovered us than we have to claim that we discovered them. Anyway, we're glad to have them with us, and hope they'll come back soon. Gabrielle Roy's short story ("Dead Leaves," page 20) is the brilliant young French-Canadian writer's first published work since `The Tin Flute." in the remote event that you haven't heard about the latter story, it's the English version of Miss Roy's first novel, a recent Literary Guild selection which has been enthusiastically received by professional critics and ordinary readers.

0Selwyn Dewdney (“Fear Goes to School,” page 16) is another young Canadian writer whose first novel has made news. Its title is “Wind Without Rain” and it’s been a domestic best seller since last December. Mr. Dewdney quit his schoolteaching job in London, Ont., two years ago, began writing “Wind Without Rain” on his pension and says he finished it on his wife’s nerve. “Fear Goes to School” is a direct statement of the views on education he developed while writing his novel—views which have been widely and warmly debated by Canadian educators.

£Jack Scott, who writes about his native British Columbia on page 13, is himself in a fair way to becoming a B. C. institution. After they’ve been urged to rush right out and look at the Douglas firs and Stanley Park, visitors to the Pacific province are frequently offered, as a sort of Baedeker bonus, the advice, “And be sure to read ‘Our Town.’ ” That’s the title of Scott’s daily column in the Vancouver Sun, a trenchant and frequently witty commentary which has solidified its author’s reputation as one of the country’s most versatile newspapermen.

Scott lias been working for newspapers for almost half his 31 years. He’s been a reporter, city editor, news editor, executive editor and managing editor, although not necessarily in that order. During his ascent from private to captain during the late war, he made a number of Canadian Army broadcasts from the Western Front and later helped put out the London and German editions of the troop newspaper, the Maple Leaf. 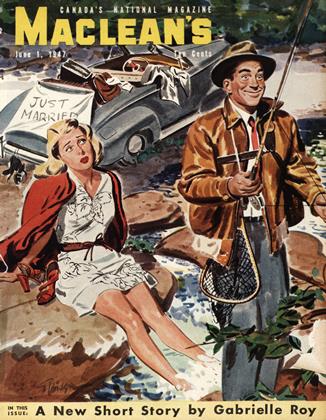