ONE OF the collateral effects of the current session of Congress has been a rise in the political stock of Governor Thomas E. Dewey of New York. It now looks as if Mr. Dewey would be the Republican nominee for President again in 1948.

The record of Congress, under Republican control, has helped Mr. Dewey in two ways. First, it has diminished—or at least not increased the prest ige of his principal competitor, Senator Robert A. Taft of Ohio. As the main architect of Republican domestic policy in the upper House of Congress, Mr. Taft has been in the thick of every controversy. To his credit he has not flinched or tried to duck his responsibilities. Unavoidably, however, he has annoyed a good many people, some of them influential in his own party. At the same time he has failed to dramatize himself. He remains, to the general public, a rather colorless man.

Congress, in the second place, has aided in reviving President Truman’s popularity. Polls indicate that if the presidential election were being held this summer the result would be very close. A majority of the politicians in the upper echelons of the Republican party dislike Governor Dewey. But they recognize that he has a strong rank-and-file appeal. They would rather win the national election with him than lose it without him.

If, by next June, the professional Republican politicians feel confident of an easy victory in November, they probably will turn to Senator Taft or some other congenial candidate. The extreme right wing of the party would prefer the other Ohio Senator, John W. Bricker, who was the vice-presidential nominee on the Republican t icket Continued on page 50

with Mr. Dewey in 1944. Mr. Bricker was the real favorite of the national convention in that year. He was given .second place instead of first only because in the cool judgment of leaders of the party he had no chance of defeating President Roosevelt.

whelmingly re-elected Governor of New York. The consensus is that since Mr. Roosevelt’s death no one can beat Mr. Dewey in New York. This state alone furnishes more than one sixth of the electoral votes needed to win a Presidential election.

As Governor, Dewey has proved himself to be an efficient administrator and a strong—if sometimes rather highhanded—director of his party in the legislature. Unlike the Republicans in Washington he has not had to come to grips with many difficult issues. He can express an opinion on a national question when he thinks it advantageous to himself to do so. He can remain silent on national questions when he chooses. This is one of the advantages which a governor of state has over a member of Congress in seeking the Presidential

nomination. It explains in part why many more governors than senators or representatives have been nominated for the Presidency.

The Republicans have never before renominated a defeated candidate for the Presidency. In the past, however, their defeated candidates have usually been elderly men who thereupon retired from politics. Mr. Dewey is only 45 now. His re-election to the Governorship of New York renewed his legitimate claim to the Presidential nomination. Moreover, it is now generally admitted that no Republican could have defeated Mr. Roosevelt in 1944 and that Mr. Dewey, under all the circumstances, must be given credit for having made a strong race.

This session of Congress has enhanced the prestige of Senator Arthur H. Vandenberg of Michigan. He has carried a majority of his party with him on questions of foreign policy. At the same time he has made himself a target for the attacks of the isolationist minority, although no more so than Mr. Dewey. If Mr. Vandenberg would actively seek the nomination he might be able to win it. But he has flatly refused to turn a hand. Some Republicans, and a larger number of Democrats, suspect that the Michigan Senator made this decision in the hope that the two leading candidates—Taft and Dewey—would block each other, thus opening the way for his own selection. Others think that the real explanation lies in his qualms about his health. Outwardly he looks well but, if elected, he would be nearly 65 when he entered the White House. He might survive one term but the strain almost certainly would shorten his life. He has worked from boyhood and avers that he intends to relax and enjoy himself after his present term as Senator expires in 1950.

Harold E. Stassen, the only Republican who admits that he is campaigning for the Presidential nomination, is still managing to keep himself in the public eye despite the fact that he holds no office. In this he is assisted by the fact that he is liked and admired by several of the leading newspaper editors and syndicated columnists. In domestic affairs he is the most progressive of the prominent Republicans, and, with respect to international affairs, the boldest and most imaginative.

How much convention support he will have outside his own state of Minnesota is problematic at this stage. He recently said, in answer to a question, that he might accept the vicepresidential nomination if it were offered to him. An admission of interest in the lesser office at so early a date is supposed, by the custom of politics, to be fatal to a campaign for the Presidential nomination. Mr. Stassen’s friends insist that his reply was merely another example of the candor which sets him apart from the general run of politicians. His chances of winning the grand prize look extremely slight, however, even though he is the first choice of many of the ablest young men of his party and, it is generally admitted, would be a magnet for independent voters. Also he is a veteran of World War II, having resigned as Governor of

Minnesota to serve in the Navy, whereas Messrs. Vandenberg, Taft, and Dewey have never worn the uniform of their country.

Some of the old-liné party leaders would accept Mr. Stassen if they thought he was the only man who could defeat Mr. Truman. Others would agree to his nomination only if they felt sure Mr. Truman would defeat him. They would rather lose the national election than see the leadership of their party pass into such progressive hands.

The Republican party, has several first-class younger Senators and a few capable governors in addition to Mr. Dewey. With the possible exception of Governor Earl Warren of California, none of them is widely enough known yet to be a popular contender for the Presidential nomination.

And Then There’s Ike

No roundup of Presidential possibilities would be complete without the name of General Dwight D. Eisenhower. He has declared that he is not interested in political office and told his friends that, in any event, he would never run against his present chief, President Truman. But, unlike his military mentor, General Marshall, now Secretary of State, he has not said flatly that he would never accept a nomination for an elective office. As professional soldiers neither of these men has ever had a party affiliation, but Marshall came from a Democratic family whereas Eisenhower was brought up in a Republican family in the highly Republican state of Kansas.

Eisenhower’s way with a crowd is the envy of the politicians. He is warm and friendly, while giving the impression of intellectual precision and force. Like Marshall he is obviously so thoroughly saturated with the democratic tradition that he allays misgivings about putting a military man in a high civilian office. I don’t think he will succumb to political temptation. But if he should he would not be easy to block from the Republican nomination —or for the Democratic nomination if Mr. Truman should decide not to run again.

Outside the South the Democrats are so short of higher-ranking office holders with popular appeal that Mr. Truman may have trouble in finding a strong vice-presidential partner. Mayor O’Dwyer of New York City is ineligible because he was born in Ireland. (The President and Vice-President must be native-born citizens.) Most of the old Rooseveltians are too battle-scarred. Among the members of the President’s cabinet only two have ever run for an elective office and neither of them comes from an important state. A Southern Democrat would add no strength to the ticket, since that part of the country is safely Democratic anyway, and since most Southern Democrats are anathema to the northern negroes. An exception to this last obstacle would be Senator Pepper of Florida, but he is too far to the left, having chosen to join Henry Wallace in a pro-Soviet attitude. ★ 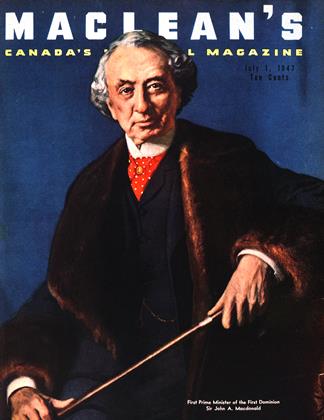