Charlotte Whitton (“The Exploited Sex,” Maclean’s, April 15) has failed to look into some of the aspects of the case. A local branch of a bank here has had to employ five women to replace three men, thus making the place very crowded. Women take a lot more time off for sickness than men. A male employee of said bank told me that after the annual bank party three of the women failed to turn up next morning with excuses such as cold, flu, stomach trouble. (The latter probably true!) The three male members of the staff all arrived on time and though slightly the worse for wear they carried on their day’s work, plus the work of the three absent women.

In many cases equal pay for both men and women would be unfair. —Woman Who Knows Her Worth, Vancouver.

You must have been hard up for a “filler” when you printed Charlotte Whitton’s article, “The Exploited Sex.” The little lady wonders why men get more preference and pay in industry, does she? I can sum those reasons up under three headings. They are:

(a) —Mea are more efficient.

(c) —Men are much more often the sole support of dependents, the latter being four times out of five women or their offspring.—Veteran, St. Vital, Man.

Fie on You, Fraser!

In “What Now, Jean Baptiste?” (Maclean’s May 15) Blair Fraser callously dismisses New Brunswick as negligible in any comparison—just “poverty-stricken New Brunswick.” I had the impulse to arise and smite.

No doubt we shall go on sending a superior brand of college president, poet, scientist and politician to be snapped up by any province which has amassed a larger quantity of ducats than ourselves, but there have been indications of late that New Brunswick no longer intends to take “the slings and arrows of outrageous fortune,” lying down.

I am a Conservative, but will willingly hold Premier McNair’s coat should a further occasion for discipline arise. “Poverty-stricken New Brunswick!”—M. E. Veazey, St. Stephen, N.B.

“Did This Happen to You?” (Maclean’s April 1 ) —‘ ‘You were looking at the Saturday night church ads of the city paper, and there, under a banner headline, a most intelligentlooking man in a wing collar was advertising proof from the Book of Revelation that the Anglo-Saxons were God’s chosen people.”

I take it that Mr. H. Gordon Green

intended that remark to be in the nature of a sneer. May I say that this is no time to belittle AngloSaxondom. God told His cho&en people that definitely they were not to allow the Stranger in the government and gave the reason—the Stranger would get above us very high and we would come down very low.—Henrietta Forman,Woodstock, Ont.

I wish to express my appreciation of Maclean’s Magazine. As a ruralschool teacher I have made very good use of the pictures by Canadian artists which you make available to the public. These have a prominent place in my classroom and I feel that they are a contributing factor in the moral development of Canadian citizens.—N. J. Kroeker, Rosthern, Saskatchewan.

May I congratulate you on the many interesting and amusing covers during the past year. Such a relief from the ubiquitous young ladies seen so often, displaying—presumably—a row of large white teeth suitable for an advertisement for tooth paste. Please continue with the amusing and clever ones.— Mrs. R. A. Brock, Montreal.

—Thanks, but hope you'll forgive us this issue's bathing beauty. We just couldn't resist (presumably) those teeth. —The Editors.

The figures are not applicable to the voluntary social agencies affiliated with the Community Chest of Greater Toronto. A study of salaries of social workers in these agencies shows the following: 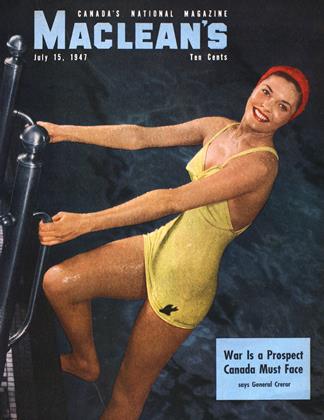