BACKSTAGE AT OTTAWA THE MAN WITH A NOTEBOOK January 15 1948

YOU MAY not have heard the last of Dana Doten, press attaché and speech writer for the American Ambassador here, who was fired last month. Doten has appealed his dismissal to Civil Service authorities in Washington. There’s a possibility that Doten may get his job back and that some of his superiors may lose theirs.

Doten was scapegoat in the fuss over Edmond Turcotte, former Montreal editor who is now Canada’s first consul general in Chicago. You may remember that when Turcotte’s appointment was announced, the Chicago Tribune and the Ottawa Journal both reported that the United States Government had “semiofficially” protested. Turcotte was persona non grata, these reports said, because of articles he had written criticizing the United States.

The Canadian Department of External Affairs formally denied this report. Later, after Doten was fired, the U. S. State Department officially announced that his discharge (after 14 years in his Government’s service) was merely a routine economy move. Both these official statements were untrue.

Turcotte’s appointment was protested by the American Ambassador to Ottawa, Hon. Ray Atherton, in the strongest terms. Mr. Atherton believed himself to be stating a view which would be supported by the United States Government but the U. S. State Department didn’t back him up, so tiis protest now rates technically as a “personal” representation. For that very thin reason, the Canadian Government has stood pat on its denial (hat there ever were any “semiofficial” protests.

ERE’S WHAT happened, as recounted by a close observer of the entire incident:

Turcotte’s appointment was revealed prematurely in a forecast by the Ottawa Journal and it annoyed Ambassador Atherton very much. Mr. Atherton was one of those in the American State Department, early in the war, who consistently opposed General Charles de Gaulle and the Free French. Edmond Turcotte, who was then editor of the Montreal daily Le Canada, was a staunch Gaulliste and bitterly critical, in many a signed editorial, of American policy toward France. Mr. Atherton conceived a dislike for Mr. Turcotte which apparently never waned.

When he read the Journal’s forecast of the Turcotte appointment, Mr. Atherton telephoned Washington to find out whether there had yet been any official notification. He was told there had not. Mr. Atherton said in that case he intended to protest this appointment and he expected the State Department to back him up.

Mr. Atherton did not, of course, complain to the Canadian Government of Mr. Turcotte’s support of General de Gaulle. He complained instead of articles Mr. Turcotte had written criticizing the United States, particularly in a piece he wrote a couple of years ago for the University of Toronto Quarterly.

By the time Mr. Atherton’s protest got to External Affairs Minister St. Laurent, who was away at Lake Success, Mr. Turcotte’s appointment had been proposed officially to the United States Government and no objection had been offered in Washington.

Just why the State Department decided not to support the Ambassador’s position is a lit tie obscure. It’s reported in Ottawa that Julian Harrington, Minister at the Embassy here and Mr. Atherton’s chief lieutenant, disagreed with his chief and carried his point with Washington. Anyway, for whatever reason, the State Department did accept the Turcotte appointment and left the Ambassador on a limb.

Meanwhile, the story got into the newspapers. Most people took it for granted that Dana Doten had given out the information and he did talk to some reporters. But the original story to the Chicago Tribune was given out, not by Doten, but, it is claimed, by Ambassador Atherton himself. What Doten did wras to confirm what his boss had said.

Later Doten was called to Washington and presumably grilled about his part in the whole affair. But he then came back to Ottawa and resumed his

job, evidently satisfied that his explanations had been accepted -in fact, he later declared publicly that he’d left Washington with the assurance that the w'hole thing was cleared up. But he hadn’t been back more than a few days before the axe fell.

There were reports, to Washington, that the Canadian Government was deeply offended about the affair and had demanded somebody’s head on a charger. There is no doubt, that Ottawa was offended, but External Affairs has denied vigorously and categorically that Canada had anything at all to do with Doten’s removal. In any case, the American authorities seem to have decided that a human sacrifice was in order and Doten was the smallest man involved.

IF ANYONE has noticed that the organization of import restriction has been more of a mess than ordinary, there’s a reason. This was a program that

affected Canadian business more deeply and intimately than anything since the outbreak of war. But its organization had to be planned in the darkest secrecy, by men who had no first-hand knowledge of the industries whose fate they were determining.

Restriction plans bad to be kept as secret as budget information, for the same reason. Anyone with foreknowledge could have put himself far ahead of his competitors, so no businessmen could be consulted until after the program had gone into effect.

One unfortunate result was that the restriction orders themselves were often in error.

When a group of innocent bureaucrats banned the import of “lumber,” they thought they were following common sense. After all, Canada’s one of the great exporters of lumber; why waste dollars bringing coals to Newcastle?

But, after the order wjas published, they dis-

covered that the only wood that can be used for making lead pencils is a product oí California. A dyemaker had a new plant almost completed, but to line nis vats he had to have a special variety of red cedar from the Deep South the only wood that resists t he acids of the dyemaking process.

The most unkindest cut, though, came from the Arctic missionaries and the northern patrols of the RCMP. It appeared that even the Mounties cannot get their man without American materials—the dog sleds that they and the missionaries use all winter are made of Missouri hickory and nothing else will do.

Special permit s were issued, of course, to let in the needed materials. But these three examples will give you an idea why so many permits had to be given, why so many second guesses had to modify the original program of November 17.

The second trouble caused by secrecy was the difficulty of building up a staff.

Right Hon. C. D. Howe’s Reconstruction Department has been nothing but a hollow shell for months. Of the high-powered group who won the rod action battles in wartime, only vo or three were left—and most of 'tfi'em were planning to leave.

Long before the restriction program was final, it was realized that something far bigger and better than the existing Reconstruction Department would be needed to do the job. The question was, how to get the men?

“It’s very difficult,” said one official wryly, “to bring a first-class man to Ottawa and persuade him to accept a temporary job, when you can’t tell him what the job is.”

Now that the facts are known, Ottawa should do better.

Ken Taylor, who runs the consun erimport control, has had many years of practice at the Wartime Prices and Trade Board in getting along pleasantly with businessmen without giving them everything they want. John Berry, Taylor’s opposite number who controls the import of capital goods, is the man who finally brought some order out of the chaos of War Assets Corporation. They are both able men.

Secrecy was the reason for most of the actual confusion. The failure the Government most bitterly regrets is the failure in public-relations work. Whatever you may think of the dollarsaving program, one thing is beyond dispute—it was very badly presented to (he Canadian public, if 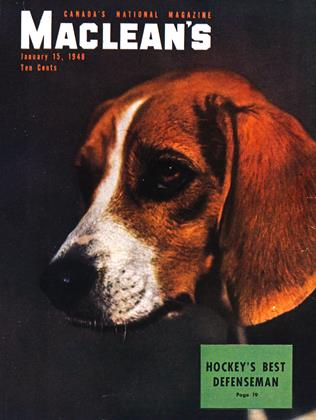