By THE MAN WITH A NOTEBOOK

MIKE PEARSON'S entry into the Cabinet as Minister of External Affairs was a greater surprise to many who knew him well than it was to the general public. The day before his appointment was announced, one of the Cabinet committees had a meeting; six Ministers were present, and five of them expressed the view that this Pearson rumor was just idle gossip.

MANY A newspaper reader must have thought the Pearson appointment a routine development. For two years, speculative stories about the Liberal leadership have mentioned Pearson as a possible candidate. The catch is that these stories hadn’t much to them.

They were not wholly groundless—they proceeded from wishful thinking of back-bench Liberals who thought it would be nice if they could get him. But the men who knew Mike Pearson best were the most sceptical of these pipe dreams. They knew Pearson had no urge to be a politician.

The day after he joined the Cabinet, a reporter asked, “When and how did you become a Liberal?” Mike laughed. “Yesterday,” he said, “by being sworn in as a Liberal Minister.”

That was literally true. No Canadian took less interest in party politics than Mike Pearson in the 30 years since he became old enough to vote. His grandfather was a Liberal who ran five times in Dufferin County and was five times defeated. His father was a staunch Conservative. Mike compromised by taking no party label.

He didn’t change that attitude as much as you might think, by entering a Liberal Cabinet. To him the new job is just a chance to do more effectively what he’s been trying to do for years—help build a collective security system that will work.

Pearson believes the greatest hope for peace is expansion of Western Union into Atlantic Union. He thinks the critical time for that project is now—the coming

year to 18 months. He thinks Canada can do a great deal to bring Atlantic Union to birth.

Mr. St. Laurent shares Pearson’s views; some other colleagues do not. There are senior men in the Cabinet who think Atlantic Union is a mere dream, and Western Union a foredoomed failure. If one of these had taken over Mr. St. Laurent’s job in External Affairs, Pearson might have found himself stymied. A civil servant’s influence goes only so far; if he fails to convince his Minister, his views may never even be put before the Cabinet.

Already, in private talks at Washington, Pearson has sometimes found himself going farther in the way of commitment than his Government might be willing to follow. Now for the first time, and in a crucial time, he’s in a position to speak for the Government. It was the kind of opportunity that comes only once in a lifetime.

FAR FROM taking his acceptance for granted, though, Mr. King and Mr. St. Laurent appear to have been doubtful almost to the last moment whether they could get him. A year or so ago, when it looked as if Mr. St. Laurent might be retiring from public life, there were well-supported rumors that Mr. King had sounded Continued on page 66

Canada has done a lot already—and in this context, “Canada” means mainly Mike Pearson. He helped to write the St. Laurent speeches calling for “a closer association for collective self-defense.” He used his unequalled personal contacts in Washington to encourage the Americans into unqualified support of Western Union, and bold steps toward Atlantic Union.

out Mr. Pearson on the possibility of his entering public life. But Mr. St. Laurent decided to stay on, and the matter was dropped—apparently without any definite reply from his Undersecretary.

It didn’t come up again until the time of the Liberal Convention, when the old and the new leader seem to have come independently to the same conclusion—that they had to have Pearson. Mr. St. Laurent had to learn a new job, the biggest job in Canada; be felt he needed someone who could take over External Affairs without apprenticeship, and only one man could do that. Somewhat to his own surprise, Mr. St. Laurent found Mr. Pearson willing to tackle it.

No one here, in any political party, appears to doubt that Mike Pearson will be a good Minister of External Affairs; he’s had 20 years of training plus a rare natural talent for the job. Whether he will be a successful politician is a more debatable question.

In private, at close quarters, his ability to win friends and influence people is exceptional. Pearson is 51, and looks about 40—a boyish-looking man of middle height, with black hair beginning to go grey, a round ruddy face and a lop-sided smile. No suit on him will look freshly pressed for more than 10 minutes, and his bow tie is always about 45 degrees away from the hoizontal.

He’s an Oxford M.A., and has one of the half dozen best minds in the Government service; he was also a college athlete who still plays a fair game of baseball. Pearson is probably the only man in Canada who can give you, from memory, both the British balance of payments position and the American and National League baseball standings. He’s a good raconteur with an enormous fund of funny stories, most of them true.

Adding all these things up, though, you get only a small fraction of the Pearson personality. He has the gift of making acquaintances feel like old friends. His good nature is practically shatter-proof, but when he does get angry he can do it without making enemies; his judgment is good and bis decisions firm but not pig-headed. United Nations found him an ideal chairman for a turbulent committee— they still talk about the job he did on Palestine last year.

But the big unanswered question is, can he make the same impression on a big political audience that he makes on a small group? As a public speaker he is competent but not outstanding; will he be able to get his personality across to thousands of people, as he can to a dozen at a time?

If the answer turns out to be yes, Mike Pearson might well end up as Prime Minister of Canada.

Why wouldn't Canada help Britain and the U. S. by sending RCAF planes to the Berlin air-lift?

In National Defense circles here, you get two answers to that question. One is that the Allied position in Berlin is untenable and absurd—a stupid mess that they should never have got into. Lionel Shapiro’s report from Berlin last month (“We Trapped Ourselves in Berlin,” Maclean’s September 15) happened to be completely in line with Ottawa’s view. Canada had no share of responsibility for getting into the trap, and wants no share of backing out of it.

Two very tough problems lie before the Newfoundland delegates and the Cabinet committee now wrestling with the job of bringing the new province into Canada.

One is the tariff. When, exactly, will Newfoundland’s tariff against Canadian goods come off? And how can Newfoundland businessmen carry on in the meantime, when they know that some day soon, the same goods can be bought for a lot less money, and they’ll have to sell out their inventories at a loss?

If, for example, the construction industry in Newfoundland should decide it isn’t worth while to bring in any more materials until they can be bought duty-free, the whole Newfoundland building program would stop. Thousands would be thrown out of work. Newfoundland’s entry into Canada would come bang in the middle of a sudden depression.

Of course the Newfoundland Government could lower the tariffs any time it chose, but then what would it do for revenue? Tariffs are the biggest single

item in Newfoundland revenue. Until they are replaced by federal subsidies and tax rental payments from Ottawa, a Newfoundland Government operating without a tariff on Canadian goods would go broke.

The other major problem is the fish market. Fishing in Canada is a free, competitive enterprise. In Newfoundland, the whole export business in salt fish is rigidly controlled. It’s run by a state-enforced monopoly—not exactly a state monopoly, as the agency is a group of private companies, but a monopoly enforced by law.

It will be difficult to let this system cont inue while the-Maritimes go on in their old free way. It will be almost; equally difficult to make it a general practice of the Canadian Government for all fisheries. Yet many Newfoundlanders think that a sudden end to NAFEL would bring chaos and disaster to the island’s main industry.

There are some other tough nuts, too, on the conference table here this month—for instance, Newfoundland has a dollar problem of its own, which brings new complication into the Canadian dollar problem. But. there’s one note of real cheer: So far as Ottawa has been able to learn, there isn’t any serious political problem about Newfoundland’s entry.

In the main, according to the reports reaching here, the Newfoundland populace has accepted the plebiscite decision with the utmost good will, and all are pulling together to make Confederation work. There is a die-hard minority still fighting for responsible government (they’ve petitioned the Irish Government, among others, to defend them) but these recalcitrants are few. The most prominent and influential members of the responsible government movement have dropped out, and are willing to make the best of the new situation. ★ 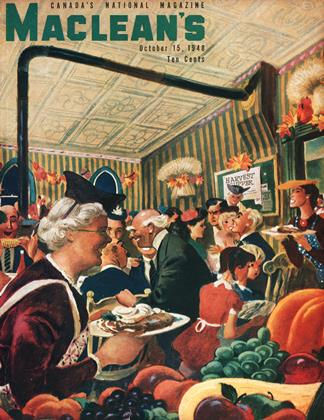