The Day I Built the Doghouse JACK SCOTT November 15 1948

I HAVE the whole story carefully memorized. Any moment now the S.P.C.A. men will be pounding on the door. “Come in,” I’ll say with a gallant little smile, extending my wrists for the steel cuffs, “I’ve been expecting you . . .”

It was on Saturday that my wife looked up from her chores and started the whole mess. I noticed idly that she was holding the baby under one arm, washing the lunch dishes with the other and mopping the floor with her feet.

She is inclined to be unaccountably churlish at such moments and I braced myself for the whiplash of her tongue.

“Why don’t you build a nice house for the dog?” she suggested. “It will keep your busy little fingers out of mischief this afternoon.”

“I do wish you’d stop treating me like a small boy,” I said crossly, putting down my crayons.

Still, the idea appealed to me. After all, Sport is really getting too big to sleep under the kitchen stove. Only the day before our neighbor, Dudley Framshaw, made some flippant remark about throwing a saddle on him. It occurred to me, too, that if I built a nice little house for Sport he might get up and let me lie on the chesterfield.

Now to be frank, carpentry is not my long suit. I stammer with a hammer, I’m raw with a saw, a fizzle with a chisel. In fact the only thing I’d ever constructed before was a folding stepladder in a high-school woodworking class. It had lived up to its name and folded neatly the moment you reached the third rung.

But a doghouse! Why, as my’ wife pointed out, even a little child could build a doghouse. There being no little children about, I got into the car and proceeded to the nearest lumber yard.

“I wish to purchase some lumber for a house ...” I said casually to the man. His eyebrows shot up, a winsome smile came to his face, he thrust a cigar

between my clenched teeth, invited me to his hunting lodge for the week end and appeared genuinely interested in my problem.

“. . . for my dog,” I concluded. The man’s face fell with a thud, he snatched back the cigar and turned me over to an assistant. Presently 1 was on my way home with the back seat full of $14 worth of boards and a two-dollar bag of assorted nails, convinced that I’d soon have to find a better job or a smaller dog.

EVER THE man of action I had a short nap and went right to work. The first step was to lay out my equipment: one hammer, one saw, one axe, one bottle of iodine and a giant, economy box of Band-Aids. I then selected a nail, lifted the hammer and brought it down smartly on my thumb. The project was officially under way.

Soon the ringing sound of construction and curses brought Framshaw to his side of the fence. He recoiled in mock horror at the sight and broke into nervous laughter.

“Ah, your father’s mustache,” I rejoined swiftly with the flashing wit for which I’m known the length and breadth of the block. We smiled warmly at each other as neighbors do when exchanging such pleasantries.

“For yourself?” Framshaw enquired with a curious glance at the structure.

“Go fly a kite,” I responded, matching his repartee with another whizzer.

to lean, rakishly ofT centre appeared to be the work of a professional. By some miscalculation of materials I’d run out of boards in constructing the walls and had cleverly improvised a thatched roof out of the remains of an old wicker chair.

Architecturally, the over-all effect was one of many types or, in fact, very similar to Sport himself.

As I hammered in the last slanting nail and adjusted the final Band-Aid my wife joined me. Together we gazed a moment at the edifice much as early man and his mate must have surveyed the first wheel.

“Only you could have built it,” she confessed as I lowered my eyes and flushed with pride.

Framshaw himself had disappeared into the house, but I could see that he and his wife were peeking from behind the curtains. I guessed they must be listening to some radio program since they appeared to be gasping with laughter.

But now the crucial test had arrived. It was time to introduce Sport to his new mansion. I thought of his beady bloodshot eyes lighting up, his tail wagging, his eager whine of pleasure—

this would surely be more than com-t pensation for my efforts.

I went into the house and approached Sport cautiously. He was lying contentedly in his customary place on the chesterfield, gnawing on my newest Book-of-the-Month dividend. He gave me his usual friendly greeting, baring his teeth and emitting a low growl.

I coaxed him outside with a pound of raw hamburger and together we bore down on the doghouse. I noticed it had leaned a little farther, but was still bravely standing.

It was then I heard the strange little yelp from Sport. I looked down at him. The hair on the back of his neck had gone up, his body trembled violently, then stiffened. Suddenly he leaped backward, turned in mid-air and at the full gallop cleared a six-foot hedge and was soon lost to sight up Maple Boulevard.

All this I will confess to the S.P.C.A. I have nothing to hide. I am prepared to take Sport back with no questions asked. Indeed, there’ll be a light burning in the doghouse door to guide our wandering mutt home—or, at least, there will be just as soon as I cut a door in it. ★ 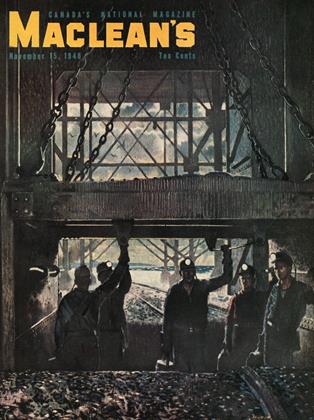