MY SISTER and I were walking through the old sun-still fields the evening before the funeral, recalling this or that thing which had happened in this or that place, turning over memories after the fashion of families who gather again in the place where they were born trying to disclose and identify themselves with the strange children they must have been.

“Do you remember the afternoon we thought you were lost?” my sister said. I did. That was as long ago as the day I was seven.

“We searched everywhere,” she said, “up in the meetinghouse, back in the blueberry barrens . . . we even looked in the well. I think it’s the only time I ever saw Father really upset. He didn’t even stop to tie up the horse’s reins. He raced right through the chopping where Tom Reeve was burning brush, looking for you . . . right through the flames almost. They couldn’t do a thing with him. And you up in your bed, sound asleep!”

“It was all over losing a penny or something, wasn’t it?” she went on, when I didn’t answer. It was. She laughed indulgently. “You were a crazy kid, weren’t you?”

I WAS. But there was more to it than that. I had never seen a brand-new penny before. I thought they were all black. This one was bright as gold. And my father had given it to me.

You would have to understand about my father and that is the hard thing to tell. If I say that he worked all day long, but I had never seen him hurry, that would make him sound like a stupid man. If I say that he never held me on his knee and that I never heard him laugh out loud in his life, it would make him sound humorless and severe. If I said that whenever I’d be telling mother some of my fancy plans and he’d come into the kitchen I’d stop, like someone hiding the pages of a foolish book, you’d think that he was distant and that in some kind of way I was afraid of him. None of that would be true.

There’s no way you can tell it to make it sound like anything more than an inarticulate man a little at sea with an imaginative child. You’ll have to take my word for it that there was more to it than that. It was as if his sure-footed way in the fields forsook him the instant he came near the door of my child’s world and that he must wipe off his feet before he stood inside, awkward and conscious of trespass; and that I, sensing that but not understanding it, felt at the sound of his solid step outside my world’s foolish fragility.

He would fix the small spot where I planted beans and other quick-sprouting seeds before he prepared the big garden, even if the spring was late; but he wouldn’t ask me how many rows I wanted and, if he made t4xree tiny rows and I

He, my father, had just given me a new penny, bright as gold.

He took it from his pocket several times, pretending to examine the date on it, waiting for me to notice it. He couldn’t offer me anything until I had shown some sign that the gift would be welcome.

I started with it to the store. For a penny you could buy the magic cylinder of “Long Tom” popcorn, with Heaven knows what colored jewel on the ring inside. But the more I thought of my bright penny disappearing forever into the black drawstring pouch the Assyrian merchant kept his money in, the slower my steps lagged as the store came nearer and nearer. I sat down in the road.

It was that time of magic suspension in an August afternoon. The lifting smells of leaves and cut clover hung still in the sun. The sun drowsed, like a kitten curled upon my shoulder. The deep flour-fine dust in the road puffed about my bare ankles, warm and soft as sleep. A swallow-tailed

butterfly clung to the road, its bright-banded wings spreading and converging like the movements of breathing. The sound of the cowbells came sharp and hollow from the cool swamp.

I began to play with the penny, postponing the decision. I would close my eyes and bury it deep in the sand and then, with my eyes still closed, get up and walk around and then come back to search for it, tantalizing myself each time with the thrill of discovering afresh its bright shining^edge. I did that again and again. Alas, once f.oo often.

It was almost dark when their excited talking in the room woke me. It was mother who had found me. I suppose when it came dusk she thought of me in the bed other nights and I suppose she looked there without any reasonable hope, but as you do when the search has become desperate, in every place where the thing lost has ever lain before. And now suddenly she was crying.

“Danny!” she cried, with the pointlessne«# of sudden relief, “where have you l>een!”

If my father hadn’t been there, 1 might have told her. But. when I looked up at my father, standing there like the shape of everything sound and straight, it was like daylight shredding the memory of a foolish dream. How could 1 bear the shame of repeating before him the soft twisting visions I had built in my head in the magic August afternoon when almost anything could be made to seem real, as I buried the penny and dug it up again? How could I explain that pit-of-the-stomach sickness which struck through the whole day when I had to believe, at last, that it was really lost? How could I explain that I wasn’t really hiding from them'{ How, with the words and the understanding I had then, that the only possible place to run from that awful feeling of loss was the soft, absorbing, dark safeness of bed? That I had cried myself asleep?

“I lost my penny,” I said. I looked at father and turned my face into the pillow. “I want to go to sleep.”

“Danny,” my mother said, “it’s almost nine o’clock. You haven’t had a bite of supper. Do you know you almost scared the life out of us!”

“You better git some supper,” my father said. It was the only time he had spoken.

IK NEW mother would talk about it and talk about it, but I never dreamed of father ever mentioning it again. But the next morning when we had the forks in our hands, ready to toss out the hay, he seemed to hold up the moment of actually leaving for the field. He stuck his fork in the ground and brought in another pail of water, though the kettle was chock-full. He took out the shingle nail that held his broken brace together and put it back in exactly the same hole. He went into the shop to see if the pigs had cleaned up all their breakfast.

“Ain’t you got no idea where you lost -your penny?” he said suddenly.

We walked down the road together, stiff with awareness. He didn’t hold my hand.

“It’s right here somewheres,” I said. “I was playin’ with it in the

Penny in the Dust

I dust.” He looked at me, questionly I but he didn’t ask me what game anyj one could possibly play with a penny S in the dust.

I In making a whistle he could tap alder bark with his jackknife just exactly hard enough so it wouldn’t break but so it would twist free from the wood beneath, though I couldn’t believe he had ever made a whistle for himself when he was a child. His great fingers could trace loose the hopeless snarl of a fishing line that I could only succeed in tangling tighter and tighter. If I broke the handle of my wheelbarrow ragged beyond sight of any possible repair, he could take it and bring it back to me so you could hardly see the place if you weren’t looking for it.

He got down on his knees and drew his fingers carefully through the dust, like a harrow; not clawing it frantically in heaps as I had done, covering even while I uncovered. He found the penny almost at once.

He held it in his hand, as if the moment of passing it to me were a deadline for something he dreaded to say, but must. Something that could not be postponed any longer if it were to be spoken at all.

Do you know how I felt then? I felt as if I had beaten him. His face looked like I had seen it of an evening when mother wasn’t speaking and he would pick up a schoolbook or a paper and follow the lines patiently, though he

never read any other time at all. I had to tell him the truth then. Because only the truth, no matter how foolish it was, would have the unmistakable sound of truth, to scatter that awful idea out of his head.

“I made out it was gold,” I said desperately, “and I ... I was making out I bought you a mowin’ machine so’s you could get your work done early every day so’s you and I could go into town in the big automobile I made out I bought and everyone’d turn around and look at us drivin’ down the streets . . .” His head was perfectly still, as if he were only waiting with patience for me to finish.

“ . . . laughin' and talkin' ...” I said, louder, smiling intensely, compelling him, by the absolute conviction of some true particular, to believe me . . .

He looked up then. It was the only time I had ever seen tears in his eyes.

I wondered, though,why he hesitated and then put the penny back in his own pocket.

YESTERDAY I knew. I never found any fortune and we never had a car to ride in together. But I think he knew what that would be like, just the same. I found the penny again yesterday, when we were getting out his good clothes—in an upper vest pocket where no one ever carries change. It was still shining. He must have kept it polished.

I left it there. it 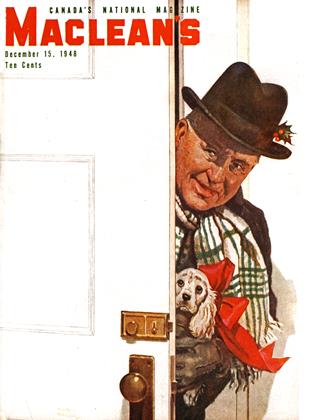