BACKSTAGE AT OTTAWA THE MAN WITH A NOTEBOOK February 1 1948

LIBERALS face the resumption of Parliament in better spirits than they’d dared to hope for two months back. They gathered in December expecting to be torn limb from limb for what the Government had done in the dollar crisis. After a fortnight of contrived and blessed dullness, they went home jubilant. The Opposition, they felt, had missed its greatest chance.

Not even the conscription crisis had caught the Government in quite such a fix. It had spent the whole year drifting down the Niagara and it was right on the brink of the falls before it set about making itself a barrel.

As late as mid-October, only a month before the restriction program was imposed, some ministers were declaring privately that they wouldn t stand for restrictions. They favored a billion-dollar loan from the United States to tide us over until Marshall Plan dollars would begin to flow.

And, in fact, the Government did try to get a big loan. First it tried the Export-Import Bank in Washington, only to find that there isn’t that much money in the bank. rI hen it went to Wall Street for a private loan, and was turned down—or at least offered terms so exorbitant that it was unable to accept. It finally did get $300 millions from the Export-Import Bank, but that wasn’t half enough —restrictions had to come too.

T>UT ALTHOUGH the restriction program 13 itself could be defended, the Liberals really had no defense for the way in which the program was imposed.

Above all else, they feared these questions: Why, acting so late and so hurriedly, have you acted without constitutional authority? Why have you ignored and flouted Parliament? This program by your own admission is one of the gravest steps ever taken in Canada. You have met it by distorting a previous statute, the Foreign Exchange Control Act, to a use for which, you solemnly declared less than a year ago, it was never designed. Why?

The Government had no answers to those questions. It acted as it did because the Prime Minister wanted to attend the royal wedding on November 20. He also wanted to be present at the opening of Parliament, perhaps the last Parliament over which he will preside (though perhaps not, too).

Dollars were running out too fast to allow the dollar-saving program to wait until Mr. King got back from the royal wedding, so, to the great, dismay of some of his ministers, he decided to have the restrictions announced, not as bill to a reassembled Parliament, but over the radio. Parliament could wait until he returned from overseas.

Having got his followers into this mess, Mr. King did plan with great adroitness to get them out again. His program for the short session was elegantly calculated to blur the impact of unpleasant issues, to make for boredom instead of fireworks. He allowed a day for the address in reply to the Speech from the Throne, two days for the Geneva trade pacts, another day or (he hoped) two for debate on the emergency powers legislation which

now had to be extended to March 31, and then— at long last—the rest of the time for debate on the dollar program.

Had Mr. King himself been Opposition leader, he could have blown this strategy sky high. He could have got up on the first day to move:

1. That debate on the address and on the Geneva pacts be put off to February.

2. That the extension of the emergency powers laws, which nobody opposed, be granted without debate. The CCF would probably have agreed; the Government could hardly have objected.

3. That Parliament proceed immediately to debate the restriction program, so the Government might be arraigned and indicted for its unconstitutional procedure.

Instead of taking this line, the Opposition surpassed the Liberal’s fondest hopes. They wrangled for two days over procedure, trying not to bring

the critical moment nearer but to push it even farther off. They argued over emergency powers (which every party finally voted for) two days longer than the Prime Minister had dared allot. To this day, they haven’t delivered an effective blow against the Government’s most vulnerable spot.

John Bracken’s enemies in the party were particularly exasperated to learn that his advisers had not overlooked the constitutional issue. They had prepared a brief on the subject, containing jewels of invective; Mr. Bracken didn’t use it. Later, some of his supporters, Donald Fleming and .lohn Diefenbaker among them, did raise the constitutional point, but it did not have the impact it would have had from the Opposition Leader.

ALL THIS has focused attention on the Pro. gressive Conservative faction which would like (o get rid of Mr. Bracken as leader. A leading Conservative newspaper carried a front-page story by its Ottawa man lately, intimating that plans were afoot to depose him. Another habitually

Conservative paper, one printed for private circulation only, made a savage attack on him in December.

But lately, even his enemies in the party have been wondering whether John Bracken might not have a chance to win for them. Their hope is based on the breakdown of Liberal farm policy.

When Hon. James Gardiner negotiated his wheat deal with the British in 1946, his idea was to offer a low price in return for a stable market. The food talks with Britain in December, even though they did result in a precarious renewal of all the food contracts, still bore out what Mr. Gardiner’s opponents always maintained—that the British market is not stable at all.

Britain is buying Canadian bacon only because Canada insisted that she must. Canada was able to insist, only because we are selling them wheat so cheaply—they can buy the whole Canadian food

surplus, wheat and bacon and eggs and all, for less money than they’d pay for wheat alone in the open market.

The low-price policy has cost the Canadian farmer something like $200 millions so far, and the farmers seem to be realizing this fact. John Diefenbaker, Progressive Conservative M.P. for Lake Centre, Saskatchewan, recently got a letter from a leading Liberal in his riding. This man in the 1945 campaign had been a major thorn in Diefenbaker’s side.

“Mr. Diefenbaker, I have just sold my wheat, and I have figured out the difference between what I could have got for it on the open market, and what the Government pays me. From now on, you may count on my support in Lake Centre. I will be glad to work for your organization as a volunteer in any capacity.”

In this rural disaffection the Tories see a great opportunity, and even his enemies concede that it’s an opportunity for which Mr. Bracken is well equipped. Confidence in the party’s future has risen greatly since harvest time, and is being reflected in contributions to the war chest. ★ 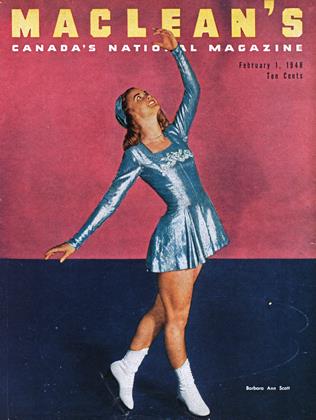