The Pigeon and the Eagle ROBERT ZACKS February 15 1948

I FACED Mike, alone, while we were waiting for Sally. I wished, fervently, I hadn’t run into them, hadn’t accepted their invitation to lunch.

Mike fiddled with his cigarette, staring at it.

The waiter came and took our order, went away.

You sure don’t act like a newlywed, I thought.

I waited uneasily for what I knew was coming. “Congratulations,” I said aloud. Mike nodded quietly.

“Have you heard about Rita?” he asked, shamefacedly.

I stared at him. He wasn’t kidding me.

Mike said, haggardly, “I can’t. I’ll never forget her.” His hand shook a little as he raised his cigarette. I said nothing. Then he looked at me bitterly. “Funny, isn’t it? She was crazy about you and you wouldn’t look at her. I chased her, she chased you. You were really rotten to her. I wish ...”

I didn’t like this. “I don’t care what you wish.

She was treated as she deserved. She was poison.

She used to spend hours telling me how she could make you jump through a hoop.”

Mike was pale. But he had asked for it and it was true. I had no pity. “And you jumped. It was disgusting the way you crawled with everybody in the gang watching. I told her to keep away from me but she wouldn’t. You were there, you heard it?”

He twisted his lips. He hated me, I could see.

“Have you any idea where she might be now?” he asked eagerly.

I The Pigeon and the Eagle

“For heaven’s sake), man, you’re a newlywed, only three weeks married. Sally’s a swell girl. Don’t you love her?”

“Sure,” said Mike mechanically, as if" he’d trained a reflex to keep him out of trouble.

Sally came up to us happily and sat down. She was sweet and small and gentle. She had soft brown hair and dark eyes. “You look like a million bucks, Sally,” I said. “You really look wonderful.”

“Thank you,” said Sally, dimpling. 1 looked at Mike who had a faraway look in his eyes.

“Oh, sure,” he said, startled. He focused on Sally. “Darling, you do look lovely,” he said gently.

Sally looked at him and patted his cheek. Her eyes looked longing and a little sad. We didn’t talk much through lunch.

1 was anxious to get away from them.

“Wait,” said Sally, dismayed. “When are we going to see you again?” As I debated whether to tell her I was in town only for the week end on business, Mike said quickly:

“What are you doing this week end?” He seemed almost anxious. I didn’t like the feeling I got that I was his contact with the past.

Mike said quickly, “I’ve a friend with a cabin cruiser who usually takes us out on the lake.”

Before I could find an excuse Mike jumped to his feet. “Don’t say no until l see what days he’ll be going out. Then we’ll see if it fits in with your plans.”

He was walking to the telephones before I could stop him.

1 TURNED to Sally. I looked for something to say.

“Hey,” I said. “The first three weeks should be like whipped-cream cake. Aren’t you happy?”

Sally grinned wryly. She clasped her hands. She didn’t answer directly. “I suppose he talked to you about Rita?” she said.

“No,” I said quickly. “He didn’t.” “No use covering for him, Joe. He talks about Rita all the time. She always creeps into the conversation.” Sally leaned forward intently. “Tell me honestly, Joe. You knew her better than any of us. She never talked to the girls of the crowd. What was she like? Inside, I mean.”

“You came into the gang late, didn’t you?” I said. I shifted uneasily. “Well, at least you remember she was pretty. Lovely,” I amended. Sally nodded.

“She was poor,” I said, remembering. “And her beauty wasn’t earned. She was just horn with it. She had a tough life as a kid, her family had a hard time. When that happens a girl sometimes turns kind of cruel and wary as a mountain goat. Rita liked good times and Mike always did earn the best money.”

“You had plenty of company,” I said. “It did no good to treat her nicely. If you really want a description, she was a wild eagle, beautiful

and ruthless. You don’t trap an eagle with milk and sugar. That was Mike’s mistake. Lucky he didn’t marry her.” “Why?” asked Sally.

I laughed. I searched for similes. “What would happen if a six-year-old kid grabbed a wild eagle by the legs? He’d he torn to bits.” '

“An eagle,” said Sally, closing her eyes, picturing it. She opened her eyes. “What am I, Joe?”

“You,” I said, looking at lier gentleness, “you’re a pigeon. Billing and cooing, full of fun and curiosity.”

“I like that,” said Sally smiling. “It’s not melodramatic, but it’s me. That’s the life I’d like. Fun and curiosity, billing and cooing.”

“I know,” said Sally. “I’m a pigeon that knows how to build a nest. Twig by twig. I’ll grow into his heart. I’ll get rid of Rita.” She smiled confidently. “Give me a year. One year and my nest will be better than any eagle’s.”

I looked at her with deep respect. She was all right. “You’re no pigeon,”

“My father was a pigeon, my mother was an owl,” said Sally amused. “Tell me Joe, what are you?”

I snuffed out the cigarette. I looked straight at her. “I’m an eagle,” I said.

SHE WAS mighty quick, that girl.

She caught my tone and her eyes widened with sudden wondering and I nodded.

“I thought you both knew,” I said, “or I wouldn’t have stopped you in the street. I’m married to Rita.”

Sally looked at me miserably. I knew what she was thinking. “Don’t worry, Sally,” 1 said. “We haven’t been in town in five years. And we won’t be

A Matter of Paper

Continuing world shortages have greatly affected deliveries of the type of paper this publication normally uses.

Should your copy of Maclean’s contain paper not as good as usual, it is because that is the only way in which the publishers can maintain full service to the largest possible number of readers.

coming in, either. Not now. I’ll see to it that we stay away a long time. You go ahead and build that nest.”

She took a deep breath. A little color came into her cheeks. “Joe, the way you described her. I don’t understand.”

1 tried to find words that would explain. It was very difficult.

“Did you ever see a tiger in the zoo?” I said. “The way it walks back and forth endlessly, restlessly. It’s got a power, a force that has to find expression. A slum kid is like that. A slum kid won’t sit and rot because there’s no clubs or playgrounds. He’ll play hob with crime statistics. You see? Rita had no chance. I said before, there’s a reason people are vicious.”

I grinned. “Rita’s changed,” I said, softly. “And I’ve changed. Just as Mike will change for you.”

I saw that she understood.

I got up. “Good-by, Sally,” I said. “Tell Mike I couldn’t wait. Maybe in about ten years we’ll get together. But I doubt it.”

Sally got up. Suddenly she reached out and kissed me.

Then I walked out. if 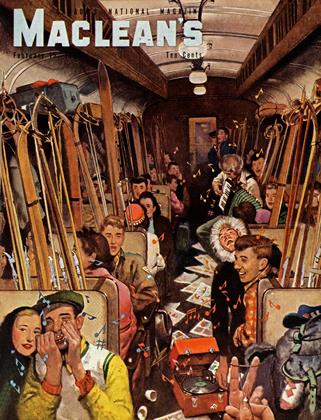