A. C. Lepard’s suggestion that we join the U. S. “each province a state or two” (Mailbag, Feb. 15) is ridiculous . . . How does he propose to divide each province? . . . Let us take Saskatchewan, divide it into two halves, north and south. The north is too thinly populated to form a state. Thus this section would be governed as a territory from Washington, D.C. It is exceedingly unlikely that these people in northern Saskatchewan would welcome this solution ... In Milton High School (where I am a student), we are accustomed to regard Canada as an independent, autonomous nation, a member of the British Commonwealth of Nations and of the United Nations, not as an insignificant satellite of the U. S. . . . If Mr. Lepard looks upon our southern neighbors with such esteem and has so little regard for his native Canada . . . why does he continue to reside in Canada?—Seymour English, Milton, Ont.

• We would be the forgotten people! Just when we are third rung from the top, too! Defeatists have no place in Canada! If he wants the U. S. I suggest it would be easier to move him there than the U. S. here!—George H. Michie, White River, Ont.

In your magazine of Feb. 15, I read your very interesting story “Larceny for Sale” by J. H. Gray. Could you give the address of the firm who publish the Secret Blue Book (advertising

crooked gambling devices) in Canada or the U. S. A., also where to get those carnival equipment and dice games? —M. V. B., Vancouver.

We could, but we won’t—The Editors. Propaganda?

The article, “The Shrine of M. Dionne” (March lj is a blatant and disgusting piece of Romanist propaganda. The entire screed reeks of superstition and idolatry and Hugh Kemp writes as though these unscrupulous traits were commendable.—S. B. Nicholson, St. Catharines, Ont.

I enjoyed reading “The Beaver Comes Home” (Jan. 15). It does one good to read that one of our great Canadians is doing so much good with his money. Then I read that letter from the Saskatchewan reader who claims to be a candidate for euthanasia because she is a helpless cripple, with no home (Mailbag, Feb. 1). I write this in

hope that Lord Beaverbrook will see the picture painted here—old people, old couples who do not wish to be separated, no families, no homes— not wanted! . . . Please Mr. Beaver, come to their rescue with the Beaverbrook Hotels from coast to coast that shall be a monument to one who practiced “In - as - much.” — Montreal Reader.

• In regard to the letter of your Saskatchewan Reader (on euthanasia) I believe she is taking the cowardly way out. I am a Catholic (Roman) and I don’t believe in it. If God had wanted things to end that way for the incurables the Pope would have been guided to take that step. No such thing ever happened and never will.—Leandre LeBlanc, Shediac, N.B.

The article on the Governor-General and his lady (“Inside Rideau Hall,” Feb. 15) is interesting as far as it goes, but so typical of all biographies of Irish people it leaves out the Irish background . . . Do tell us more please. —Evelyn Lyon-Fellowes.

© When are publishers going to wake up and realize that “we, the people” are not reading with palpitations the goings on of -Canada’s GovernorGeneral? To most of us, Pm sure, it’s a colossal pain in the neck, just knowing that we foot the bill for it all. —Oh Canada, Calgary.

Not only did the RCMP officer (in the Yukon) receive the notice from Simpson’s re “sending catalogues to points outside Canada” (as reported in Parade Feb. 15), but we did here in VICTORIA, B.C. ! Maybe someone at Simpson’s should take a course in geography. — Mrs. R. Lawrence, Victoria.

Not Even With a Bonus

I have just been reading several copies of Maclean’s loaned to me by a friend. I found a number of articles that promised to be interesting but in each case at the bottom of the page I was referred to 15-20 or so pages further on. I did not turn to them and I never will, either in your magazine or in any other. My reaction is that I did not want your magazine on my reading table complimentary or even with a bonus. I shall refuse future copies when proffered.—John H. Hall, Winnipeg.

. . . Mr. Baxter’s beautifully phrased, politically revealing, abounding with wit London Letters ... are consistently the most interest ing and bestwritten articles in Maclean’s. For example, consider the recent “Buy Churchill,” (Feb. 15) which isn’t a dry harangue on a politician but superbly written to imbibe a curious, reader. —Stan Obodiac, Yorkton, Sask.

• Beverley Baxter’s . . . style is good and pleasing to read, but is it not a bit presumptuous for him to openly criticize a man of Winston Churchill’s standing, saying that he should have resigned, etc., or he made this or that mistake? God help England today it she had not Churchill to lead, advise, check—in short, give her the benefit of an unmatchable brain and rich everabounding spirit, to say nothing of his experience.—Alice Davies, Georgetown, Ont.

Speaking of drummers, Gordon Sinclair writes in “Beat It Out, Boy!” (Feb. 15) “You’ll find them in school, pipe and town bands from Victoria to Sidney.” Sidney is not far from Victoria—almost a suburb. Also there is Sidney, Man. If, in the quotation, he is endeavoring to span the Dominion then he should refer to Sydney, which is in Nova Scotia.—A. J. Wrigley, Armley, Sask.

In the first paragraph of your editorial “We Can’t Afford to Bar Professors from Politics” (March 1) you say: “We have not seen its full text (a resolution passed by the McGill Board of Governors) but its clear import was that no McGill faculty member . . . ought to take an active part in politics.” It is . . . most regrettable that you wrote such a scathing editorial before seeing the text which has by no means the import you imply . . . (It) reads as follows:

“1. In the opinion of the Board, the duties of the Dean of a Faculty are such that they cannot adequately be performed by anyone who is a member of the Federal Parliament or of any Provincial Legislature.

“2. In the opinion of the Board, the duties of any member of the teaching staff who is engaged on a full-time basis are such that they cannot adequately be performed by anyone who is a cabinet minister or a parliamentary secretary in the federal government or in any provincial government.

“3. The Board has no desire to interfere with the political views or activities of any member of the teaching or administrative staff, but considers it adversely affects the interests of the University for members of the staff to hold positions on the principal executive body of any political party.”

It was subsequently amended . . . by inserting the words “full time” before the word “staff” ... in the third paragraph. As to the first two paragraphs, no one with experience in university affairs would, I believe, offer any objection. Prof. Frank Scott himself agrees they are perfectly reasonable. The third paragraph is undoubtedly controversial, but il certainly does not prevent any member of

the staff from taking an active part in politics. It refers only to a very narrow range of political activity . . . surely does not justify the very sweeping statements in your editorial. It should be added that the Board, though well aware of the political views and activities of Prof. Scott, decided the third paragraph should not be retroactive. — Hon. Associate Chief Justice O. S. Tyndale, Chancellor, McGill University.

real over the Canadian Broadcasting System, piped to a U, S. network and heard here through a local station, gives us the views re the retirement of the Premier. What a day—-for an appreciative reader of Canada’s National Magazine.-.....Fred G. Hugerman,

I have just read “Don’t Sell Britain Short” (By L. S. B. Shapiro, Maclean’s June 1, 1947). This was written some eight or nine months ago and every word is still true today. 1. am taking this opportunity to thank you for putting this in your magazine. To be truthful, it is the first time 1 had this magazine in my possession as it was sent to my friend whose brother sent it to him and so to me ... If the Canadians read this (article) as truth, as they ought to, then we have nothing to fear. We shall pull through! —George J. White, Bexleyheath, Kent, England.

Maclean’s said it in large headlines: Quote “The CBC’s Tower of Babel” (a story about the International Service) Unquote. What a grand truth.—H. P. Hebbes, Canse land, Alta.

I saw your Feb. 1 number in the Detroit Public Library and was amazed to see how you had so completely deglamourized the supposedly pretty and dainty little Barbara Ann Scott. From all other pictures I have seen of her and from descriptions on this side of the border—she appeared to be graceful, dainty and pretty. From your color photo she is dumpy, musclebound and exceedingly strained-looking. Surely the cord in her neck don’t always stand out I ke that — Former Canadian, Detroit.

Maybe Barbara was thinking of Avery B runda ge. 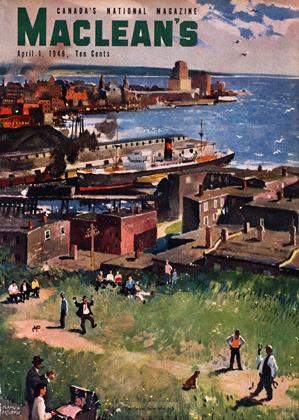