BACKSTAGE AT OTTAWA THE MAN WITH A NOTEBOOK April 15 1948

APRIL 18, the day of the Italian election, may turn out to be a very important date in the history of the world. Conceivably, it could mark the kind of turning point toward World War III that Munich marked the last time.

A man just back from London was asked if he thought the British Government would take any “positive action” if the Communists should win in Italy. He said no, he didn’t see what action they could take at the moment. “But,” he added, “a Communist victory in Italy would have great weight in the British Government’s judgment as ¿o the likelihood of peace or war.”

For this and other reasons, notably the Palestine mess, there has been more real worry in Ottawa about the danger of war than at any time since 1939. It’s no longer routine pessimism, or a distrust of the United Nations’ future; for the first time it’s an urgent, immediate fear.

It would probably be going too far to say that anyone in a responsible position regards war this year as likely. But it is more than a remote possibility.

A fairly heavy straw in the wind floated by last month when a French-Canadian labor delegation asked the Government to pledge itself against conscription for foreign wars. This request has been routine for years in the briefs of Quebec organizations; the answer, equally routine, has always been “yes.”

This time it was “no.” Rt. Hon. Louis St. Laurent told the delegates that sooner or later the ■tussians would have to be told they’d reached ¿heir limit. If war should then follow, “we all must light to preserve our institutions and our liberty -all the democratic nations will be in the same boat and all will have to defend themselves.”

UEBEC LIBERALS are not what you’d call .confident of beating Premier Maurice Duplessis if he calls an election this summer. But at least they have begun to crawl out from under the bed.

One thing that gives them courage is the decision of Quebec’s federal ministers, particularly Mr. St. Laurent, to take an active part in the provincial fight when it comes. Adelard God bout was able to smash Duplessis in 1939 because—and only because the great federal trio of Lapointe, Cardin and Power threw themselves into the fight without stint. They served an ultimatum to the people of Quebec: “Turn out Duplessis or we quit.” And they won.

This year, realistic observers brought back reports that the Duplessis machine would be too strong for the provincial Liberals to buck. Only with federal aid, if at all, could the Grits get back into office in Quebec.

Bor a while, though, there was grave doubt whether the federal ministers would get into the orawl. Liberals expected Duplessis to call an election in June, two months before the Liberal Convention. Their chances of victory in Quebec were none too bright, no matter who helped them. Would Mr. St. Laurent, on the eve of a convention at which he expected to be made Liberal leader, damage his prestige by getting into a losing battle in Quebec?

Duplessis men were quick to play on this theme. They know perfectly well that if St. Laurent is leader, the Liberals will sweep Quebec in (he federal election. So this spring, Duplessis men have been buttonholing Quebec Liberal M.P.’s and saying: “Look, we’ve got nothing against you, we’re only trying to lick this provincial guy. You stay out of the provincial fight and we’ll guarantee to stay out of the federal fight—we’ll let you win.”

If any federal Liberal hearkened to these tempters, he’ll have to go back on the bargain now. St. Laurent has decided to get into the fight, prestige or no prestige, and he’ll expect every backbencher to do his duty.

BUT TH BÍ RE are still a good many Grits who say their provincial party hasn’t a chance in Quebec and the reason, they think, is the lack of a positive program.

Federal ministers are all very well, they say, but just what do these reinforcements amount to? St. Laurent is the only BYench-Canadian member

of the present Cabinet who has any great weight in his own province and even he is no rough-andtumble campaigner. Hon. “Chubby” Power, in the eyes of his constituents, has still as much prestige as he ever had in his ministerial days, if not more, and Chubby does know how to run a political battle. But those two men, plus a lot of energetic but relatively unknown youngsters, are all that Ottawa can lend toa 1 eleaguered provincial party.

It’s not enough, the critics feel. To win, the party would need not only a brace of good federal speechmakers but a program to lay before the electors a good, strong, liberal program that will mince no words, weasel no promises and ask no quarter of the Duplessis forces. They’d like to be able to go to the voters and pledge them things like health insurance, old-age pensions, job security

and so forth. They’d waste no time on the defensive against Duplessis’ “autonomy” program they’d (ittack, slash into him for having neglected his province’s welfare by refusing to accept the benefits of a tax agreement.

If they can sell this strategy to their more cautious and slow-blooded colleagues, Premier Duplessis might find himself with more of a fight on his hands than he thinks.

IN SPITE OB’ front page headlines and hot speeches, the public interest in the Hong Kong argument doesn’t appear to be very strong. At a time when the dispute in Parliament was at its height, the direct public reaction reaching Ottawa was small.

The Prime Minister’s office had no letters about it at all; neither did the National Defense Depart-, ment. Chubby Power, who hit every front page in Canada when he intervened in the debate, got two letters one from a Hong Kong veteran who wanted Pacific pay, the other from a Hong Kong

veteran who said he couldn’t get on with his mother-in-law.

Blowever, your correspondent still feels it his duty to do a piece about Hong Kong. The idea is to recall something now wholly overlooked—i.e., what the original argument was about— and to tote up the score.

1. That the Hong Kong expeditionary force included men who had very little training.

2. That it was sent to Hong Kong without proper equipment.

3. That, in spite of its denials, the Government had warning that war with Japan was imminent.

It therefore, according to Col. Drew, sent halftrained, ill-equipped Continued on page 71

men into what it knew to be virtually a combat theatre.

At the Duff enquiry, it was shown that the two Canadian battalions did get to Hong Kong with no mechanical transport—though there would have been space to carry at least some of their vehicles on the troopship that carried the men. The Duff Report proper was a bit of a whitewash, but the appendix to the report showed clearly that the failure of the vehicles to reach Vancouver in time to be loaded was due to army bungling in Ottawa. Two officers were later fired for this.

On the question of training, the Duff Report went into great detail but left the answer somewhat obscure. Six per cent of the men sent to Hong Kong had less training than the two battalions as a whole. But that, apparently, wasn’t enough.

Major General C. M. Maltby, M.C., who commanded the troops at Hong Kong, said in his official report: “Those two (Canadian) battalions proved to be inadequately trained for modern war under the conditions existing in Hong Kong.” As the Duff Report showed, they’d had next to no weapon training with live ammunition and a number of infantry weapons they had never seen when they left Canada.

The argument of the last month has focused almost entirely on the third charge: That the Government had

warning of imminent war with Japan.

Col. Drew says there was a message from London on Oct. 24, 1941, which gave clear warning of the imminence of war. This is a secret message that hasn’t been produced, so the public can’t form its own judgment of what was meant. But there is an impressive list of witnesses who have denied, some of them under oath, that there was any such warning.

General H. D. G. Crerar, later Canadian Commander in Europe, then Chief of the General Staff: “Information at my disposal during latter part of September, 1941, indicated that outbreak of hostilities with Japan was not imminent.”

General Kenneth Stuart, later Chief of the General Staff: “We had no

information from London, official information or from any other source, that war with Japan was imminent.

In fact, we had been explicitly informed that the situation had improved.” Commissioner Sir Lyman Duff, then Chief Justice of the Supreme Court of Canada: “Mr. Drew urged that . . .

plorable) state of affairs (at Hong Kong) I must blame three factors:

“(a) The general doubt that Japan would declare war against theAllied Powers;

“(b) The weakness of our (British) intelligence system;

“(c) The belief that Japan was bluffing and would continue to bluff to the last. The true gravity of the state of affairs was not reflected in the (British) Embassy dispatches from Tokyo.”

There is no likelihood of settling the dispute over whether or not Ottawa knew war with Japan was imminent because the British have refused to release the five secret messages which are the key evidence on this particular point. The British Government told its own Parliament that it could not release dispatches dealing with “international affairs” — presumably messages between London and “neutral” Washington about the division of responsibility in the Far East if war ! should come.

However, there is a widespread suspicion in Ottawa that this is only half, and the less important half, of the British reluctance. The other factor is the desire to conceal, even at this late date, how bad the British intelligence was on the Japanese situation. ★ 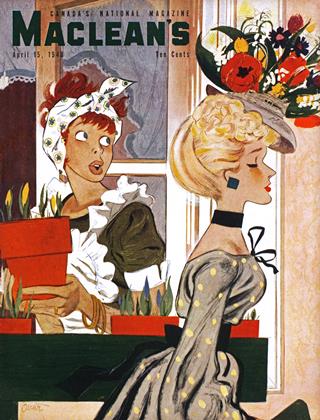