I WISH to put on record that my garden is in bloom, that the sun is shining in a cloudless sky and that my Aberdeen Terrier “Max,” instead of hurling insults at the dog next door, is peacefully sitting on the grass and blinking like a philosopher who has been up too late.

This may seem unimportant unless we follow the idea a little further. There is no reason to doubt that the same sun is shining over the ruins of Cologne and Hamburg and that the Germans are also feeling the rebirth of hope which comes with spring. What is more, the sun, which is never partisan, may be glinting upon the roofs and towers of Moscow, turning young men’s fancies to thoughts of love.

Now, perhaps, I had better abandon this theme lest I am accused of being a fellow traveler, a crypto, an appeaser, or a supporter of Henry Wallace. The idea that the human family still exists is slightly out of fashion at the moment.

In fact, last night in the House of Commons we had a hearty debate on Civil Defense in the next war. Sir John Anderson who was in charge of that task in 1939 struck a cheery note when explaining that flash burns were the cause of many casualties at Hiroshima and Nagasaki. “The very flimsiest protection is sufficient to prevent injury,” said Sir John. “A sheet of brown paper would do.” Perhaps our tailors will be advertising natty brownpaj>er suitings for the atom-bomb season.

It was unfortunate that Mr. Gallacher, one of our two Communist M.P.’s, should have chosen this period in the debate to remark: “I think we are all mad.” There were many other points where the pronouncement would have been more apposite. Mrs. Leah Manning from the Socialist benches expressed what was lurking in most of our minds when she said: “It is a shocking commentary upon our time that we should be sitting in this Chamber t his evening, less than four years after the achievement of total victory, deciding how we are going to protect our citizens against the terrible instruments of slaughter in the next war. This is indeed a tortured generation. Before we have drawn our breath after one war we are getting ready to fight the next.”

Just one more incident and we shall come to our argument. There is a clever young Socialist, Richard Crossman, who went to Czechoslovakia

shortly after the seizure of power by the Communists. Crossman saw everything with cleareyes. Nor did he deny the cynical application of fear and force by a we 11-organized and superbly directed minority.

“It is rather disturbing,” he said when we talked over his visit, “to discover that Communists are human beings.” I almost expected him to adapt Shylock’s words about the Jew and ask:—

Hath not a Communist eyes?

It took a long time for the Communist; menace to rouse the British to any particular fear or action. We had not experienced any plots and arrests such as took place in Ottawa, nor had we felt any necessity to set up a tribunal to discover whether our film writers wore red flannel next to their bodies. Instead we took the view that it was better to let the Communists blow off steam in public rather than drive them underground.

But suddenly Mr. Attlee announced that there would be a purge of Communists in government departments where they had access to defense secrets.

The first impulse was to applaud Mr. Attlee for doing anything so decisive, but in the backs of our minds there was a deep regret that we should adopt the very methods which we condemn in others. There is something hateful in the system of dismissal or even transference without promulgating a definite charge or permitting the defense to be heard. Soon we would be back to the days of the Committee of Public Safety in the French Revolution where the mere charge: “J’accuse!” meant the guillotine.

And why should we stop at government servants? Why not purge those Trade Unions where Communists have a power far beyond their numbers? Why not emulate the U. S. A. and put our authors under investigation, or take a leaf from Moscow’s book and charge our composers with writing unBritish music?

Mr. Attlee must have been under great pressure to have departed so sharply from his own love of liberty and the Continued on pape 40

traditions of British public life. Probably Washington may have intimated that Britain was showing a lack of zeal in the witch hunt. Whatever the cause Mr. Attlee broke with the past and ushered in a new era.

I am well aware that it is easy enough for a person like myself, writing and living in tolerant England, to join with Mr. Gallaeher and say: “I think we

are all mad.” But supposing I were a citizen of Czechoslovakia, living by my pen, and had been dismissed from journalism because of being anticommunist. Would 1 be able to summon t he same reasonableness and urbanity as actuate my thoughts at this moment?

So Were the Nazis

“The Communists are human beings,” declares Mr. Crossman. One searches the mind for a reply.

The Nazis were also human beings. Like the Jews whom they beat to death or drove into the gas chambers, they were warmed by the same summer, chilled by the same winter. They knew the love of wife and family and home just as much as their screaming victims. Yet they perpetrated crimes against their fellow humans that fouled the story of mankind.

Let me recall an incident on the

day of Princess Elizabeth’s wedding. After the ceremony I went back to Parliament and in one of the empty corridors ran into a Communist who shall be nameless but who, nevertheless, had taken the oath of loyalty to the Crown.

“Have you been singing ‘God Save the King?’ ” I asked with perhaps rather elephantine humor.

His reply was to spit upon the floor. That was all. And to give him credit I must say that he spat extraordinarily well.

Quite obviously this was not tk action of a man in a normal conditio of mind. To assume that he would be loyal to his own country in a clash between it and Russia would require both faith and optimism on our part. Because it happened in democratic Britain he could express his views without fear as well as without manners. But if Britain went Communist and if one of us spat in his presence at the mention of Stalin’s name, the sequel might be more sinister.

That is why one must guard against the too-facile philosophy that Communists are human beings like the rest of us. The murderer, the wife beater, the criminal and the pervert are also human beings, but they are enemies of society and have to be treated as such. We would perhaps be wiser to treat Communism as a disease or as a malignant growth requiring the sur geon’s knife. That is why all decer.: men should acclaim the courage and

the wisdom of America in her determination to enter Europe and stop the spread of infection.

It will be difficult to avoid war, yet we must strive with all our strength to save the world from it. Neither the atomic bomb, nor the rocket, nor poison gas can solve this sickness that has come upon mankind. Sir John Anderson’s brown paper may save us from flash burns but it will not prevent the spread of ideas. In Ibsen’s play “Ghosts” the doomed young man in his invalid chair cries for the sun. Today the shadowed, tragic continent of Europe is also crying for the sun. Communism cannot survive beneath clear skies, for it feeds on despair and darkness.

We have entered upon a period which will test statesmanship to the breaking point. To be strong, to be firm and yet to be patient—that is the task that confronts democracy.

President Truman has not closed the door to Russia. That door must not be closed until the last stroke of the 12th hour. Kerenski, who was the stopgap premier of Russia before the final coup of the Bolsheviks in November, 1917, said to me in London: “A nation that has known freedom will never rest until it is free again.” We must not lose hope.

Churchill’s voice kept hope alive in occupied Europe during the war. Somehow we must relight the lamps of liberty in Europe. If Communism has

its fifth column in every country, is there any reason to believe that freedom has no followers even in the police state? It was in France that humanity first heard the magic rallying cry: “Liberté, Egalité, Fraternité.” It was in the 1840’s that Liberalism swept across Europe only to be halted and turned back by Bismarck and Prussia. To adapt Kerenski’s words: “A con-

tinent that has known liberty will not rest until it achieves it again.”

Therefore, and with reluctance, I must take my stand with those who deny to Communism the free play of a normal political philosophy. There are many decent men, moved by genuine humanitarianism, who became Communists so as to hasten the process of social readjustment. These men should now acknowledge the fact that the creed which they honorably chose has become the enemy and despoiler of human freedom. They should detach themselves from it, renounce it openly and work in good faith with existing movements that are working for social amelioration without threatening the rights of the individual.

The ideological war is nearing its climax. If we win the battle then the shooting war need never occur. Only the bankruptcy of statesmanship can bring the horror and blasphemy of a third world war upon this tormented generation.

Europe is crying for the sun. We must dispel the clouds that hide it. 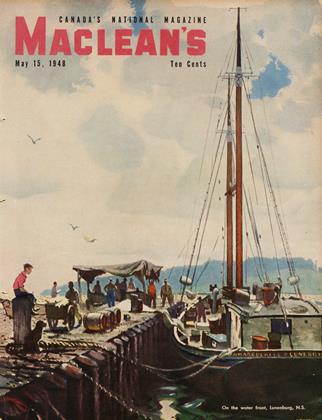