So Bannerman is at it again. In a previous article he says “Our Men Are Mice,” (Jan. 1). Now he says men are “Sheep In Men’s Clothing” (April 15) . . . Although he writes entertainingly of the submissive male, I have a dollar to donate to charity if he will go to any orthodox church on a hot day attired in sports clothes, shorts, open-neck shirt, minus collar or tie, and sit through the service for one hour. —Phil Oropher, Beachville, Ont.

Bannerman has sent $1 to Mr. Oropher. He says he'll wear this outfit anywhere, hut doesn't want to offend any church for what might look like publicity.—The Editors.

Re Mrs. R. Lawrence’s letter (Mailbag, April 1). I was pleased by the reassurance that Victoria is part of Canada. 1 was under the impression it was in Old England.—David Johnstone, Vancouver.

In a “Question of Accent” (Mailbag, April 15) Isaac Newton, Areola, Sask., must have had another apple drop on his head. Her Majesty, Queen Elizabeth, was born August 4, 1900, at St. Pauls, Waldenbury, Hertfordshire, England.—E. P., Victoria.

I have just read Eva-Lis Wuorio’s article on Quebec (April 1). It is a long time since I read anything so beautifully written. It is almost a prose poem.—Charles Hope, Fort Langley, B.C.

I hope you will . . . dispose of wrong ideas that some of your readers may have got from the letter of Mrs. N. J. Claus. Nymegen, Holland (Mailbag, April 15) ... In every country there are henpecked and bossing husbands as well as henpecked and bossing wives . . . I’m a Dutch war bride and left Holland almost two years ago. My married male acquaintances over there are all very helpful to their wives. —K. B. Perkins, Toronto.

I cannot understand criticism of excellent articles by Beverley Baxter (Mailbag, April 15). They are now, and have been for years, in my opinion, the highest point in your magazine.—A. J. Reynolds, Toronto.

• I notice some of your subscribers do not take kindly to . . . Beverley Baxter. A lot of them seem to resent the company he keeps, and perhaps would prefer that you select a correspondent who hobnobs with elevator boys, shines the shoes of the M.P.’s or shovels coal into the furnace that warms them.—W. D. Trichell, Winnipeg.

• As soon as the magazine arrives 1 immediately shuffle through the pages to find and read the interesting and educational story written by my favorite author, Mr. Baxter.—P. S. Parker, Elmsdale, N.S.

May I . . . complain about the “grotesque” art which we are supposed to accept on some of your covers. The April 15 issue is a sample of just what we are supposed to take. It may appeal to some of our modern youth who go ga! ga! over such things, but unfortunately youth are not really the ones who are supporting your magazine.An Old Subscriber.

• It affords me much real pleasure to sitand drink in the beauty of Maclean's May 1 cover . . . This shady corner of our Canadian woods, where the trilliums grow in all their beauty and attractiveness, rivals Wordsworth’s “dancing daffodils” along the wayside. Oh for Canada in springtime!—Mrs. L. Cunningham, Milton West, Ont.

I carefully scanned Dr. E; G. Faludi’s article “What Ails Our Cities” (April 15). I looked in vain for any reference to that incomparable urban gem, North Bay—the southeastern metropolitan gateway to the most strategic three-hundred-mile square block in the Dominion.—Beecher Parkhouse, Fergus, Ont. 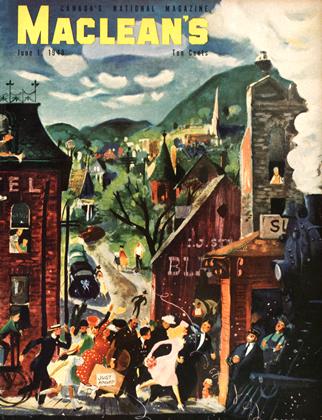