IN THE EDITORS’ CONFIDENCE The Editors June 15 1948

WE HOPE that most of the people who read the two articles on Palestine in this issue will have arrived independently at a conclusion we ourselves were forced into years ago. There is no such thing as a completely objective story on Palestine. That tragic land and the complex currents of its history defy objectivity; anyone who seeks to sort out its rights and wrongs is sure to be so moved and stirred in the process that whatever detachment he had at the outset, he must end up at least a moderate partisan of one or more of the thousand shadings of opinion and belief to which the tangled issues lend themselves.

London Letter about the dilemma Great Britain faced there. We regard it as inevitable that the points of view they express—or that any other two people might express on the same subject— should differ in many respects, just as we regard it as right that both points of view should have a hearing.

®Mrs. Bar-David’s eloquent and dramatic story has a little history of its own. The author, who in partnership with her husband operates a literary agency in Jerusalem, began submitting occasional articles to us in behalf of her clients about a year ago. At first our exchanges of correspondence were brief, polite and businesslike. Then, just before

Christmas, a note Mrs. Bar-David wrote in connection with a client’s work included a short personal aside:

“I can’t help replying to your good wishes for our own safety. I believe, in spite oall common sense, that every bullet has an address on it. In 1936, our hut on the farm was attacked 30 times in 90 nights and we slept on the floor as bullets whizzed about. No one was hurt, not a scratch. In 1937, in Ben Yehuda Street in Jerusalem, a Mills bomb was thrown at me. It didn’t go off. In 1938 I was in a convoy that was attacked —miraculously no one was hurt. Last week, a band of Arabs from Hebron came to our neighboring Arab village (with which we are on excellent terms) and wanted to shoot us and the collective settlement next door to smithereens. The villagers refused to allow it.”

Last winter, along with a fiction piece from another of Mrs. BarDavid’s clients, there was another aside: “Still alive-—though a

bullet did get into the house the other day and landed on a wall.”

Later, in a note attached to another fiction story, the senior partner of the literary agency reported: “Our poor Airedale is

terrified when the shooting gets hot. My six-year-old comforts him by telling him he’s in a bulletproof room.”

0Coming closer to home, we present, on pages 7 and 17, two well - qualified if controversial views on two of the most burning domestic issues now before the country. Arthur R. M. Lower, who discusses some of the possible virtues and defects of a customs union between Canada and the United States, is professor of history at Queen’s University and author of the best-selling “Colony to Nation.” Wallace Goforth, who takes a few vigorous swipes at our national defense policy, is former director of weapons research for the Canadian Army. 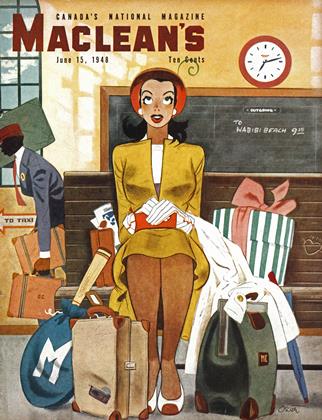