Alberta Has Its Rebels, Too THE MAN WITH A NOTEBOOK July 15 1948

EVER SINCE the late William Aberhart smote the Philistines in 1935, Social Credit victories in Alberta have been taken for

granted. This year the betting is still on Premier Ernest Manning’s Social Credit Government, but the result is not quite such a foregone conclusion as it used to be.

For one thing, there’s been a bit of a split in the party. One minister and one deputy minister were fired, another minister sharply demoted, in a doctrinal fuss a few months ago. The now-defunct Social Credit Board brought in a report which included, among other things, a strongly antiSemitic passage of invective against the “international financiers.” Premier Manning, a sober Baptist, refused to approve the report, and most of his Cabinet sided with him; the result was a Cabinet shuffle, the decease of the Social Credit Board and the creation of a dissenting sect in the Social Credit faith. The original prophet of the movement, Major Douglas, sides with the dissidents.

However, opponents of the Manning Government admit that the schism in the Social Credit party is not itself very serious. The rebels are a mere sliver, with little public backing. They are the extreme wing—Norman Jaques, the federal M.P., is probably the most notorious of them, but they’re all of more or less the same stripe. If they were Premier Manning’s only worry, the Government would be all right.

More important is the fact that a good many Albertans are sore. The Social Credit Government gave a very good deal to the oil companies who struck it rich at Leduc. Farmers who didn’t happen to own the oil rights of their land (and the great majority do not) were less fortunate. The compensation to farmers who owned surface rights only has been meagre; resentment at this has been fanned by envy of the lucky few whose possession of mineral rights made them wealthy men.

It may be symbolic of the whole Alherta situation that the recent revival of the Liberal Party, under Hai-per Prowse, is being hailed with delight by the CCF. Prowse is an able and popular young lawyer; the CCF expects him to pull a good many votes. And they count every vote cast for a Liberal as one taken away from the Government.

Whether or not this judgment is wholly warranted, the once-radical Social Credit regime has come a long way since it fought the banks in the mid-30’s. It has become eminently respectable. Alberta Conservatives, who have no sympathy with the recent attempt to revive Liberalism, are almost openly supporting the Manning Government—they believe it to be as Tory as any reasonable man need desire.

The Challenge, an organ of the “Douglasite” rebels, had this to say a couple of months ago:

“The late Premier Aberhart once remarked ‘When the Edmonton Journal and the Calgary Herald (both Conservative newspapers) are attacking me, I am happy for I know I am on the right track. But if by chance one of them gave me a pat on the back, I would sit down and think hard what I had done wrong’ . . . Alas, gone are those days. The traditional opponents of Social Credit, represented by the Edmonton Journal and the Calgary Herald, no longer find it necessary to attack the Alberta movement. In fact, these two newspapers have, during the past three years, been

almost enthusiastic supporters of the movement.” The $64 question in Alberta politics is this: Have the voters gone through the same process of change as their Government?

The Government, originally elected as a rabid foe of the existing order, has gradually swung around to militant support of things as they are. If the Alberta people feel the same way nowadays, the future of the Manning Government is secure. If not, the CCF will have its chance to move in.

Actually, few CCF-ers have any hope of displacing the Manning regime at the next election. They hold two seats now; they have little expectation of gaining more than another half dozen at most. But they do recall, with a warm little glow, that the party didn’t expect to win more than five or six seats in Ontario, either.

WITH ALL the talk of imminent war, many Canadians are worried about Canada’s relatively small defense program. Is it big enough for national safety?

In Ottawa, the men who plan our defense program are worried too. If war could be expected this

year with reasonable certainty, our program is too small. But, in spite of alarums, and in spite of their awareness that danger has increased in the past 12 months, they don’t believe we shall have war this year, or next year either.

They hear a good deal of alarmist talk in Washington, but very little elsewhere. Everyone recognizes that the danger of an “accidental war,” a war that nobody really wants but that the Great Powers might stumble into, is greater than it was. But the best information Ottawa can gather indicates that the danger of a planned, deliberate attack by the Soviet Union on the Western World in the near future is negligible.

Secondly and this is perhaps an even more important factor in Canada’s planning—it’s recognized that if war should come this year or next, there is no danger of a large-scale assault on Canadian soil. War today or tomorrow would be fought with the weapons of World War II. Exercise Musk Ox proved that, with such weapons, mass operations in the Arctic are impossible. Not until the era of long-range guided missiles, rockets that carry an atomic war head for 3,000 miles to a target, will this continent be in danger of a major attack across the Pole. And that day, if it ever comes, is a full generation ahead.

This doesn’t mean that no attack would be launched on this continent at all. Defense planners soberly expect at least one, possibly more “suicide” bomber raids on the United States and Canada, perhaps as the opening blow of World War III. But they are sure the enemy would be unable to follow up such raids with any real strength. The raids would be diversionary feints, aimed at creating a North American panic and a “keep-the-boys-athome” spirit. The real battlefields of any early wur would lie overseas, in Europe or the Middle East, or both.

In such a war, Canada’s role would be what it has always been—a supply base sending men and materials overseas. Our Navy again would be a convoy force, this time with a deadlier gauntlet to run—submarines are faster now than any the Germans had in action by 1945. Our soldiers and airmen would again be an expeditionary force.

It’s often said that “Next time, we shan’t have a couple of years after war breaks out in which to get ready.” Within a few years that may become true. At the moment, the opposite is the case. The chances are that Canada, and the United States too, would have all too much time to get ready for another D-Day.

For if war should break out tomorrow, there is nothing to stop the Russians from reaching the Atlantic Coast in a matter of days. Their land force, on the continent of Europe, would be invincible—we could not hope to deploy anything that would check them. We’d have to settle down once again, as we did in 1940, to a long grim siege of Fortress Europe.

In such a siege, Canada and indeed the whole free world would have to put forth every ounce of strength. We’d have to endure sacrifices, regimentations that would make War II look like a mere tryout. The British Isles, if they held out at all, would be under fire of weapons to which World War II taught us no effective defense.

It is Ottawa’s judgment that, under these circumstances, the possession by Canada of a “force in being” would be of little or no value. With the Red Army rolling toward the sea, what would it matter if Canada had a brigade group, or a division, or even two divisions, ready for instant action in Canada?

Canada, they think, would need most of all the machinery for fast, smooth mobilization on a total scale. She would need to have behind her the costly research that goes into the most

up-to-date weapons of offense and defense. She would need to have the most massive industrial plant her economy can carry— not mere arsenals, but the basic engines of production on which, in the long run, military power depends.

That is the kind of national defense at which present planning is aimed. To attempt at the same time a “force in being” on any considerable scale would, in the planners’ opinion, create a greater burden than Canadian taxpayers would be willing to bear. It’s a choice, they believe, between a showy but ineffective force on parade, or a pattern of large - scale preparation whose usefulness will become fully visible in the event of war, but not otherwise.

One final consideration decisively weights the balance in favor of the latter course: They see no way, short of peacetime conscription for at least two years per man, of creating a force substantially larger than the one we’re training now.

Expansion of Army and Air Force is being impeded, not by a lack of green recruits, but by a lack of tradesmen. The services haven’t enough skilled mechanics, pipe fitters, machinists and so on to keep a modern force running on any greater than the present scale— indeed, they’re having trouble keeping the ones they have now.

Conscription for training, such as military men in Washington are now urging, holds no answer to this problem.

It takes more than a year to train a tradesman; even if we had two-year conscription the services would get only about six months’ work out of their newly trained men and then have to demobilize them.

Canada’s sailing on the other tack. Ottawa’s policy is to build the best possible machine for rapid mobilization and rapid training when the time comes for calling out every available man “for the duration.” Until then, they think Canadians are better occupied in building up our national ; ccnomy than learning squad drill. ★ 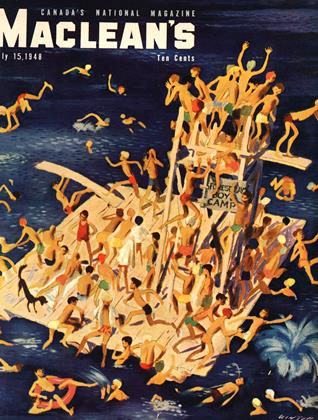