IF YOU had been in the gallery of the House of Commons when Sir Stafford Cripps brought in his Budget last April you would have seen, sitting to the right of the Chancelor on the Government front bench, two men in morning dress wearing top hats. If they reminded you irresistibly of the Mad Hatter that was not their fault. You would have to blame it on their costumes.

No doubt you would find yourself wondering why only two M.P.’s were dressed in this manner and why they sat together. It might even puzzle you to think who they were and what posts they held in His Majesty’s Socialist Government.

Therefore, let me hasten to inform you that they are not members of the Government or even of the Socialist Party. One of them, Mr. Ralph Assheton, is an official Conservative and the other, Sir Andrew Duncan, is an Independent Conservative. Yes, I agree that it is curious and complex but it will all be made clear in a moment.

You must understand that Mr. Assheton and Sir Andrew are the two members for the City of London. At the same t ime you should not confuse the City of London with what the Cockneys call “London ’arf the blooming world.” The City is that magic square mile which contains St. Paul’s, the Bank of England, the Stock Exchange, the Metal Exchange, Lloyd’s, the Hudson’s Bay Co. and all that kind of thing. There is also the Mansion House where the Lord Mayor of London, together with his sheriffs and aldermen, presides, and there are the City Companies such as the Stationers, the Wheelwrights and other survivals of the days when men were craftsmen and proud of it.

Every morning nearly half a million people converge upon the City and perform their daily tasks and every evening they scatter to the dormitory suburbs of outer Ixmdon where they eat, sleep and eventually die. Actually not more than 4,000 people live in the City.

Because? of the unique character of the City and the dominating part it has played in Britain’s prosperity, it has long been allowed a special parliamentary representation. Not only could a stockbroker or a bank clerk vote in his own home constituency, but if he worked in the City of London he could also vote for a candidate there. This was known as “the business vote.”

And because tbest1 two M.P.’s represented the financial centre of the nation they had the special honor of sitting on the Government front bench when the annual Budget was opened, no matter what Government was in power. Hence the presence of the two Mad Hatters last April when Sir Stafford performed his conjuring tricks.

NOW THE story alters. As opposed to tradition with its charm and its absurdities, we must now face the creeping common sense of Socialism.

For many months the Socialist Government was in travail and finally gave birth to a new “Representation of the People Bill,” the first since 1911. And one of the clauses is for the abolition of the plural or business vote and therefore the ending of City of London Representation after an unbroken period of six centuries.

Every argument but one was on the side of the Government. Why would any person have two votes? Why should the City of London have parliamentary representation when only 4,000 people lived in it? Why should finance be deemed something splendid and holy? Why should the Tory Party have two seats in perpetuity, since the City would never vote for any other party? And why look back on the past when we are struggling for our place in the fut ure?

If you believe that two and two make four then there is no answer to any of these questions, although one might ask what two moons and two lemons make. Four what? There is a limit to the wisdom of mere arithmetic, as some of us endeavored to point out in debate.

After all, the Socialists need not stop at doing away with the City of London representation. There is a lot of useful metal in Mr. Speaker’s mace, metal which could be broken up and used for window frames. There are Mr. Speaker’s robes which could be made into curtains or a new-look skirt, for why should Mr. Speaker not wear a sack suit like any worker? You can’t have too much common sense.

independence won by their skill and their courage through the centuries. We have a police force now, and trade unions, so we don’t need these archaic survivals.

However, it must not be thought that the Socialists were indulging in a prejudice solely against the citadel of high finance. In this same “ Representation of the People Bill” the Government has also done away with the university seats.

Again I must explain. In their wisdom or foolishness our ancestors decided that the universities should have “burgesses in Parliament” who would be men of special educational calibre and culture, and would therefore play a part in maintaining the intellectual level of debate. Also, because many university graduates would be drawn into the colonial services abroad, it was only right that they should have a vote and therefore a stake in things at home.

There is no real election contest in the universities. Each candidate prints his election address and it is circulated to the graduates together with ballot forms. The number of seats has altered through the centuries but at the present moment this is the list that prevails:

Now it. is one of the interesting paradoxes of human nature that undergraduates are inclined to be leftish in politics, while graduates veer to the right—perhaps on the principle that a boy of 18 who is not a Socialist has no heart and that a man of 40 who is a Socialist has no head. Let me assure my critics who write to Maclean’s so persistently that I did not invent that saying. It is older than the hills.

Therefore the present group of 12 university members in the House of Commons are, without exception, antiSocialist, although they are not all Tories. Some of my Tory colleagues have accused the Socialists of being influenced in their determination to end university and City of London Representation because they represent a solid block of 14 anti-Socialist seats.

The Socialists indignantly deny that. They claim that they are out to maintain a principle that no man, whether because of business or educational qualifications, should be allowed any more rights in an election than the humblest citizen who can barely read the names on the ballot paper. Democracy must prevail! Equality must replace privilege! One man, one vote!

They are quite right. In fact so strong and unanswerable are their arguments that we have suggested to the Government that a City of London or a university graduate should be allowed only one vote and that he or she would have to choose which vote was to be used, the professional or the dormitory.

But the Government is adamant. Even the appearance of inequality must be expunged from our electoral system. Purity cannot have two faces and privilege must be driven out like a harlot. Demos has spoken.

You will appreciate that my attitude on this subject is entirely objective. As a contemporary historian I subdue the political beast in myself and become the detached and brief chronicler of things as they are.

Therefore, it is in pursuit of the truth and nothing but the truth that ] must carry this argument a step further even if it seems to reflect slightly on the sincerity of my friends, the Socialists. We have seen how they have carried out the decree that Education and Big Business, no matter how enshrined in tradition, shall have no special parliamentary representation.

Very good. But what about trade unionism and the co-operative societies? Must they, too, be denied a selective place in the parliamentary councils of the nation?

It is true that no trade unionist or co-operative can vote twice, but the Labor Party Executive, bringing pressure to bear on local constituency associations, can make certain that a trade union delegate or a co-operative official shall be adopted as the official Socialist parliamentary candidate. It may not be the wish of the local] executive or the local electors but the? authority of the party is strong and the local associations know their place. Thus, in the 393 Labor members in the House of Commons we have over 100 trade union delegate M.P.’s and some 20 co-operatives, financed and supported by the institutions which have; •’nominated them for this honor.

But that is democracy, whereas the special representation of education or the City of London would be privilege. Thus are the murky clouds of the wicked past dispelled by the radiant sun of equality and freedom.

In spite of that I give you my solemn promise that if the Tories are returned at the next general election we shall put back the clock by deliberately restoring the university and City of London seats. And we have informed the Socialists of our intention so to do.

Iam writing this in the library of the House of Commons and in a few minutes the debate will end, the House will be declared adjourned and the police in the lobbies will bellow: “Who goes home?” The Socialist M.P.’s. many of them showing the marks of their hard lives in the mines or the mills, will proudly explain to their friends who have come up to Parliament for a day that the shout of “Who goes home” means that any M.P. can have police protection against the footpads or rebels. “It goes back to the 16th century,” they will say, proudly.

Then there will be a warning cry: “Mr. Speaker!” The police shout “Hats off, strangers!”, the Socialist M.P. stands at attention and bows low as the Speaker passes, preceded by the mace bearer. The Socialist is thrilled and proud. He is part of England’s story, part of England’s tradition. Like Cromwell and Pitt and Walpole he has walked the stone floors of Westminster as one of the nation’s rulers.

In the tower of Big Ben the light has gone out at the top, thus telling London that Parliament is up. The Socialist will tell his friends how that light has never failed to shine except in the war, when it would have guided enemy raiders to their target.

Tradition governs everything at Westminster, for tradition is the great embalmer of wisdom. Y et the Socialists are striking at it, destroying it in the name of liberty, substituting in its place a creeping common sense which levels the spires, the mountains and the dreams of men to an uninspired, antiseptic sanity.

To destroy the cathedral and build the factory! That is the spirit of the times. it 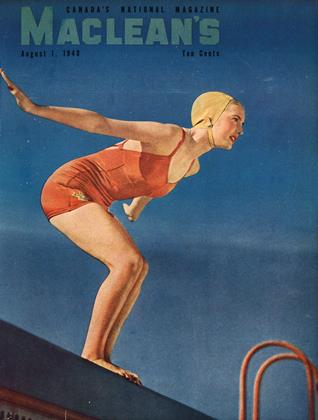