IN THE EDITORS’ CONFIDENCE The Editors August 15 1948

WE HAVE never had the opportunity of sampling Thor Heyerdahl’s singing voice but, even if he can’t croon a note, we’re still prepared to nominate him as the 20th century’s most authentic Nature Boy.

Heyerdahl’s story (page 17, this issue) of his attempt to get away from it all on the Polynesian Island of Fatu-Hiva speaks for itself. But even this unusual adventure in reverting to nature is mere bush-league reverting when it’s compared with a more recent pilgrimage Heyerdahl made beyond the veil of Polynesian history.

This was the famous raft ride halfway across the Pacific Ocean which put Heyerdahl on the front page of every newspaper in the world a few months ago and— more important from his point of view—lent dramatic support to the young Norwegian anthropologist’s favorite theory.

OHeyerdahl maintains that many Polynesian tribes are descended from the pre-Inca tribes of Peru, who were driven out of that country by the more war-minded Incas about 500 A.D. More conservative scientists insisted there was one monumental flaw in the theory: how could South American Indians of 1,500 years ago, with virtually no recorded knowledge of shipbuilding or navigation, possibly cover the 4,500 miles of ocean between their hypothetical point of departure and their hypothetical destination? Easy, Heyerdahl said. They climbed on rafts and let the ocean currents carry them.

This explanation was greeted with some scepticism. To prove its plausibility, Heyerdahl gathered a handful of Norwegian friends in Peru, built a raft of balsa wood, climbed aboard, cast the raft adrift and put the verdict —and his life—in the hands of Neptune. Straight as a homing pigeon, though several weeks slower, the raft bobbed across the waves to Tahiti. Q.E.D.

Of the more conventional part of his life, Heyerdahl has spent a sizeable part in Canada. He

worked for a while as a laborer in Trail, B.C., and, in 1939-40, hi spent six months studying th Kwakiutl Indians of Bella Coola B.C., and Vancouver Island. Whe his native country was overrun b the Germans, he headed for the, refugee Norwegian Air Force’s training base in Toronto, qualified as a parachutist, and later became one of the first officers to jump into Norway.

He’s back in Norway now, preparing for an expedition to thf Andes in search of some moi dope on the Incas.

®We regret to say that as w went to press two of the writers who contributed to this issue were in bed recovering from bites suffered in the course of their leg work. Bruce McLeod, who wrote the story of a forest fire on page 12, was bitten by black flies in Northern Ontario and Hugh MacLennan, who wrote “The Elephant on Parade” on page 7, was bitten by a beefsteak in Philadelphia.

The damage to Mr. MacLennan was the more serious and can perhaps only be appreciated by anyone who has tangled personally with the kind of beefsteak you are apt to encounter at a United States political convention. The beefsteak which assaulted Mr. MacLennan was an especially wiry and savage representative of the breed. Mr. MacLennan, who had been hardened up a good deal himself by a week in the damp oven of convention hall, escaped with what at first appeared to be only superficial injuries. He returned to his home and wrote his story. But then, while treating the swollen gum which his patient suffered along with a damaged tooth, a dentist gave Mr. MacLennan a whacking dose of penicillin. It developed, thereupon, that the patient is violently allergic to penicillin. He had to be rushed to hospital in an ambulance and was under sedatives and the care of two special nurses for a week. 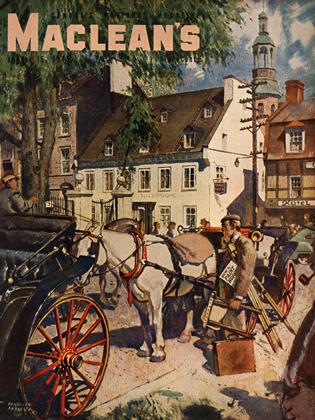