IT IS TIME for anyone who doesn’t know him already to get acquainted with John Foster Dulles. During the last four years he has become one of the half dozen most important architects of American foreign policy. And if Governor Dewey is elected President he probably will be the next Secretary of State.

Dulles is 60 years old, white-haired, rather gaunt, deliberate sometimes halting — in speech. He prefers severe black suits, which, with his sober mien, suggest that he might lx; a clergyman. He is not an ordained minister, but he is a high-ranking layman of the Protestant Episcopal Church. Five years ago he became chairman of the Commission on a Just and Durable Peace of the Federal Council of Churches and won approval of a report which was very helpful in mobilizing support for the United Nations Charter.

Dulles had made his debut in international affairs long before that, however. At the age of 19 he was a secretary at the Hague Peace Conference of /907. He went on to study international affairs at t he Sorbonne. He was a lawyer attached to the American delegation at Versailles in I9IH-I9 and was appointed a member of the Reparations Commission and Supreme Economic Council. Then he settled down to t h«' pract ice of international law in one of the most prosperous law firms in New York.

Governor Dewey sought Dulles’ advice on international alfairs and, during the 1944 presidential campaign, designated him to maintain contact with the State Department. This is what Dewey likes to call t he origin of a “bipartisan” foreign policy, although with resjjeet to the drafting of the United Nations Charter and several other matters, a bipartisan front already was in existence. However, ever since then Dulles has had a voice in most American policy decisions concerning the United Nations and the negotiation of |>ence treaties. In one official capacity (

During these years he has co-operated not only with three successive Secretaries of State but with the Republican leaders in Congress, especially Senator Arthur H. Vandenberg, Chairman of the Foreign Relations Committee. The prospect of working with Dulles as Secretary of State was perhaps the most influential reason why Vandenberg was not unfavorably disposed toward the renomination of Dewey for the presidency this year.

As to policy regarding the Soviet Union and Europe, there have been no really significant differences of view among Secretary of State Marshall, Vandenberg and Dulles. Despite his legal training, Dulles’ outlook is broadly realistic. Despite his religious vein, he recognizes the place of force— military as well as economic-—in preventing war. Recently he has been airing cautiously the idea of organizing underground political and psychological warfare against the Russians in Eastern Europe. His mind may have been turned in this direction by the experience of his younger brother, Allen W. Dulles, also a distinguished diplomat and international lawyer, who during the recent war maintained contact with the antiHitler underground in Germany for General Donovan’s Office of Strategic Services.

Dulles is the only elder statesman *n Dewey’s inner council of advisers. I'he Dewey entourage consists mostly of brisk and efficient young businessmen, lawyers and ex-journalists. Once again his campaign is being managed hy Herbert Brownell, Jr., a New York lawyer in private life. Now only 44, Brownell, by virtue of Dewey’s earlier tries for the presidential nomination and campaign against Roosevelt in 1944, has had more experience in directing national campaigns than any other politician of either party, excepting only James A. Farley, Roosevelt’s first manager, who has retired to the sidelines.

Teamed up with Brownell is a 47year - old Pennsylvania Congressman who served in both World Wars, Hugh

Scott. Scott is a member of the political machine of the celebrated Joe Grundy, for many years representative of the Pennsylvania Manufacturers’ Association and one of the chief backstage authors of the Smoot-Hawley tariff act of 1930. Grundy helped to nominate Dewey this year and the election of Scott as chairman of the Republican National Committee was one of his rewards. Scott’s record on economic and social issues is stiflly conservative, but on foreign policy he has often followed the lead of Vandenberg. In any event, in his new job he will have considerably more influence on the distribution of patronage than on policy if Dewey is elected.

Forty - four - year - old Senator J. Howard McGrath of Rhode Island is managing the Democratic campaign. He is a Roosevelt Democrat who has remained faithful to Harry S. Truman. His task this summer and fall is unenviable, since the Democratic campaign chest is almost empty and few donors, either willing or reluctant, are in sight. Part of the Democratic Party in the South has broken away, both organized labor and the Democratic urban machines are more interested in electing their candidates for Congress and the Senate than in the presidential contest, most internationalist-minded businessmen seem to feel satisfied with Dewey and the Republican platform, Truman lacks wealthy personal admirers and his chances of re-election are not bright enough to make job holders, present or prospective, dig into their pockets.

Neither the Democrats nor the Republicans have ventured to resort to the Wallace device of charging admissions to hear their candidates speak. The Wallace managers not only sell tickets of admission but take up collections from their crow'ds. In stage management or showmanship they have already proved themselves much superior to the traditionalists of the major parties. In sheer brains, energy and ingenuity, they probably deserve even a higher rating than Dewey’s shrewd band. The No. 1 Wallace manager, C. B. (Beanie) Baldwin, 46 years old, organized and ran the CIOPAC campaign for Roosevelt in 1944. Among the numerous private forecasts of the result which I collected on the eve of the 1944 election, Baldwin’s was the most accurate.

Wallace’s managers are still talking hopefully of corralling as many as 10 million popular votes, but seasoned

Republican and Democratic politicians don’t expect him to poll more than half that many and some are willing to make small even-money bets that he won’t go above 2,500,000. This would be less than five per cent of the expected total vote of more than 50 i millions. The strong stand on Negro [ rights taken by both the Republican and the Democratic national convenj tions may tend to lessen Wallace’s anj ticipated appeal to this important mini ority. And the Democrats are counting | on more recent developments with | respect to Palestine to draw back to j Truman part of the Jewish vote which turned away from him in the spring.

The fourth important ticket, formed j by the rebellious Democrats of the South, may poll fewer popular votes than Wallace but it is more likely to take electoral votes away from Truman. Whoever wins a plurality of the j popular vote in any state wins all the electoral votes of that state. In two Southern states the regular Democratic electors already are pledged to the ! “Dixiecrat” ticket of Thurmond and | Wright. At this writing, the regular j Democratic ticket is not even on the j ballot in either of these states. Incredible as it seems, it is possible that in these and perhaps some other states, Truman’s supporters will have no way of voting for him in November. For, as even many United States citizens are prone to forget, you do not vote directly for a President and VicePresident: you vote for members of

the electoral college from your state. You cannot vote for Truman — or Dewey, or Wallace—unless there are electors pledged to him on the ballot in your state. The methods of nominating and pledging electors are controlled by state laws. In Alabama and Mississippi the anti-Truman Democrats have appropriated the regular Democratic electors for themselves. In these, and perhaps some other states, even if Truman’s friends succeed in putting electors pledged to him on the ballot they may have to appear under a new party label instead of the familiar Democratic symbol.

A clear majority of the electoral colj lege is necessary to elect a President ! and Vice-President. If no candidate j receives a majority, 266 votes, the j President is elected by the House of j Representatives from the three men j with the largest number of electoral J votes. Here each state has one vote j —whereas in the electoral college it has j one vote for each of its two Senators ¡ and one for each of its congressional i districts. In a similar way, the Senate | elects a Vice-President if no candidate receives a majority of the electoral college.

A few optimistic backers of the southern “states - rights” ticket are dreaming of the possibility that neither Dewey nor Truman will win a majority of the electoral college. This would open the way for a deal in the House of Representatives to the profit of the southern rebels. They might, for example, throw their support to Dewey in return for the vice-presidency and various assurances as to policy.

Other southern rebels, counting on a Dewey sweep in the North, are hoping that the Thurmond-Wright ticket will get more electoral votes than the Truman-Barclay ticket. On that basis, they hope to establish themselves as the main opposition and so obtain key committee appointments in the new Congress. Still others want only to teach the northern Democrats “a lesson” so that in 1952 the nominee and platform will be acceptable to the South. it 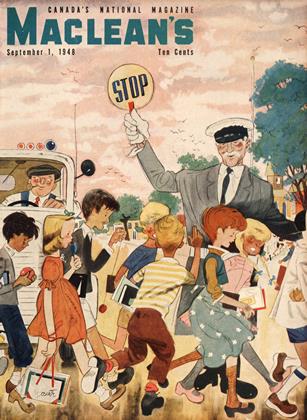