Nursery Knowledge—Since the first four years are supposed to form a child’s character, we can report there’ll be no wild man shortage, Guelph Mercury.

Wrongdoing Exposed—A Baltimore girl was arrested for strolling along a street dressed only in trousers. The bare that walks like a man.—Sudbury Star.

Gasoline Cooker?—A new device that cooks by sunlight is thought to be an adaptation of the locked car left on an all-day parking lot. —Victoria Colonist.

Dear, Dear—The only objection, but a rather serious one, to a period of prosperity is that it costs so much to live through it. — KitchenerWaterloo Record.

and, upon doing so, kill the motor, apply the emergency brake and swallow and digest the ignition key. — Kingston Whig-Standard.

Loose Nut at the Wheel—One

of the worst evils of night motoring is the lighthead behind t he headlight. —Ottawa Citizen.

lion. Wise Guys—Two Japs found on a Pacific island did not know the war was over, which was mighty intelligent of them.—Brandon Sun.

Nobly Done—In England, the House of Lords emerges as the last stronghold of capital punishment. Dikes give way at times but, in this case, the peers held.—Sudbury Star.

body would think I was nothing but a cook here.”

Husband: “Not if they ate here.” —Carstairs News.

Next Trip, No Willie—Little Willie, exhibiting his skill in riding a new bicycle, came down the street in front of his home. “Look, mother,” he cried, “no hands!”

Again he came into view, this time coasting with his feet off the pedals. “Look, mother,” he shouted, “no feet!”

Half an hour passed and little Willie again put in an appearance. This time, somewhat subdued, he gurgled, “Look, mother, no teeth!” —Moncton Transcript.

Bowled Over—A waiter in a very swanky restaurant was horrified to see one of the patrons washing his spoon in the finger bowl. Calling the manager they both hurried to the man’s table.

“Why on earth are you washing your spoon in the finger bowl?” asked the manager.

“For the perfectly good reason,” replied the customer, “that I don’t want to get ice cream all over my pocket.”—Calgary Albertan.

Drama—“For 10 years, 10 long and lean years,” cried the author, “I have been writing this drama, changing a word here, a line there, working on it till my fingers were cramped and aching, my brain and body weary from the toil.”

“Too bad, too bad,” the producer murmured, “all work and no play.” —Montreal Star.

Lost Chord—A man had a cello with one string and used to play on it for hours on end, always holding his finger in the same place. For months his wife had to listen to his excruciating noises. Finally, in desperation, she said: “You know, I’ve noticed

that other cellos have four strings, and the players move their fingers about all the time.”

The man stopped his playing for a moment and said, impatiently: “Of

course the others have four strings and move their fingers about all the time. They are looking for the place. I’ve found it—Montreal Star.

Snakes Alive!—After the flood was over Noah went back to see if all the animals were out of the ark. He found a pair of snakes in a corner weeping copiously. When he asked them what the trouble was, they said: “You told us to go out and multiply upon the earth, and we cannot, for we are adders.”—Calgary Albertan.

“Fine,” he said. “I never saw things so dull.”—Montreal Star.

Doctor Knows Best—Patient: Doctor, are you sure this is pneumonia? Sometimes doctors prescribe for pneumonia and the patients die of something else.

M.D.: When I prescribe for pneumonia you die of pneumonia. —Quebec : Chron icle-Telegraph.

Round Robin New Steno: Where do you keep the round envelopes?

Office Manager: Round envelopes? What do you want them for?

Steno: My boss said to mail out some circulars.— Nanaimo Free Press.

Wigwam Wisdom — A touring American go-getter noticed a lazy Indian chief lolling at the door of his wigwam.

“Chief,” remonstrated the gogetter, “why don’t you get a job in a factory?”

“Why?” grunted the chief.

“Well, you could earn a lot of money. Maybe thirty or forty dollars a week.”

“Why?” insisted the chief.

“Oh, if you worked hard and saved your money, you’d soon have a bank | account. Wouldn’t you like that?”

“Why?” again asked the chief.

“For Heaven’s sake,” shouted the exasperated go-getter. “With a big bank account you could retire and then you wouldn’t have to work any more . . .” 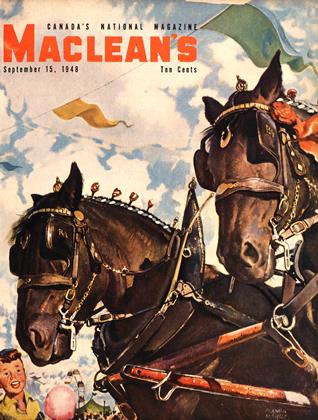