THIS IS London. The parks are covered with dead leaves, a jaundiced sun is trying to pretend that it is still summer, the buses snort and grind their way through the traffic, the barrow boys offer us some pensive-looking pears and apples, and everybody is talking politics.

The great old town looks like a dowager in a faded dress and no make-up. London needs a touch of rouge —and rather more than a touch. It is all very well and creditable to be a thousand years old but London looks more than its age, at any rate to eyes that have been surfeited with the fresh colors of the Canadian scene.

It is strange to pick up the small-sized newspapers again and stranger still to realize how much news and comment they pack into their limited space. But how bad-tempered they are! A group of strikers at Smithfield Market is denounced by the Left Wing journal, The People, as “that crazy gang.” In the Sunday Dispatch the political columnist, Alistair Forbes, has an article in which he asks over and over again whether Sir Stafford Cripps is a knave or a fool. But at least Forbes rules out the thought that he might l>e both.

The Sunday Express has an article called “What Makes a Man Spit at His Country?” Which, you will agree, is an intriguing title. The Undersecretary for the Colonies, who ought to know better, made a public speech in which he said that he passes the Conservative central office every day and often wishes that he had a brick to throw through its window. Not to be outdone, Herbert Morrison has again attacked the Press for distortion.

After the deep calm which succeeded the Canadian election I feel as if 1 have been pitchforked into an English version of a Donnybrook Fair. Even those two old war friends, Churchill and Beaverbrook, have fallen out, causing a political columnist to remark that the honeymoon is over.

unpredictable bombshells. With everybody poised for the coming election the Beaver came out with his own declaration of policy on the front page of the Daily Express. With brevity but force ht* advocated free trade within the Empire, no entanglements of any kind with Europe, the dropping of conscript ion, closer relations with the U. S., no restraint on profits or earnings and a basic wage of £6 a week for all workers. Finally he suggested the creation of an Empire citizenship, and the abolition of a hereditary House of Lords.

It is a tribute to the Beaver that his manifesto was treated as a matter of national importance by rival newspapers. Even the lordly Times gave it space on its main news page.

Beaverbrook offered his policy to any party that wanted it, even the almost defunct Liberals. But there was one clause in it which was aimed like a dagger right at the heart of the Conservative Party. This was to the effect that no Conservatives who were in the “disastrous Cabinet of Baldwin’s 1935 Government” should be given office again.

Thus with one gesture he swept Anthony Eden, Oliver Stanley, Lord Salisbury and a half dozen other Tory leaders into the discard. Churchill might have overlooked that if it had been the only affront in the manifesto, but it undoubtedly served to increase his irritation over the demand that we should also leave Europe to its own devices.

Churchill is a European at heart despite his Anglo-American blood. He has always dreamed of a United States

of Europe, and was the leading figure at the recent Strasbourg “parliament.” Therefore, he undoubtedly felt that he and Beaverbrook could no longer travel the same road. Choosing his words with great deliberation he said on the public platform: “I have read an

election program put forward by Lord Beaverbrook in the Daily Express containing a proposal for an all-round minimum of £6 a week. Lord Beaverbrook is a friend of mine. 1 was very glad to give him his opportunity during the war of rendering distinguished and invaluable service on more than one critical occasion.”

There was a preciseness in the words that had the effect of reducing the Beaver’s war services to a couple of incidents instead of long ministerial service. Gone was the warm generosity of former tributes. Having thus shrunk his old comrade in arms Churchill then stepped on him with this blunt declaration:

“Lord Beaverbrook’s opinions are his own, but it is my duty to say that they must not be taken as representing the considered policy of the Conservative Party. It is certainly not our intention to try and win votes by wholesale promises of higher wages at the present grave time.”

The Beaver has many admirable qualities, but meekness is not one of them. Without any delay he hurled the Daily Express into action with thus comment in its editorial column:

“Mr. Churchill has taken up one item in the Beaverbrook Manifesto and has repelled it with some asperity. That is a matter of real regret, and of surprise too, in view of the Churchill declaration at Brighton two years ago

when he championed a basic minimum standard of life.

“Mr. Churchill was emphatic at Brighton in espousing the minimum standard. Only 50 miles separate Brighton and London, but in that short distance a complete change in viewpoint takes place.”

But that was not all. Having chided the great Churchill the stormy newspaper peer then declared open war.

“Every member and every candidate in the Tory Party,” stated the Express, “must make up his mind and declare himself on this great Imperial policy in all its manifestations.

“And let there be no mistake. Steps will be taken ta see that the candidates do give a clear and comprehensive account of their political faith.”

In other words the Tory candidates will be asked in effect whether they reject the announced attitude of their leader. Already some of the Tories are sizzling with indignation and may boil over at any moment. Most of them never had much love for Beaverbrook and there is always resentment when a newspaper proprietor takes the field against the politicians. Even that section of the party which has been critical of Churchill’s leadership in opposition will not turn toward Beaverbrook for the reason that he is out to destroy their idol, Anthony Eden.

This is not the first time that Churchill and the Beaver have quarreled. They have been friends for 40 years but politically they are incompatible. When Churchill, as Chancellor of the Exchequer, went back to the gold standard in 1925, Beaverbrook denounced him with all the license of ink. Churchill hit back and it was difficult to believe that they could ever be friends again, but each finds pleasure in the other’s aggressiveness and they did not stay long apart. When the war came Churchill turned to Max and found in him a great companion and colleague in the grim hours of the French collapse and the Battle of Britain. But they were grim hours in more sense than one. Churchill always has a sleep in the afternoon, and kept up the habit during the war. But at 2 a.m. or 3 a.m. he would be in terrific form discussing the progress and problems of the war with ministers and generals.

“He’s killing me,” Beaverbrook said once to me, and certainly his face was pale and drawn with fatigue. “I get no sleep.” There were similar laments from staff officers who felt the strain of taking decisions in the grisly hours when their minds and bodies were utterly weary.

Undoubtedly Churchill leaned heavily on Beaverbrook for his aggressiveness and unswerving personal loyalty. In (he last desperate days of the French collapse Churchill decided to fly to France in an llth-hour gamble to keep

her army fighting. In some ways it was a reckless decision for there was confusion everywhere and the Germans were sweeping forward like a torrent.

Churchill took a pistol with him -—and Beaverbrook. “If they get me,” said he, “I’m going to take at least one German with me.” So they roared into the skies and made for the inferno across the Channel.

When the war was over and the general election took place Beaverbrook unswervingly supported Churchill but damned the Tories. “He’s backing the jockey and betting against his horse,” said one of the smokeroom wits. When the Socialists swept into power the Express newspapers attacked individual Tories but always praised Churchill. It seemed that the Beaver had determined that here was a loyalty that transcended every other consideration. Never even a suggestion of criticism appeared in the Beaverbrook newspapers. Churchill, like Caesar’s wife, was above even the suspicion of error.

But now the silken thread has snapped. Personal affection will remain but political tempers are rising and it will be hard for both of them to keep their words to the polite level that I have quoted. Each is dogmatic, hottempered and each has the gift of words. Yet the split was probably inevitable because it is in essence an ideological clash. Beaverbrook has never swerved from his belief that the British Empire is a garden that should be surrounded by a high wall, with Americans allowed to look in as visitors, but no one else. When events were sucking Britain into Europe during the rise of Hitler, the Beaver was counseling the nation to draw back and turn its face to the Imperial heritage. The mantle of Joe Chamberlain had fallen on him and he never discards it.

Now, as Britain sags to her knees from the harsh blows of world economics, the 70-year-old Canadian newspaper peer calls for an Empire minimum wage, an Empire citizenship and an Empire customs union. “Beware the European avalanche!” he cries. “Draw back before it is too late.”

But Churchill’s ancestor, the Great Duke of Marlborough, marched his armies through Europe. In two world wars Churchill was First Lord of the Admiralty in the struggle against European dictatorship. To him geography and history bind Britain to Europe and it is madness to imagine that imperial isolation is possible.

“You are wrong,” roars Max.

“Not even you can alter the map of the world,” answers Winston.

Yes, Britain is in a quarrelsome mood, and the election when it comefc will be fought with much bitterness. But the sooner we have it the sooner we shall get back to sanity and unity.

I often wonder how it was that so lovely an island as this should have reared so controversial a race. Coming home on the train from Liverpool after the Canadian visit, once more 1 came under the spell of England’s gentle, undulating meadows. You cannot fondle or caress a mountain but you can stoop down and pat an English field as you would the head of a favorite dog.

'There should be only poets and peasants here, weaving reality out of their dreams. But destiny made this country a mother of nations—and the mother is tired and irritable just now.

She needs a hair-do, a face massage, a new frock and a decent dinner. But perhaps she will have to content herself with just a new Parliament, ic 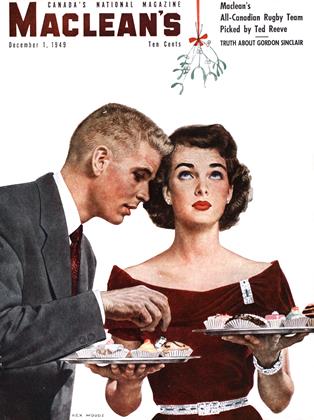