A WAKING tardily after a late night recently, a young fellow in Winnipeg dressed in such a rush he didn’t discover until he was halfway to work that he’d forgotten to put on a tie. Executing a hasty detour via a big department store, he slid to a stop in front of the tie counter, grabbed one off the first rack he spotted and waved the cravat like a sailor in distress, trying to catch the attention of a clerk. It was no use at all: the clerks were all engaged in animated post mortems on the parties they had attended the night before. Finally the customer put the tie around his neck, knotted it, and after one last desperate look about him, fled to his office, already half an hour late.

He came back after work to pay up, of course. But now it was within a few minutes of closing and the clerks were all too busy planning more parties and paid no attention. The fellow shrugged, tore off the tie, hung it back on the rack, and went home.

The lady had emigrated from her native Sweden many long years ago, and was beside herself with delight when a friend from the old country came to visit her in Canada. When the station platform tears and kisses were over, the lady asked her friend what was in the small, heavy package under her arm.

“My radio,” was the reply. “It is a nice little radio, and I have brought it all the way from Stockholm.”

The expatriate’s round pink face lit up. “Ah, good !” she cried. “Now we can hear again some real Swenska music!”

An obliging bachelor in Canterbury, N.B., did a spot of baby sitting for some friends the other night. He and his three-year-old charge were old pals and there was no trouble at all. The bachelor naturally wasn2t any too familiar with the mechanics

of junior-size nightwear, so he asked the little fellow how the one-piece pyjamas went on. The lad turned them over, studying them carefully, then passed them back to the sitter.

“Porridge goes in front,” he said.

A couple of Christmas stories have reached us which make seasonable reading as the bill collectors patrol the streets. First concerns the staff of a finance company in Belleville, Ont., who so love their boss that they chipped in and bought him a beautiful electric clock for his desk. They stayed late, the night before Christmas, to get it all rigged up on the desk and flanked by an oversize greeting card. Then the office wit discovered the clock had an alarm, and set it to go off at 9.30 so it would greet the old man just as he hung up his hat and coat next morning.

Well, the rest followed like clockwork. The alarm went off promptly

at 9.30 the same night, of course, and its faint tinkling thoroughly aroused the elderly lady living in the apartment upstairs. “Burglars,” she yelled via telephone to the only man on the staff whom she knew—and the only one, it also happened, who didn’t know about the big surprise. He relayed the message to the boss, then raced him down to the office. The boss won, though, and the staffer burst into the premises just in time to find his employer standing in the doorway of his private office, gun in hand, staring blankly at the tinkling clock and the big sign, “MERRY CHRISTMAS, BOSS!”

When it came to raffling off Christmas turkeys, the president of the Rotary club in Penticton, B.C., set the pace in selling tickets. So a good-natured cheer went up when the day of the draw came and the prexy won the first turkey himself: but then he won the second bird —and the third.

Hastily the president hammered for silence, and blushing profusely, suggested that the third bird be raffled all over again. Two-bit tickets were hastily circulated among the crowd gathered for the draw, and needless to say everyone bought one to help the charitable cause. Everyone including the president, who won this time, too. 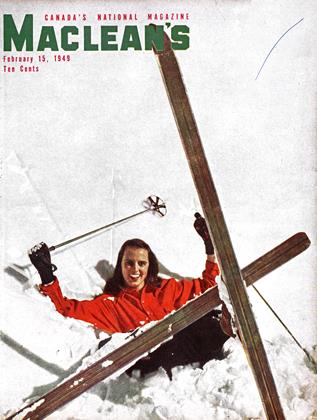