CONGRESS this session will be de bating international issues and passing measures which would have once been called epochal and perhaps still deserve to be regarded as such. But today they are talked about in the corridors of the Capitol and over luncheon tables in a matter-of-fact way as if they were just ordinary congressional business. This attitude is telling evidence of the changed outlook of the American people—or at least of a majority of American politicians.

The gift of some arms to Western Europe almost certainly will be approved—although perhaps not on a large scale—during the next 12 or 15 months. Indeed, some Senate leaders and some top officials favor going ahead with authorizations and appropriations for these shipments without waiting for formal action on the North Atlantic defense pact.

The State Department hopes that the North Atlantic regional security treaty will be passed by late winter. In a general way, sentiment in Congress and especially in the Senate is overwhelmingly in favor of such a pact. If the commitment parallels that made at Rio with the Pan-American republics there will be no difficulty about ratification. If it goes much beyond that—as some of the European partners would like to have it—the debate probably will be protracted.

In another aspect of foreign relations, the Democratic leadership has set early deadlines for renewal of the Reciprocal Trade Agreements Act and new appropriations to keep the Marshall Plan going.

The Reciprocal Trade Agreements Act allows the President to cut tariffs as much as 50% without reference to Congress. When the 14-year-old law came up for renewal last year the Republicans would extend it only one year and they put a restriction on further tariff reductions.

The President and the Democrats want the law renewed in much the same form as Secretary of State Cordell Hull first drafted it. They want it made permanent. And they want this done before the Geneva trade conference scheduled for April 11. It looks very much as if they would have their way.

New Marshall Plan appropriations will be needed by March 31, when present funds will be used up. Congress almost certainly will provide what the Administration asks. There will be demands, though, for greater pressure on the European partners to work toward political unity. The idea of a United States of Europe, or Western Europe, is popular here; Dewey advocated it during the campaign.

Multiplying signs of a mild economic recession are holding back the Administration’s request for tax increases. The Government’s economists are nearly unanimous in holding that no serious economic decline is in sight, but they are divided about the wisdom of increasing taxes. Some hold a rise of three or four billions in taxes is necessary to prevent inflationary pressures from

becoming dominant again. Others say such a rise would precipitate a sizeable economic setback.

The latter argument finds favor in Congress, where few men really want to vote for tax increases unless they must. A moderate tapering off of corporation profits would quieten the demands for an excess profits tax or increase in the regular corporation tax, now 38% on netincome above $50,000.

Declining living costs and smaller corporation profits may also take the edge off labor’s spring wage demands. But the unions are pushing hard for drastic revision of the Taft-Hartley Labor Relations Act before they begin bargaining with employers again. They expect to cash in on the victory of Truman and the Democratic Party, but they are discovering once again that the Senate is an unbossed and unbossable body which won’t give the unions everything they ask for.

President Truman’s inaugural address was not written by Dean Acheson although it might have been, for it expressed accurately the new Secretary of State’s own basic views. In particular, the President’s fourth proposed course of action-—technical aid and capital for underdeveloped parts of the earth—was in line with Acheson’s longheld thesis that the answer of the free world to Communism must Ire dynamic.

Mr. Truman’s fourth point showed he was thinking of giving more impetus to the work of such existing agencies as the World Bank, the United States Export-Import Bank, the Food and Agriculture Organization of the United Nations. He promptly assigned a committee of officials to draw an enlarged and co-ordinated program of loans and technical aid. Increased private investment abroad also will be encouraged.

The President’s fourth course was not intended to be a temporary form of aid, such as the European Recovery Program, but a permanent policy having as its objective a progressive rise in living standards throughout the world, or at least in the non-Soviet areas. Some people still refer to him patronizingly as “the little man,’’ but there is nothing small in his ideas about the future of life on this planet. 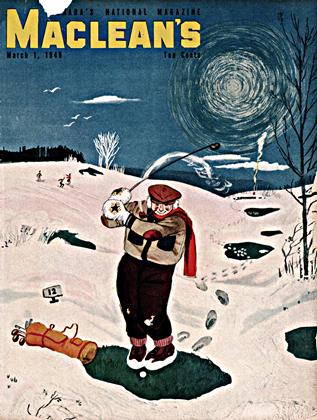