IN THE EDITORS’ CONFIDENCE The Editors March 15 1949

to the post of associate editor of Maclean’s. A seasoned newspaperman and magazine executive with 15 years’ experience in city rooms from Saskatoon to Toronto, a former war correspondent (Germany and Japan) and RCAF officer (France, Italy, Libya, Syria and points north), Mr. Clare has been staff writer, fiction editor and article editor on Maclean’s. This means he has pretty well run the gamut.

In his spare time Clare writes short stories, some of which have appeared in this magazine. In the fall he becomes a rabid football enthusiast. He loves chile con carne and chow mein, but despite this managed to knock his weight down to a lean 200 pounds after a fierce diet that left our office shaken.

The article editor’s chair, vacated by Mr. Clare, has been taken over by Pierre Berton. Mr. Berton, who has written some 30 articles for us, has often winced under the blue pencil of merciless former article editors. He has shown that he can take it. Now he’s being given a chance to dish it out.

0Bob Kesten, free-lance broadcaster and newspaper columnist, says he wrote “Jing-a-low for All That Dough!’’ (page 22) to get back some of the money he lost on the ace-away tables at Whitehorse, Y.T. Not only did the upkeep of the dice come high, Bob reports, but less exciting items such as food were expensive. Just

to give you an idea, a hot roast beef sandwich cost a dollar, a glass of milk 25 cents and Kesten’s favorite 10-cent cigar was 25 cents a copy.

Kesten, who comes from Winnipeg, is a former manager of CJBC, Toronto, one of the CBC’s Dominion network outlets. He was with a radio unit of army public relations during the war and remained in England after VE-Day to do special events broadcasts for the BBC. On one assignment he described efforts in St. James’s Park to remove an unexploded bomb while standing on top of the bomb itself.

#Malak’s photographs of Canada’s Supreme Court on pages 8 and 9, illustrating the article "Seven Wise Men,’’ are the first ever taken of the present complete court on the bench. Malak, an Ottawa photographer, was deeply impressed by his assignment from Maclean’s to picture the justices in their formal robes of scarlet and ermine. He said of his experience: “Photographing the Supreme Court was the realization of a childhood dream. As a child in Armenia I had read of the judges in Canada who were appointed for life so they could render justice uninfluenced by politics or money. In the country of my birth justice was, for many years, almost all the time on the side of those who could pay the most. Canada then became to me a lamp of justice and I always hoped that one day I would see the country and its courts." 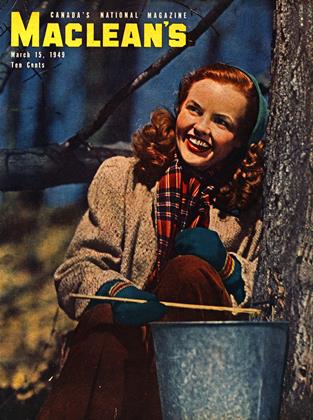