SOMETIMES in the affairs of men there are coincidences of such a striking character that one feels as if the gods on Olympus were playing some ironic poker game with human destinies as the chips.

Within the space of a few days we have had the death of Jimmie Thomas, the Cockney engine driver who rose to Cabinet rank, then was found guilty of corruption, and the report of the judges of the Bribery Tribunal which sends another ex-railwayman, John Belcher, into the political limbo.

The last time 1 saw J. H. Thomas was on a wild November day in 1939. I had only once seen him since the tragic day in 1936 when, arraigned for corruption in company with Sir Alfred Butt, a Tory M.P., he made his resignation speech and walked from the Chamber with tears running down his face. A tribunal had found Thomas guilty of divulging Budget secrets to bis friend.

On such occasions Prime Minister Baldwin was at his best. He neither condemned nor criticized the men whose political careers had been so tragically ended, but he spoke of the honor of British public life which no man should injure or conspire against. Then, with his country-squire blunt ness, he said: “These

men have done wrong and they have paid the price. But which one of uscould put before a tribunal every banking, business and private transaction of recent years, as these men did, and honest ly say that there is nothing that we would not willingly expose to the light?” I almost expected to hear the words, “There but for the grace of Cod go 1.”

Thomas, after being a spectacular political figure for two decades, wen* out into that twilight which can only end with death. When last week he died he was not more than a small one-day news story. One or two diarists recalled anecdotes such as when he said to the Earl of Birkenhead: “I ’ave an ’ell of an ’eadache,” and Birkenhead replied: “Why not try an aspirate?” But no one thought it Continued on page 49

worth while to portray him as he really was—a significant figure in the rise of the Labor Party to power.

At the time Thomas was condemned, 31-year-old John Belcher was wearing the black coat of a railway clerk. His father was a sergeant-major in the regular army and the son had inherited his tall military bearing. They were poor, but young Belcher had done well at his council school and had managed to take a course at London University where he came under the socialist influence of William Beveridge and Professor Laski.

Belcher’s hair was strikingly dark, his face long and rather solemn, and his voice as deep as a diapason on the organ. Like Jimmie Thomas he worked for the Great Western Railway and, like him, he became a trade union secretary, but never approached the importance of Thomas.

In 1945 Belcher stood for Parliament and was elected. At that time I suppose his salary was something like £350 a year, with perhaps another £150 a year from his trade union. It was sufficient for him to live modestly in a North London suburb and to raise a small family. But with high taxation and inflationary prices plus purchase tax it meant that the expenditure of every sixpence had to be watched. His wife, however, was a sensible young woman and budgeted carefully, even contriving to save a little each week out of the housekeeping money.

If if had not been for his success at the polls the Belcher story would probably have been no different from tens of thousands of ordinary families living in Acacia Road until such time as they had earned a modest gravestone in the local cemetery.

For the first six months of the Parliament that was elected in 1945 we looked upon Belcher as no more than one of the many unknowns who had turned up as Government supporters. 1 cannot remember whether lie made any speeches as a back bencher, but nevertheless he was a definite personality, something which could not be said of everyone sitting opposite us.

The Government had done one tiling for him which must have caused great rejoicing in the Belcher household it had raised his salary as an M.P. from £600 a year to £1,000 This was not on the grounds of personal merit since it applied to all of us.

They Had a Lodger

In the Conservative Party we received this “rise” with mixed feelings. Few Tories devote their whole lives to politics unless they become ministers, and we had looked upon the previous £600 a year merely as a contribution to secretarial, correspondence, telephone and travel expenses which have to be borne by M.P.’s. Unfortunately, this increase to £1,000 now made it possible for a man to live on his political salary, which suggested that we might soon begin to breed a type which Britain has never wanted—the professional politician. However, if meant a lot to a man like Belcher who could not possibly carry on his work as a railway clerk and also sit in Parliament.

It was in January, 1946, that he was appointed Parliamentary Secretary to the Board of Trade. As Sir Stafford Cripps was then President of the Board of Trade it could only mean that he had taken notice of Belcher and must have been impressed by him. It is

true that the appointment was made by Prime Minister Attlee and might have originated with him. but a Minister as powerful as Cripps would not have accepted Belcher as his parliamentary second-in-command if in any way doubting his abilities.

As Parliamentary Secretary Belcher received £1,500 a year, and was also allowed to take £500 of the £1,000 due to him as an M.P. On paper it must have looked to the Belchers like treasure from Aladdin’s cave, but actually it was nothing of the sort.

His constituency expenses as an M.P. would wipt* out the £500. As for his ministerial salary of £1,500, he would be allowed no deduction for expenses of any kind, and could merely claim the small allowances which soften the lower portion of a man’s earnings. With income tax at nine shillings in the pound it will be seen that the Belchers had advanced socially and politically but not very far financially. In fact, they took in a lodger, a genial Socialist M.P. from the north, to help out the family budget.

In a period of shortages and government controls the Board of Trade holds industry in its grasp. Every day of the

week businessmen bring pressure, and legitimately so, on that department. And since the President himself would not be accessible, except on rare occasions, the task falls heavily on the Parliamentary Secretary. Thus we have business executives with large salaries and unlimited expense accounts making personal contact with a minister whose net salary is little more than that of a clerk. In all countries businessmen prefer to talk things over at lunch, or at supper, or in the cocktail hour. A junior minister is therefore always the guest because he cannot afford to be the host.

This, I claim, is wrong. Why should the state be such a niggardly employer? Why should a minister always be at a financial disadvantage with those who seek concessions from him?

Belcher was a friendly fellow, a good companion, and had a natural taste for expensive wines. It is much easier for a poor man to accustom himself to luxury than for a rich man to learn the grim technique of poverty. It must have

been good champagne that Belcher drank or he would have seen through the cordiality and flattery of the unpleasant types who were establishing an influence over him.

Yet even with them there is a certain compensating factor. Some were just cheats and tricksters, but what of the others?

Rebecca West put it admirably in a penetrating article on the findings of the tribunal: “But the rest -though

here one must take care to differentiate between the businessmen and the spivs -struck one as being in varying degrees frustrated creators. They all had a certain flash of energy and imagination which counted for their prosperity. They were businessmen because they had liked doing business, making and selling things. They had been praised for their enterprise in the past. Now they found themselves hemmed in on every side.

“One wanted to sell furs which were attracting moths in a warehouse; one wanted to repair an hotel for the tourist traffic; one wanted to keep a factory going which was employing 200 workers in Margate to his and their profit; one wanted to export whisky for dollars.

“But. they had a case. They had wanted to do their job, which the whole world told them was for the good of the country and themselves, and they had to apply for licenses, and had either been refused them or had met with interminable delays.”

The Communists are shouting that it is Capitalism which is the villain, because Capitalism in its evil pursuit of profils is essentially dishonest. To a lesser degree the Socialists sa v the saíno thing, although they do not try to defend either Belcher or George Gibson, the lifelong trade unionist who has had to resign his directorship of t he Bank of England and lus $4,000 a year chairmanship of the North West Area Bower Board.

That charge cannot, be sustained. There never was a period in Britain’s history when personal and commercial honor stood as high as during the century of Capitalism from the Bat tle of Waterloo to the 1914 war. Foreigners in distant parts of the world would do bargains with each other “on the word of an Englishman.” Nor did a director of the Bank of England ever have to resign on t he charge of corruption until -the hank was nationalized.

A Gold Watch, a New Suit

Even if the Socialists indict Capitalism as dishonest I will not retaliate by accusing them. I believe that the standard of honesty is very high in the Labor Party, but the fact remains that the Socialized State, with its expanding patronage and controls, must bring temptation to the cunning and the wea k.

it is the tragedy of a great and honorable nation.

The myriad - minded Shakespeare might have foreseen the pitiful story of John Belcher when he wrote that the theft of a man’s good name does no benefit to the taker hut leaves the victim poor indeed.

What did Belcher get in exchange for his good name? A gold watch, a few bottles of wine, free drinks and free food under the guise of hospitality; a new suit, a holiday at a seaside hotel. According to the judges he took these things knowing that the intention was to influence his decisions as a minister. There is no evidence that he was offered or that he accepted money.

Now, like Jimmie Thomas, he must walk into the twilight. ★ 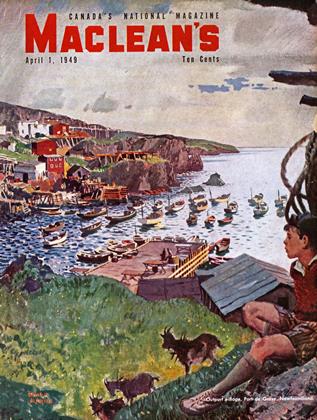