asked what plans were ready for public works in the event of unemployment developing.

Ever since the White Paper on employment and income was tabled in 1945, official Government, policy has been “advance planning of all necessary and desirable Dominion projects so that there may be available a ‘shelf’ of soundly planned projects, ready for execution when prospective employment conditions make it. desirable.” In the recesses of the Rt. Hon. C. D. Howe’s temporary buildings, some 30 engineers have been toiling for 3]/¿ years on this “shelf” of deferred works.

They were the forgotten men of Ottawa. The impression was widespread, even among opposition parties, that they had projects at least in the blueprint stage to provide anywhere up to a million jobs.

When Hon. R. H. Winters, now Minister of Reconstruction, produced the answer to the CCF question, it. turned out that the “shelf” amounted to a maximum of 17,000 jobs in all Canada—and that maximum would last, for only a few months at best. By the end of a year the total employment on “shelf” projects would be down to 5,000.

M. J. Coldwell, the CCF leader, was so amazed at. this reply that he asked if it. had been a misprint. It wasn’t. The truth is that the so-called “shelf” is more like an attic trunk—it contains the odds and ends of work projects which, for one reason or another, the Government doesn’t want to start now.

It’s no fault of Bob Winters that the Government’s “shelf” belongs in Mother Hubbard’s cupboard. Winters took over the Reconstruction

portfolio only a few months ago. He spent the first month fighting a byelection in Digby-Annapolis-King’s, the rest of the time neck-deep in the problems

of housing. He looked just as astonished as the CCF, and even less gratified, when his officials produced the answer to Mr. Coldwell’s question.

Engineers in the deferred-projects division aren’t to blame either—they did all the work that was given them, and did various pinch-hitting jobs on other projects as well. The Government simply hasn’t followed the “policy” of 1945.

This is not by any means the total of what the Government would be prepared to do to stimulate employment. The paltry “shelf” program doesn’t include the trans-Canada highway, to which Ottawa is now pretty well committed. It doesn’t include the St. Lawrence seaway and power development, which has a good chance of approval by the United States Congress this year. It doesn’t include such projects as the Canso causeway to link Cape Breton Island to the Nova Scotia mainland.

The “shelf” covers only those projects on which all preliminary work has been done—plans completed, sites acquired, everything ready for the letting of the contracts. If the Government hadn’t made such a fuss about it in the election campaign four years ago the matter would hardly be embarrassing.

As it is; “public investment” joins health insurance, old-age pensions, and all the rest of the 1945 election platform as a ghost to haunt the Liberals in 1949.

and the Progressive Conservative party. The price: settlement of the

Ontario separate-school problem to the satisfaction of French - Canadian Catholics in Ontario. The terms: cash—before the federal election.

No public promises were made, but many French Canadians believe, rightly or wrongly, that before the provincial election in June Premier Drew had privately engaged himself to give French Canadians what they want in Ontario schools — more money, through a share in corporation school taxes, and the present bilingual school system left as it is.

It was in the belief that Mr. Drew was for these things too, they say, that the six French-Canadian ridings of Ontario voted for him.

Now, of course, Mr. Drew no longer has any responsibility for Ontario educational policy. Rut French Canadians appear to be holding him to account for the concessions they expected from him as Premier of Ontario.

The matter came to a head in Ottawa last month when a delegation from the French-Canadian Educational Society called on Georges Heon and Renaud Chapdelaine, the two French-speaking M.P.’s in the Progressive Conservative group.

As Heon told the story later, the

delegates asked, “Do you support our cause?”

“How far would you go in supporting it?”

“To this point,” said Heon, “that we could not and would not support any political party that would not treat Franco-Ontarians with fair, ess and justice.”

No reporters were present at the interview but one of the delegates was the editor of a French-Canadian paper. According to a front-page story in his newspaper next day, Heon and Chapdelaine “formally engaged themselves to obtain justice for the French Canadians and Catholics of Ontario in the settlement of the school question; if they fail, they are resolved to withdraw their support from Mr. Drew and the party of the official opposition.”

Whether or not the two M.P.’s went quite that far, the incident has put the PC party on a hot spot.

Four years ago the Drew government named a royal commission, headed by Mr. Justice Hope, to study and recommend policy on the whole educational field. As tlais is written the Hope Commission has not yet reported.

However, there is a rumor very widely believed among French Canadians that the Hope report will be unfavorable to them. They understand it will recommend a drastic restriction on separate-school education—limitation of the Catholic schools to the six grades, with junior high schools aixd

high schools common to all religious faiths. Even the hint of such action has stirred up loud opposition in French Canada.

Three days after the delegation visited Heon and Chapdelaine, the powerful UAction Catholique discussed the matter in a front-page editorial signed by its editor-in-chief, Louis Philippe Roy.

“Mr. Drew and his supporters should know that the Quebec electorate will not remain indifferent to the attitude they take in this matter,” said 1.’Action Catholique.

“The ex-Premier of Ontario promised to settle this question according to right and justice. If the same sentiments animate the Progressive Conservative leader, he can certainly influence his successor and prevent the consummation of the injustice that threatens the French Canadians of Ontario.”

All this fills the Liberals with glee. In Ontario any concession to Catholic and bilingual schools is bad politics in the Protestant ridings. Evidently a refusal of such concession is even worse politics in Quebec. Mr. Drew is cultivating Quebec rather assiduously, but Mr. Drew is no longer Premier and Minister of Education in Ontario. Even if he wants to, can he still deliver the goods?

The fuss over the two French-speaking Conservative M.P.’s had one pleasant result. It sent reporters to interview Renaud Chapdelaine, the newcomer from Nicolet-Yamaska, who turns out to be a very likable fellow.

Chapdelaine is a lawyer who got there the hard way. His father died when he was four, leaving his mother to bring up Renaud and two younger

brothers. She managed to send all three boys to the collège classique, the private secondary school that’s the only road to university for a French Canadian in Quebec. Renaud graduated, and then went to work as a taxi and bus driver until he had put his two brothers through university. Only after they were out and practicing— one as a doctor, the other as a lawyer— did he start his own law course.

He practices in Nicolet; Grits and Tories agree that he is well-liked there. His colleagues in the PC parliamentary group treat him as their white-haired boy.

Chapdelaine speaks almost no English. “You must have a lonely time,” a reporter remarked, “among all those Ontario Conservatives.”

“Not at all,” said Mr. Chapdelaine. “I would say at least 50% of our members speak a little French—they understand the gist of what is said.”

That was a loyal overstatement. Among the PC members John Hackett, who sits for Stanstead in Quebec’s Eastern Townships, can make a speech in French without notes. Don Fleming and Davie Fulton have both worked hard at their French and speak with a good accent, but tend to look blank when conversation gets at all lively. George Drew is taking French lessons, but so far has ventured only one sentence in the House of Commons. If any other PC member can say more than “Bong joor, monsoor,” he’s been hiding his light under a bushel. However, they say they loosen up in their hours of relaxation.

“We get along fine on social occasions,” one of them explained. “After a couple of drinks our boys can speak more French, and Chapdelaine can speak more English, than they thought they could.” ★ 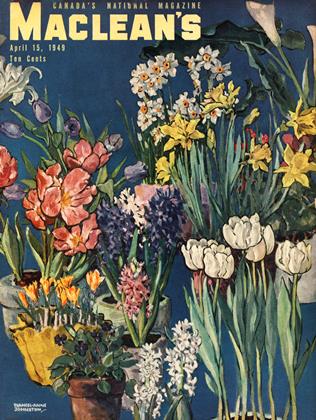