BACKSTAGE AT OTTAWA THE MAN WITH A NOTEBOOK May 1 1949

IT MIGHT be interesting to record precisely what takes place in Parliament on days when the headlines say “Drew, St. Laurent Clash.”

These famous “fights” usually start at three o’clock or shortly after, before the Orders of the Day are called. One or the other of the party leaders may make a statement, or ask a politically pointed question, that starts the row.

When Mr. St. Laurent, for example, says something the Opposition doesn’t like, they begin to shout. Some of the shouts may be intelligible to the galleries; most are not. You just hear a solid wall of noise.

Mr. Speaker stands up, and a lip reader could observe that he is calling “order” at the top of his voice. The din subsides to a clatter; Mr. Drew gets up and begins a spirited reply, at which the Liberals bellow. Chaos again. It goes on intermittently until both men have said what they want to say, or until both give up trying. Then the House proceeds as if nothing had happened.

Hansard conveys no notion of all this. The periods of shouting and yelling, which sound like nothing so much as a crowd of indignant schoolgirls, are recorded in Hansard as follows:

DOUG ABBOTT’S new budget has done wonders for Liberal morale and damaged that of other parties. One CCF member put his reaction into one sentence:

About the time the budget came down the Finance Department borrowed a couple of economists to work on the 1949 white paper on the economic situation. After looking over the figures one of them said: “You Liberals are luckier than you deserve. You’d have had to cut taxes anyway in an election year. But it just happens that the economic outlook justifies the very thing you’ve had to do.”

Ten minutes after Mr. Abbott sat down on budget night, J. M. Macdonnell, the Progressive Conservative financial critic, gave his party’s instinctive reaction in a couple of impromptu paragraphs. First he called it a “bribery budget.” Then, minutes later, he said the tax cuts didn’t go far enough—exemptions should have been raised even higher.

Two months ago Liberal backbenchers thought an October campaign would be all too soon. Now, most of them would like an election in June.

THERE’S an element of death wish on both sides of the House about the 1949 election. Some men among both Liberals and Progressive Conservatives feel that defeat this year would serve their party’s long-term interest better than victory.

There’s no such reservation among the leaders of either party—both are all out to win. Backbenchers, however, remember 1930. A Conservative Government came into power with the onset of depression, and was defeated just as the economic curve hit bottom and began to climb again.

“I pray every morning,” said one Progressive Conservative, “that Continued on page 83

the Liberals will squeak back in. depending on the CCF for a majority. Fd give such a Government two years to live. Any kind of economic difficulty — unemployment, loss of markets—and they’d be defeated in the House and then beaten in the country. We’d come into office for a good long time.

Some Liberals take precisely the same view—but with an important reservation.

“We ought to be hoping to lose,” said one of their senior men. “It’s a good time to be leaving office. But J have a sentimental reason for wanting to win—I’d hate to see St. Laurent beaten.

“That man has won the affection of this party more than any leader I ever knew. We don’t want him to fail. We’ll win for him if we possibly can.” Another Liberal member put the same idea in more practical terms: “From my own selfish point of view, I’d rather be re-elected personally and have the Government defeated. But the party can’t afford it.

“St. Laurent’s our best man, by head and shoulders; if he goes down the party’s decapitated. And at his age he’s got to win this year or not at all.

“The Tories are in a different position. They’ve got a new leader, young enough to last them 15 years, and they can well afford to lose—might be better off if they did lose. We can’t.

“I can see plenty of reasons why we can’t afford to win, either. The next term is going to be a tough one for whoever’s in power. But we’ve really got no choice.”

Progressive Conservatives think they may have done a considerable service to national unity in a recent organizing trip to the new province of Newfoundland.

In the weeks before union visitors to St. John’s were astonished at the depth and intensity of bitterness among anti-Confederate Newfoundlanders. One man, standing in the lobby of the hotel there, was telling a friend of having seen a couple of British warships on manoeuvres—“made you feel proud to be a British subject,” he said. No sooner had he uttered those words than a perfectly strange woman stepped up and slapped him across the face.

“How can you dare to stand here, in Newfoundland, and say yoncre proud to be a British subject,” she said hysterically. “After the way the British have betrayed us!”

In this highly charged atmosphere of resentment a new political party was just beginning to breathe. It was to be called the United Newfoundland Party; its platform, somewhat vague and undefined, would have boiled down to anti-Canadianism and the slogan, “It. shouldn’t have happened to us.” Whether such a party would even have tried for actual repeal of the Terms of Union is doubtful. But at best it would

have served to keep alive the kind of separatism that infected Nova Scotia for 50 years after Confederation, and which in Quebec is still fighting the battle of the Plains of Abraham.

Bell and Maedonnell argued strongly against the idea of a separatist political group. For one thing, they pointed out. it. was doomed to electoral defeat — the referendum figures proved that. If the issue were still to be Confederation and nothing else, the Confederationists (who would be Liberals, more or less by default) would take at least five of the island’s seven seats. Anyway, an anti-Confederation party would be condemned to futility by its very nature-dedicated to fruitless repining over an irrevocable fact.

It’s too soon to be sure that they succeeded completely in diverting the anti-Canadian sentiment into a Canadian channel. For the moment, however, the plans for a United Newfoundland Party appear to be in abeyance, and the organization of a Progressive Conservative Party in Newfoundland is in full swing.

When union with Newfoundland became a certainty last fall a number of sharp Canadians saw a chance to get extra quantities of American goods which are either on quota or prohibited altogether in Canada—automobiles, refrigerators, textiles, etc. It’s said that some warehouses in St. John’s are bulging with this kind of thing, bought during the course of the winter to be delivered to the Canadian mainland after union.

However, an article in the Newfoundland Act was put in expressly to stymie these canny gentlemen. It provides that no article which is prohibited or on quota for import from the United States shall he moved from Newfoundland to Canada until 12 months after union.

Some doubts have been expressed about the constitutionality of this prohibition. Section 121 of the B.N.A. Act provides that all articles of t he growth, produce or manufacture of any one of the provinces shall he admitted free into each of the other provinces.

Government spokesmen claim there’s no constitutional difficulty. For one thing, American refrigerators and automobiles are not “articles of the growth, produce or manufacture” of Newfoundland. For another, the Act says only that such articles shall he admitted “free”—i.e., free of duty. It doesn’t mean (according to a Privy Council decision) that such articles must be admitted “freely.” Any province can, if it likes, exclude goods from outside; it can’t charge a tariff on them. ★ 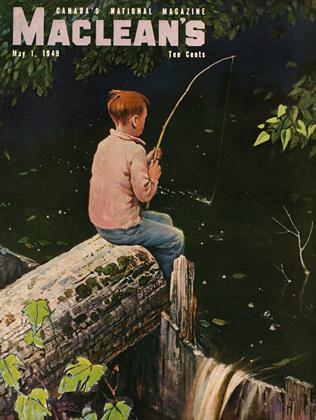