SOME M.P.'s set out on the election campaign brimming with confidence. Quebec Liberals were particularly cocky—one bet a Progressive Conserva-

Live $50 that. the Tories wouldn't take more than five seats among Quebec's 73. Another offered to bet they wouldn't take more than 10. Others set off with a strong hunch that the people hadn't yet made up their minds, that all current estimates are worthless and that the result would be determined by the campaign. If they're right the election will be to an almost unpre cedented degree a contest between two men, Louis St. Laurent and George Drew. If the "little campaign" of the Easter recess is anything to judge by they offer the Canadian voter a neat study in contrast. Reporters who traveled west with Prime Minister St.. Laurent said he was superb at the smaller meetings, especially the non-political meetings. At many a luncheon he sat. wit.h M.P.'s of all parties at the he;ul t.a ble and he usually t.ook care t.o make some graceful and friendly reference to the Opposi tion niembers present. In all close-range contacts he left a warm, friendly impression. "The P.M. will be a natural on television," one reporter said. At the big political mass meetings he was less effective, they thought. Audiences of more than 1,000 people seemed to be left relatively cold. People too far away to see Mr. St. Laurent's small gestures and facial expressions showed little enthusiasm. Mr. Drew. on the other hand, is at his best on a spotlighted platform with a big crowd before him. His voice tills a large hall without effort; his big

frame and clear features seem to project themselves right to the back row. Drew audiences, no matter how large, get a sense of personal impact.

I covered him at one meeting in the Maritimes, shortly after Easter, and on the whole the meeting was a decided success. He had a good crowd—“I didn’t know there were this many Tories in the whole of Nova Scotia,” one local observer remarked. He held their attention for nearly an hour, and was often interrupted by applause. It was in the smaller more personal ways that he slipped a bit. He got the local candidate’s name wrong, to begin with. More noticeably he kept mispronouncing the name of the riding he was speaking in. (Cape Bretoners call their native island C’Britton; Mr. Drew called it Cape Breeton.) Such things are trivial, but in politics they sometimes turn out to be important. One Liberal M.P. summed it up thus: “Drew would be wise to stick mainly to the cities and the big crowds. St. Laurent ought to avoid the cities as much as he can, but do plenty of talking in the small towns and villages.” Aside from personalities each party leader has a few intangibles on his side. Mr. Drew’s slam-bang tactics win friends, but they also make enemies. Not only the Liberals, but even more the CCF, have been stung to a violent hostility. There will, of course, be no formal co-operation between the Liberal Party and the CCF, but the opinion is widespread here that in ridings where the CCF has no chance to win, many a vote that might otherwise go CCF will go Liberal just to make sure of beating the Drew man. On the Progressive Continued on page 58

Conservative side the great intangible is the public’s sheer weariness of the Liberal Government. Even some of the Liberals’ own backbenchers sometimes feel that they’ve been in power long enough.

Up to now this feeling has been frustrated by the lack of a real alternative. This year the alternative is there.

Food and Drug Act Regulations have lately been revised by the Health and Welfare Department. One new rule decreed that any product bearing the name of a constituent material must be made predominantly of that material. Corn syrup would have to be mainly from corn, and so on.

“Rye” whisky is made of several grains—not for 85 years has it been chiefly rye. Canadian distilleries of “rye” would have had either to go back to the formula of 1865 or advertise their product as “corn whisky.”

One of the largest distilleries in Canada is located in Health Minister Paul Martin’s riding. The new regulation was amended with exemplary speed.

Rye whisky made of corn is still rye.

Some western M.P.’s of the older parties are worried about the provincial election in British Columbia, which comes just before the federal. They don’t think the CCF will actually defeat the Liberal-Conservative coalition government of B.C., but they do think the coalition has worked itself j into a needlessly weak and perilous I position.

In practice this has meant the renomination of sitting members in coalition seats, and of colorless compromise candidates in the other seats. Grits and Tories are suspicious of each other; neither will support a really aggressive candidate of the other party. So they play safe by sticking to the men they have—and these men are getting I old.

Of the 18 Liberals in the present coalition all but two are over 50 and all but four over 60. Among the 15 Progressive Conservatives only one is less than 50, and he is not running again. On the other hand half the CCF’s 12 members are 50 years old or less.

This political cold-storage system is doing grave damage to the older provincial parties, according to apprehensive M.P.’s. Aggressive and ambitious young men are discouraged, frustrated, frozen out of provincial politics— except in the CCF. The young and vigorous in the anti-Socialist camp either concentrate on federal politics or drop out altogether.

The need for more judges in Montreal has been serious for several years and is now urgent. Some 5,000 cases are in arrears at the present moment, and the total is mounting every month as more new cases come in than the courts can handle. The average plaintiff can’t, get a new case heard for two years from the date at which it’s first set down for trial. Representations have been made by the Superior Court in the strongest terms, to Quebec and to Ottawa, but so far no new judges have been named.

Under the British North America Act it’s Ottawa’s duty to appoint the judges, but Quebec’s duty to create the vacancies—i.e., amend the Judicature Act to provide new judgeships. Normally Quebec would pass such an act, then request Ottawa to make the appointments.

In Quebec the Duplessis Government has—after much delay—finally passed the necessary act, but has still not proclaimed it. In an effort to expedite matters Ottawa has now passed an act for the appointment of judges to positions not yet created; the next step will be to try to persuade Premier Duplessis to proclaim his own act so that the Montreal court can be enlarged and the arrears cleaned up.

No one but Mr. Duplessis knows why the Quebec act has not been proclaimed. Cynical Grits around Ottawa believe, however, that he is stalling until after the election. If a Progressive Conservative Government should take power Mr. Duplessis may think he might have something to say about who got the appointments. ★ 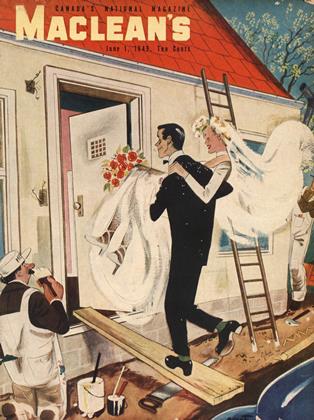