Wilfrid Laurier (Prime Minister 1896-1911) was king of the political baby kissers, according to ex-P.M. Mackenzie King.

Mr. King tells this story of how Sir Wilfrid clinched the title during a great swing through the West.

Sir Wilfrid planned his itinerary so that he might be seen by as many Westerners as possible. Whenever he appeared, whether on the observation platform of his private car, or in some big meeting hall, the local Liberal candidate had a flower girl in readiness — usually his own daughter. The girls, two to six years, walked prettily up to Sir Wilfrid and handed him huge bouquets of flowers. The Prime Minister rewarded each with a fond paternal kiss and the crowd thundered its appreciation.

At Moose Jaw, Sask., the candidate’s daughter was again cast in the role of flower girl. But

this time things were different. The daughter was 18, and stunningly beautiful. She minced down the aisle, mounted the platform and graciously presented the biggest bouquet of the trip.

Sir Wilfrid didn’t hesitate. Big bouquet and all, his arms went around the flower girl, and he kissed her resoundingly on the lips.

The crowd roared and a strident voice made itself heard above the applause: “I’m going to tell your wife!”

Sir Wilfrid waited for the tumult to die down. “Ladies and gentlemen,” he said. “When I started this trip I promised my wife I would kiss only babies and flower girls up to the age of eight. If one among you wants to tell my wife about this, let him. I can assure her I have kept my promise. You know as well as I do, they grow ’em big out West!”—Royd Beamish. 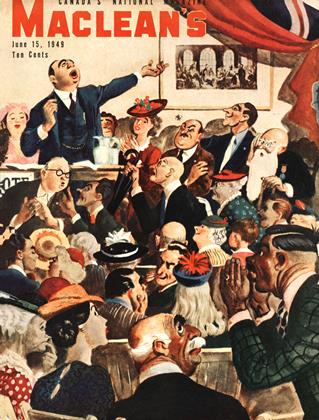