BACKSTAGE AT OTTAWA THE MAN WITH A NOTEBOOK July 15 1949

These Experts Picked the Liberals

CONSIDERING how wrong we all were about Dewey last year it may be interesting to record what Canadian parliamentary reporters expected on t he 27th of last month. Here’s the result of a highly unscientific pollthe 20 members of the parliamentary press gallery who were at. their desks one morning shortly before the election:

Highest score for the Prog. Cons in this advance poll was 90 seats, and lowest 50. One man gave the CCF 55 seats and the promotion to official opposition; one man cut them down to 20. Most of us rated them a little above the 32 they had before the election. Social Credit was generally allowed its present strength in Alberta, though some reporters thought they’d lose a few seats and one gave them a gain of one.

Political leanings of their papers didn’t seem to sway the reporters’ judgment much. Some of the higher guesses for the Liberals came from the correspondents of devoutly Conservative journals, while the two high marks for the PC’s came from completely independent sources.

Most of the estimates were rough guesses. One or two were the result of really serious study by men who had been across the country with one or both party leaders. One man studied the country riding by riding and gave the Liberals their highest score of the poll, 155 seats.

THIS was probably the first political campaign in history in which the paid advertising of one party was picked up and reproduced in full, free of charge, by the other party.

Progressive Conservative advertisements in Quebec were rather strongly nationalist (Duplessis brand) in their tone. One quarter-page ad proclaimed “Stephen” St. Laurent a bad Catholic because he once walked out of the House instead of staying to vote “with Mr. Drew” against divorce; a bad French Canadian because he said French language rights could be abolished by simple vote of the Commons; a bad Canadian because he approved of “colonialism” and of immigration, and because he “fought the choice of an essentially Canadian flag.”

By way of illustration the ad carried a picture of Premier Duplessis’ fleur-de-lis flag of Quebec.

This advertisement coincided very closely, even in its phrasing, with a campaign speech by Paul Bouchard. Bouchard was the Nationalist candidate who ran against Mr. St. Laurent in 1942. His speeches then were so violently anti-war as to skirt the edge of sedition. After the campaign, Bouchard thought it wise to spend some time in Mexico. This year Bouchard ran as an “Independent” but the Liberals were quick to infer, from the resemblance between his speech and the Conservative advertising, that he was working pretty closely with Mr. Drew’s party.

Liberal newspapers in other provinces accordingly picked up photostats of the Progressive Conservative ad and ran them on their editorial pages, with translations appended.

Progressive Conservatives, on their side, appear to have missed a bet when they failed to make a national issue out of a pre-election incident in Windsor, Ont.

Central Mortgage and Housing Corp. had made an agreement with Windsor to increase the payments in lieu of taxes on 2,500 wartime houses there, collecting the extra money by a slight increase in rent. The new rentals were to go into effect in June. Tenants were vociferously indignant about it.

Exactly the same arrangement was made in Welland, Ont., and there, too, the tenants held protest meetings. Hon. Humphrey Mitchell, Minister of Labor and M.P. for Welland, came down to one of these meetings. He told the tenants they were getting a lower rent than anyone else in town, that if the city needed more, tax money it was entitled to get it, and that he had no intention of making any representations whatever at Ottawa to have the rent increase stopped.

Windsor tenants had better luck. Their M.P. is Hon. Paul Martin, Minister of National Health and Welfare. At their protest meeting they heard a letter from Mr. Martin assuring them that “Mr. Winters (the Minister responsible for housing), after a conversation I had with him, has ordered all matters of rent increases to be halted. A thorough repair job is being undertaken. When all this is done, and not before, consideration will be given to the financial matter.”

Meanwhile, Ottawa’s contract with Windsor is binding. The city is getting an extra $50,000 a year from Central Mortgage, even though Central Mortgage is not collecting it. Ottawa has similar tax-increase agreemer ts with many other municipalities; the same treatment to all, across the board, would run into several millions in extra subsidies for the Government ’s teman ts.

In the Windsor Star, usually friendly to Mr. Martin, a senior columnist said: “One hesitates to use the word ‘bribery’

. . . But what else is Ottawa’s latest manoeuvre in regard to Windsor’s veterans’ housing problem?”

Canadian foreign trade in general and trade with Britain in particular, is causing more worry in Ottawa than the campaign speeches may have led you to believe. Neither party was telling the whole truth about the trade outlook, and both knew it.

Grits knew as well as Tories that in spite of the high trade figures of the past few years, and in spite of their continuance to the present moment, there’s trouble ahead. Tories knew as well as Grits that the trouble can’t be averted by any such simple formula as “convertibility”—which Britain had already tried two years ago and had to abandon in a hurry.

Both parties know that Canada’s market in Britain is shrinking and will continue to shrink as Britain tries to balance her dollar accounts by reducing dollar purchases. Both parties know that the only way to reverse or check that trend is to increase the sale of British goods in Canada. The recent visit of Harold Wilson, President of the Board of Trade in the British Cabinet, underlined the diffi| culties and obstacles in the way of tha t j solution.

Mr. Wilson went home convinced j that there is no immediate hope of any large increase in sales of British consumer goods in Canada. He could see how British manufacturers could mend ¡ their ways—their packaging and styl-

in have not been adapted to Canadian preferences their deliveries have often been so late as to be no use at all, their advertising and merchandizing here have been left in many casts to incompetent agents. Mr. Wilson intends to give the manufacturers a frank and thorough scolding for all these things, and he hopes for improvements that will give Britain a better chance at the Canadian market in the long run.

But for the short run price competition in mass-produced goods is just too severe, and he expects no great change in the volume of business. Indeed Britain will have to make most of the aforementioned changes in order to hold the market she’s got.

A more encouraging prospect appeared for the sale of heavy machinery in Canada. Britain at the moment has only about one per cent of the Canadian market in this field, yet Mr. Wilson found that British firms could meet the current prices. He thought there was good hope of multiplying that one per cent many times.

Canadian officials, though warmly sympathetic, are not quite so optimistic. They see two obstacles in the path of British heavy machinery here.

One is the lack of a technical service staff. Canadians are wary of buying machines for which it’s difficult to get spare parts, and impossible to get the kind of maintenance service which North American manufacturers provide. Before Britain could compete on equal terms in the Canadian market she’d have to do more than meet North American prices—she’d also have to establish a technical staff and a chain of supply bases for spare parts right across the country. This is a big job.

The other difficulty facing British exporters is the fact that Canada’s industrial investment boom has been going on for four years at the highest level in history. It will probably continue through the present year, it may even last through 1950 (though economists doubt it). But sooner or later the investment boom will end. Britain has already missed a huge proportion of this Canadian business. It’s doubtful whether she could get into the market soon enough now to get much of a share of it.

The next development in Canadian immigration policy is likely to be a further refinement of the selective principle. The idea is to bring in workers not by the hundreds or thousands for particular industries, but individual skilled artisans to meet the individual needs of particular communities.

The plan is still young, hasn’t yet gone into full operation. However experimental work is being carried out along these lines:

An immigration department settlement service would make a close survey of a given region—perhaps a whole province, perhaps just a handful of towns. They would gather this kind of information: Jonesville, population 1,000, needs a bakery, a blacksmith, a shoemaker, a doctor and a dentist. Smithville, population 1,300, needs a small cannery.

Already enough work has been done to reveal a surprising number of these shortages of skills and enterprises in smaller communities. Once the machinery is set up here. Canada already has facilities in Europe to fill such “retail” orders for human «kill. if 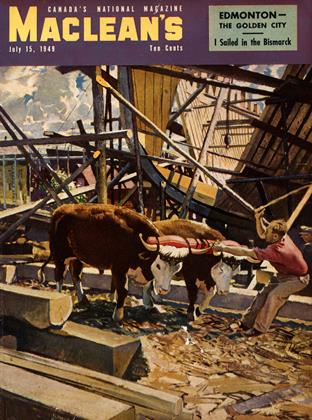