BACKSTAGE AT OTTAWA THE MAN WITH A NOTEBOOK August 1 1949

IN QUEBEC CITY, just before the election, a leading Liberal said:

“Frankly, I think we’re going to lose a dozen to 15 seats. But I don’t regret it, because it means the ruin of Duplessis and his Union Nationale. Their whole stock in trade has been isolation, freedom from any tie with Ottawa. Now they’re in a federal fight up to their ears, and in the long run it’ll smash them.”

He was wrong about the 15 Liberal losses, but that makes it all the likelier that he may prove to be right, about the Union Nationale’s future. The election was a personal defeat for Premier Maurice Duplessis, no less than for his Ontario ex-partner, George Drew.

Mr. Duplessis did not appear on Progressive Conservative platforms during the campaign, but that was all he omitted. Of his 20 cabinet ministers 19 were openly in the battle at Mr. Drew’s side. His Labor Minister, Hon. Antonio Barrette, told the Drew meeting at Joliette:

“In the provincial election last year I spent only four days in the riding working for my own seat. I have been working four weeks to win for Edouard Hetu” (the PC candidate, who was beaten by 3,000 votes).

Even Premier Duplessis himself dropped the occasional word in season. Mr. Drew called on him at the Quebec Legislative Buildings. As they posed in a handshake behind Mr. Duplessis’ desk a photographer said, “Would you mind coming forward a little?”

“Ah,” said Premier Duplessis, with a broad grin. “So you want us to come to power?”

In at least 30 of Quebec’s 73 ridings the Union Nationale machine was rolling with the power and subtlety of a 70-ton tank. At Joliette, Mr. Barrette’s home town, George Drew was met by a gaily decorated airplane and a parade of sound trucks. Three Rivers and Quebec greeted him with brass bands, as did half a dozen villages along his route. Cheering crowds turned out everywhere—the Drew meeting in Quebec City was much bigger than the S. Laurent meeting a few weeks before.

ALL THIS was only the visible fraction of the CM. Union Nationale’s effort; its more important functions were out of sight. As one professional Conservative remarked: “We have two great

advantages down here, the party machine and the provincial police.”

Police support can be invaluable on a Quebec election day. In many ridings both parties habitually do things the Election Act forbids—the dead arise to cast their votes, the absent are present. Impersonation of electors, commonly known as “telegraphing” votes, is practiced on a considerable scale.

When one party has the police on its side an odd coincidence usually develops. Of the ward heelers arrested for “telegraphing” and other misdemeanors the vast majority turn out to be workers for the opposite party.

In spite of the secret ballot, too, a good party organization has ways of buying votes. In a close poll half a dozen votes can tip the scale; judicious spending may bring one party or another the handful of votes in each polling subdivision that add up to a majority.

“In my riding,” a Liberal organizer said, “the father of a grown-up family who controls maybe five or six votes can get up to $400 from the Union Nationale.

“To be honest,” he added, “I must admit that we are doing the same thing. But we haven’t got as much money; we can’t compete.”

Why not? Didn’t the Liberals have plenty of cash?

“Our treasurer is C. D. Flowe,” said the Liberal worker gloomily. “It costs him maybe $3,000 to get elected in Port Arthur. He cannot understand why my candidate needs $15,000 or more.

Liberals w'ere frankly scared by the Union Nationale’s show of strength. They didn’t need the Gallup Poll to tell them that Prime Minister St. Laurent, personally, had the support of a vast majority in Quebec. But they knew, none better, what a party machine can do in a close fight, and they expected close fights in a number of individual ridings.

There was, for example, the rural constituency where the Liberal candidate had lately set up housekeeping with the wife of a leading Conservative organizer. That did him no good among his devout Roman Catholic electors, especially as the whole affair had been dragged through the divorce committee of the Senate. Divorce proceedings are supposed to be secret, but the Union Nationale had got hold of a transcript of the evidence and its juicier bits were read from political platforms. (The Liberal won anyway, as it turned out.)

There were ridings where the Progressive Conservative had such a strong personal following that he looked invulnerable. Georges Heon, chief of the PC forces in all Quebec, and Frederic Dorion, his lieutenant in the Quebec City district (they both lost), were both regarded as sure victors. So was the “Independent” Camillien Houde, who did win Montreal-Papineau by a margin of 85 votes. So were a dozen others whose names mean nothing to the outsider, but who are potent locally.

In other ridings Liberal strength was skilfully split by the entry of strong Independent Liberal candidates. One of these was Three Rivers, Premier Duplessis’ home town, where the PC’s scored one of their two Quebec victories. Another was Sherbrooke, where the mayor ran against the sitting Liberal.

Against all this, what won for the Liberals in Quebec? Here’s the explanation, given before the election, of a veteran FrenchCanadian nationalist:

“I don’t think our people would have voted for St. Laurent in any enormous number just because he himself was French Canadian. But when they discovered that he was popular in the rest of Canada, that he was actually gaining votes for the party among the English, then they really were impressed.

“Myself, I am astonished. I have been told St. Laurent is even gaining votes in Toronto, but that I cannot believe. Toronto Orangemen voting for a French-Canadian Catholic? No.” In Toronto and the Yorks where the Liberals used to have two seats they won eight under St. Laurent’s 1 e a d e r s h i p.

As a matter of fact the Liberals didn’t know their own strength in Toronto, to the intense disgust of their own optimists.

A week before the election a Toronto Liberal said: “The swing to St.

Laurent is going to win for us in other places, but here it’ll just elect the Tories again by weakening the CCF.

“Trouble is, the big boys in our party don’t want Liberal M.P.’s from Toronto. ’Fliis is where they get a lot of their money, and the Bay Street boys don’t want to have to go through a local member when they’re dealing with Ottawa. They’d rather go direct to Howe. So—look at the candidates we’ve got in this town. The Tories here may be a bunch of nincompoops, but we’ve outnineompooped them.”

This was a bitter overstatement, of course; there are several good men among the Toronto Liberal contingent. But there was some truth in what he said.

In one riding the Liberals had no candidate at all up to 15 minutes before their convention. Rather than default they picked a junior worker from another candidate’s organization. ’Flic astonished nominee had only one stipulation:

The answer was yes, so the nomination was accepted. The Conservative candidate was successful, but by a minority vote.

This department’s nomination for the most memorable quote of the entire campaign was delivered at a small Liberal women’s meeting in an Ontario town. The speaker, a weathered Grit from the next riding, was extolling the Liberals as a party of reform:

“I say in all reverence, ladies, that the greatest of all reformers, Who died on the Cross, was a Liberal. Why? Because He was a friend of publicans and sinners.” ★ 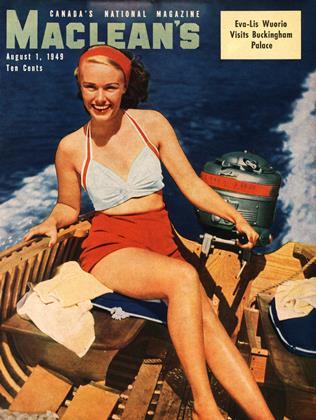