LIKE everyone else I have whooped joyously at pictures of bathing suits of the 90's and early 1900’s. Suddenly, as I lay on the sand and watched my fellow man splashing about, I wondered why.

Nothing I ever saw in an album compared with the size 42 in the bilious green bra-and-panties set who was coyly throwing sand at her escort, a few feet to my right.

The killing picture of Grandfather’s cousin Joe, in his kneeand elbowlength suit, had nothing on the terrified-looking little man hovering on the water’s edge in front of me. He had blown himself to some imitation leopard-skin trunks. By the look of him he had lived to regret it.

Remembering Aunt Millie’s honeymoon bathing pictures, which have been a riot for 25 years, I studied the lady a little to my left. She stood six feet in her wedgies, and weighed roughly 110. She was wearing frilled bloomers of red and white stripes and, an incredible distance above them, the inevitable bra. Tearing my gaze from a fascinated counting of her vertebrae I looked carefully around. Nobody was laughing. Somebody should have been. She looked 10 times as funny as Aunt Millie.

The reason for this lack of amusement was easy enough to understand. Of the hundred or so people on the beach possibly a dozen felt sure enough of their own appearance to

laugh at anybody else, and these fortunate souls were too widely scattered.

Regardless of what the resort folders say the beach is a place of disillusionment. There the poor little secrets, so carefully guarded all the rest of the year, are bared to a callous world. Not all these revelations are things like knock-knees and lordosis curves, either. Imagine the feelings of a girl who discovers, with no previous warning, that the man of her dreams is capable of appearing in white satin trunks with red hibiscus all over them! Johnny Weismuller has a lot to answer for.

Two young things stood openmouthed as a vision in yellow trunks with orchids on them sauntered past. “Boy, get a load of that!” said one of them, awed. “All he needs is a string of shells and a flower in his teeth.”

But for every magnificent sun god there are 10 men with the seats of their trunks drooping. For every bathing beauty there are a dozen women with their bra tops half filled.

That’s another thing. Why, unless they hate women, are bathing-suit manufacturers so foolhardily generous with their bra tops? Nobody wants to go around looking as though she is wearing semi-infiated balloons.

A further charming touch to the beach scene is the large wet sandy spot on the backs of beach robes.

Bathing suits are, and always have been, enemies of man. Consider the things that happen, even to people who have every reason to don a suit with confidence. Almost every woman has owned a suit whose straps have thought nothing of stretching four or five inches when wet. Almost every man knows somebody who dove out of a pair of trunks.

We’re Not All Models

The first rubber bathing suit I ever saw is still one of my outstanding memories. Its wearer was a statuesque blonde with a strong sense of showmanship. She posed nonchalantly until she had attracted all eyes, and then dove. When she surfaced her suit had a supercargo of at least a gallon of water, and the effect failed to fill any of us with a desire to rush out and get one like it.

And there is that gay deceiver, the ballerina suit. It is especially insidious, because it’s not the public but the wearer who is deceived. In the store it looks like the answer to the prayers of thousands of girls who have more to conceal than to reveal. Brought home a cautious modeling before a mirror fails to show any cause for concern. This holds good as long as it stays warm and dry with the sun bathers. When she wears it into the water the most gorgeous creature on the beach emerges looking like Monday’s wash.

The root of the trouble seems to be that the bathing-suit designer, with a dreamy disregard for life’s realities, makes all his suits for Powers model types. He’s on the wrong track. What he should be doing is picturing a Lena the Hyena and trying to make her presentable. I realize that this is another example of the hard right against the easy wrong, but the result would be of enormous benefit to the beach scene as a whole.

Grandma and Grandpa believed that the human figure should be sheltered from the public eye. Aesthetically speaking in the case of 83.6% of the bathing public, they were right.

Ix>ok at ti.e picture of Grandpa with bis bathing suit, handle-bar mustache, straw boater and cigar. In spite of these things,* or maybe even because of them, the old boy has a presence, a look of substantial dignity that is long gone in his counterpart today. Grandpa’s paunch is discreetly covered, though undeniably there, while today’s paunches hang over the tops of trunks in quivering vulnerability. Maybe it’s good for a man’s health to scorch a billowing tummy to the latest shade of Passionate Geranium, but it’s tough on the onlooker.

Incidentally, did you ever stop to think how few full-length mirrors there

This is a free, a democratic country. Everyone is permitted, even encouraged, to look as silly as he pleases, and I would be the last one to question his right to do so.

But I do think we should stop laughing at our forebears. It puts us on the spot. ★ 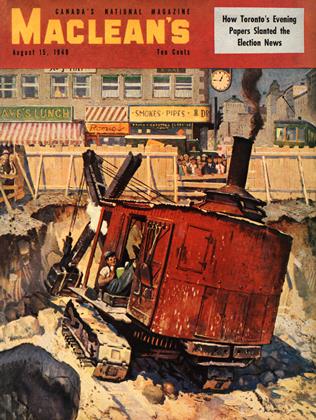