ANNIE GET YOUR GUN: A zestful screen version of Irving Berlin's wild-west musical. Betty Hutton, as the queen of the sharpshooters, goes after the audience tooth-and-claw, but her over-ebullience doesn't spoil the picture.

THE BLUE LAMP (British): An affectionate close-up of the gunless (but not gutless) London bobby, who confronts lawbreakers and begonia-raising with equal fortitude and humor. Enjoyable stuff.

THE FURIES: The lamented Walter

Huston’s formidable talents are wasted in a stereotyped role as a ripsnorting ranch dictator. Barbara Stanwyck, as his hellcat daughter, is similarly hogtied.

A LADY WITHOUT PASSPORT: Hedy Lamarr’s serene poker face implausibly represents a tormented wanderer from Vienna who joins other aliens being smuggled into the U. S. John Hodiak is the immigration sleuth who instantly adores her.

LOUISA: A coy, tiresome little do-

LOVE HAPPY: Except for a couple of robust scenes involving Harpo, this perfunctory comeback by the Marx Brothers

is a sorry counterfeit of the fine comic currency they were issuing 15 years ago.

MYSTERY STREET: Despite its prosaic title and an absence of big names in the cast, this is an honest and fascinating crime-detection drama. One of the best.

SHADOW ON THE WALL: As a little girl who goes balmy after watching her mother get murdered, Gigi Perreau gives a moving, graphic performance. Some of her elders are less persuasive.

STELLA: At its best, this screwball

Gloria Swanson as a silent-screen empress who destroys her “kept man" as well as herself in an effort to recover her vanished glory. A superb satiric tragedy, not for the kiddies.

Key to the City. Love-comedy. Fair.

Night and the City: Crime drama. Good. No Sad Songs For Me: Drama. Fair.

(Also called “A Ticket to Tomahawk.’’) 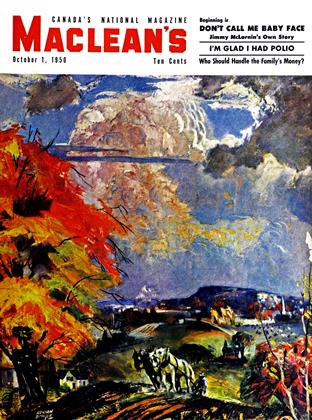