A LETTER FROM FRANCE

Click to View Article Pages
A LETTER FROM FRANCE

A LETTER FROM FRANCE

I AM writing this letter from a hotel in the pleasant seaside community of Le Touquet, France, where I am visiting for a few days— my first trip to France since the winter of 1939-40.

Before the war Le Touquet was a favorite resort of rich Britons. The hotels were luxurious, the play at the Casino high, the golf course excellent and, if you really wanted to see the sea, there was nothing to prevent it providing you were willing to journey one mile from the Casino

When France was occupied by the Germans, that pudgy voluptuary Hermann Goering took one of the villas here as his headquarters. As Le Touquet is only 20 miles from Boulogne he was ready to cross to England as soon as the German Army had landed on our coast and was sweeping toward London.

The war years followed each other until the situation was reversed. There came the great moment when the allied armies were ready to invade Europe. But where would they land? Hitler had one view; Goering had another; the only one who was right was Rommel but he was out of favor and no longer had the ear of the Führer. But there is a long deep beach at Paris Plage, next door to Le Touquet, and it could not be ruled out from the German calculations. Realizing this the Allied Air Force sent a bombing raid two or three days before the invasion.

Goering’s villa was demolished but, of course, he was back in Germany. The golf course was blasted in many places, some of the luxury hotels were destroyed, and as always a

number of little houses with their innocent inhabitants were blasted into eternity. But the bombardment kept a considerable body of Germans concentrated here for defense while the invasion thrust was made far away in Normandy.

The last time I was over here the Royal Air Force had asked me to visit units and talk to them, presumably to take their minds off the phony war. On that occasion, accompanied by my old Canadian friend of World War I, Major T. W. MacDowell, V.C., I went to Verdun and saw the endless snow-covered slopes with thousands upon thoussands of little French crosses with their simple inscription: “Mort sur le Champ d’Honneur.” In that immortal defense the French suffered nearly a million casualties as day after day, week after week, their troops moved into the trenches with the cry of “Aux armes les morts!” The slaughter was so terrible that living men literally fought beside dead. That cry of “To arms the dead!” was not Qerely the Gallic sense of the dramatic; it expressed the pride and glory of a nation which had conquered the land of the mind but had been bled almost to death in wars of conquest and defense.

MacDowell and I paused on our way to Alsace-Lorraine to visit the Hall of Memories erected at the top of the Verdun slope. There was invisible lighting which gave a sunset glow to the interior and on the walls were the names of boys and men, sons, brothers, husbands, fiancés, who had fallen at Verdun. But with that delicacy

battalions had to march along the Verdun Road by those miles and miles of crosses. I am not pretending that either MacDowell or myself foresaw the swift collapse of France which was to take place a few months later but we asked ourselves what must have been the thoughts of the men as they marched on that road of death to the new war against the old enemy.

a thing oversimplification can be.

It is true that the French Army fought badly in 1940, but was it entirely France’s fault? Where were the British? Yes, we had half a dozen divisions there which fought heroically against preposterous odds. Where were the Americans? The United States were not at war. As in 1914 it was left to the French to take the massed onslaught of the forces of aggression.

The French politicians were as unequal to the crisis as were the French generals. But governments cannot be stronger than the people they govern

and the contemptible vacillations of Reynaud, Laval, Petain and Weygand showed that France could not face a third war against Germany in living memory. You who read these words in a land which has never known the terrible spiritual debasement of enemy occupation should try to understand the feelings of the French who were occupied by Bismarck’s Army in 1871, by the Kaiser’s Army in 1914, and in 1940 were facing their third invasion by Hitler’s Army and Gestapo in 1940.

We in Britain were protected by a tank trap called the English Channel. The rivers of France supplied no such defense to the invader. America and the outer British Empire were guarded by the vast oceans. France had nothing to protect her but the young white bodies of the sons of men who had died at Verdun.

The Two Faces of France

It does not need a vast imagination to understand what happens to a nation occupied by an enemy for four years. All that is best and all that is worst comes to the surface. Frenchmen in the resistance movement were tortured until death took mercy on them but they did not betray their comrades. Frenchmen came to terms with the conqueror and made more money than their avarice had ever dreamed of. Frenchmen who had spoken their minds without fear or had written plays and books in that Paris where freedom of thought was in the very air became ghosts who wandered piteously in the faubourgs and the boulevards. Frenchmen were sent as slaves to Germany; Frenchmen served drinks to their conquerors, waited on them at dinner or performed comedies for their amusement. Frenchmen escaped in boats to England where they could find honor and death in fighting the enemy.

It is easy enough for us who never experienced this to say how we would have behaved in similar circumstances. When it was suggested to Churchill in 1940 that if the invasion came he should leave for Canada with the Royal Navy and carry on the war from there he replied: “Under such circumstances I think some kind of a British government should go to Canada but I, and I hope my principal ministers, will face a firing squad and spill our blood on the soil we tried to save.”

But supposing the Germans had come and had put an end to organized resistance. Supposing they had formed a collaborationist government and had offered any one of us the post of minister of police. If a British politician accepted it and did his best to spare the British people the worst horrors of a cruel regime it would have earned him the contempt of his countrymen and a firing squad after the Germans lost the war. Pierre Laval’s daughter sent me a copy of her father’s diary which, truthfully or untruthfully, told how Laval saved thousands of Frenchmen by lying to the Germans under whom he administered Occupied France. But when the Germans left Paris Laval was arrested, tried, sentenced, took poison in prison but was dragged to the gallows just the same.

France today is a nation in search of its soul. The wits are at work again in the Paris theatre and there is brilliance in the air. The dress designers of Paris are once more decreeing the shape women must be and there is no serious rival to their dictatorship. The restaurants, the hotels, the shops and the night clubs are courting the U. S. dollar. The casinos have reopened and from Le Touquet to the Riviera one hears the cry of the croupier: “Rien ne va plus.” France is herself once more . . . on the surface. She may deceive 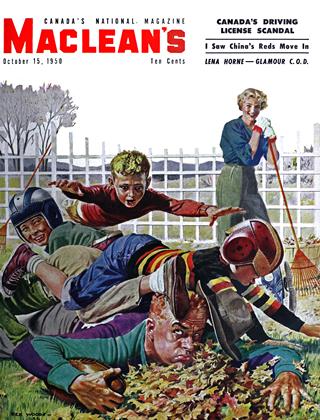