BEAVER VALLEY: Walt Disney's second wild-life short is just as delightful as its predecessor, "Seal Island." It's not a cartoon, but an expertly edited outdoor yarn about a solemn beaver, a greedy coyote, some screwball otters, and other beguiling characters.

THE BLACK ROSE: This elaborate

medieval melodrama must have cost an awful lot of money, but it’s mostly a dull picture just the same. The cast includes Tyrone Power, Orson Welles, and several hundred camels, the latter being thoroughly convincing.

FANCY PANTS: Bob Hope manages to be amusing quite a bit of the time while masquerading as a member of the British nobility in the Wild West. "The Paleface" was funnier, but this one is pretty good.

FATHER IS A BACHELOR: William Holden pleasantly sings a lot of old ballads and these are by far the best ingredients in this weak little fable about a roamer who adopts five orphans.

THE FIREBALL: Mickey Rooney, still playing a heel with a soul, becomes a roller-skate speed king and loses all his friends before the Rev. Pat O’Brien suddenly reforms him. Some of the rink shots, anyway, make it worthwhile trying to keep your eyes open.

THE LAWLESS: Occasional sluggishness and an all-too-casual romance fail to outweigh the many virtues of this stark, suspenseful drama about racial hatred and mob violence in a California

PANIC IN THE STREETS: An absorbing thriller about three fleeing killers who don't know that they are carrying the germs of the Black Death. Elia Kazan brilliantly directs a fine cast.

THEY WERE NOT DIVIDED (British): Most of the usual "Tommy" and "Yank" bromides are happily absent in this earnest story about British and American comrades-in-arms in Europe. There is, however, a superficial glibness in the way the theme is developed.

THE TITAN: Michelangelo's masterworks and the historical impact of the Italian Renaissance are excitingly examined in this outstanding documentary. It's one "art" movie that can be enjoyed and understood even by people who habitually shun the galleries.

Stevenson’s classic tale of pirates offers thrills for youngsters and nostalgic chuckles for their elders, although Robert Newton's unabashed hamming in the role of Long John Silver may provoke yawns from teen-aged sophis-

Abbot and Costello in Foreign Legion: Slapstick. Fair for children.

House by the River: Drama. Poor.

In a Lonely Place: Suspense. Fair. Intruder in the Dust: Drama. Good.

Where the Sidewalk Ends: Detective 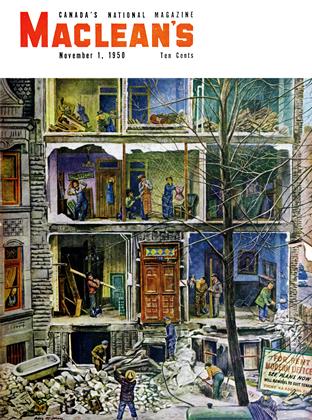