MAX FERGUSON is an alert, well-groomed, pleasantly toothy young radio announcer of 26 whom it is easy to picture as the secretary of a students’ council or president of a young men’s business association.

But because he is part of a nationally owned radio system, the CBC’s Ferguson has already been the subject of an impassioned speech in the House of Commons, a long poem by a prominent clergyman and a mailbag full of letters to the Press. As “Rawhide,” the corporation’s best-known corn merchant, he has, in the eyes of some fans at least, divided the nation again into Upper and Lower Canada.

The “Rawhide Show” is a zany half-hour program of recorded music formally known as “After-Breakfast Breakdown,” heard on the C'BC’H eastern net work, from Toronto right through to St. John’s, Newfoundland. On it anything can happen and usually does. A parade of British archaeologists, crackpots, ignoramuses, stuffed shirts, spiders, families of hillbillies and prominent public figures continually interrupt a kindly, cactus-voiced old character called Rawhide who ds-s his best to protect tin; audience from their songs, dialects, speeches, plays and horrible ideas.

one man—Ferguson—sitting in a 10by-7 booth in CBC’s Jarvis Street studios in Toronto, his only equipment a two-foot-high dummy door used for sound effects, a package of cigarettes, and a wild and refreshing sense of humor.

When Ferguson came to Toronto from Halifax to start his own show he found himself on an uncomfortable half hour following a program of morning devotions and replacing a venerable program of military music which had been stirring people into life with their tea and crumpets for eight years. It wasn’t long before things changed.

Among those who took a dim view of Ferguson’s horsing around on a government - sponsored station was Douglas G. Ross, then Progressive Conservative MP for Toronto—St. Paul’s, who asked the Minister of National Revenue if he was aware of “that program of meaningless ravings and tripe, couched in the poorest possible illiterate English known as ‘After-Breakfast Breakdown,’ which was an insult to the intelligence of the Canadian people.”

This was followed by a blast by the Rev. Stuart Ivison, of the First Baptist Church in Ottawa, who let fly at Ferguson through the Ottawa Journal. He accused the CBC of “sacrilege, blasphemy, evil, public avowal of irréligion and something that Godless Soviet Russia could hardly improve upon”; and cracked through with a bitterly satiric poem entitled “Good Friday On the CBC.”

The whole thing started a verbal Donnvbrook that could only have happened to the CBC. A letterwriting feud began in the Ottawa papers and Ferguson, who had been exceptionally popular in the Maritimes, received a heartening storm of letters from his Maritimes fans.

As a CBC staff announcer Ferguson is a modestly paid Jack-of-all-trades. He works regular shifts announcing anything from a four-word station break to a frenetic, agency-written commercial on how to get a whiter wash. Most of the time he is the calm impersonal sexless voice in your living room who says things like “The foregoing was transcribed.”

But, like most CBC staffers, Ferguson has learned to double in brass. As Rawhide he emerges in the listeners’ mind as a knob-knuckled, tobaccostained, toothless old goat in a battered hat.

He talks like an illiterate though he’s a graduate in languages from the University of Western Ontario in London, where he grew up. Two days a week on “After-Break fast Breakdown” he was forced to play cowboy music, which he can’t stand. This fall, however, he decided to dispense with it. People who liked the Rawhide patter couldn’t stand the cowboy music and the cowboy fans didn’t like the Rawhide skits.

When he first began as a disk jockey Ferguson ran his show from Halifax. Hank Snow, a Maritimer who has become a top cowboy balladeer, appeared on the show and asked Rawhide what he should sing. “Wal, I dunno,” Rawhide drawled. “It might he kind o’ nice if yuh gave us somethin’ like that well-known strain from hernia.”

One of Ferguson’s standard characters is an insufferable pedant named Marvin Mellowbell who is embarrassingly out of touch with the times and who regularly hursts in on Rawhide with ho|s-less ideas for improving the standards of radio. Reluctantly, but with kindly tolerance, Rawhide makes

way for Marvin’s buck-toothed enthusiasm and there follows a wide-open burlesque of some such well-known program as “Citizens’ Forum.” During this Marvin barks his shins on other Ferguson characters such as Stupid, a glib, loud-mouthed ignoramus who can’t stand Rawhide; Grandma, a sweet, bird-voiced woman who is always trying to get him to eat poison chocolates: and such well-known guests as Winston Churchill and Peter Lorre, the latter usually engaged in a sinister clash of wills with his pet spider Harold.

One morning when signing off Ferguson asked his audience to concentrate on making newsman DeB Holly fluff the news. (Announcers love to see one another get logged for errors by the master control room.) Holly says that being conscious of all those people concentrating on making him say the wrong thing was an experience he won’t forget, but he got through without a mistake.

Holly, who has the greatest respect for Ferguson’s talent, was for his part satisfied if he could get Ferguson on and off the air on time. Although Ferguson could pass for a brisk young businessman he often moves around in a world of his own and is capable of great confusion about practical things.

Underpaid at 25c a Week?

Usually with about a minute to go Ferguson is still browsing around, head bowed thoughtfully, moving with the long careful strides of someone balancing on a narrow plank, as if he has another couple of days. When he goes on the air after casually talking to a fan on the phone or telling stories to someone in the control room up till the last second, he carries anything interesting in the conversation over onto the program without any change in manner.

He ad-libs practically all his stuff, his closest approach to a script being notes which he scribbles on the backs of envelopes just before the broadcast and usually loses. He is always in search of ideas. He gets his laughs legitimately with a sharp, satirical sense of observation and a feeling for lively burlesque.

Occasionally Ferguson’s spontaneity gets a little too spontaneous for the comfort of GBC officials. He once told his audience the CBC was paying him only 25c a week. He is the only announcer who gives station breaks in the voice of one of Ills characters, using such outlandish English as “This is CBL Toronto, 50,000 devestatin’ watts of power carryin’ to the entire city limits.” He used to end his morning broadcast with, “The time is bustin’ on for nine.”

Ferguson acts out his parts, shifting around in his chair when he says, “Come right in here, Marvin ” He distorts his face, strikes poses, holds his cigarette between his thumb and forefinger when he’s being sinister, helps imaginary old ladies out of the studio, drops ashes around when he shoots his mouth off as Stupid. It’s all lively stuff to watch.

Born in Durham, England, of Irish parents, he s[s-nt most of his life in Dindon, Ont. At high school he mimicked his teachers. He intended to Isa teacher hut his brother and a university professor arguer! him into radio. After graduation in 1946 he went to station OFI’L in Dindon as an announcer and joined the CBC a few months later. He was soon sent to station CBH in Halifax

One of lus first jobs was to disk

jockey a 15-minute program of the hated cowboy music. So that he wouldn’t be utterly disgraced in the eyes of his friends he disguised his voice during the show. He called himself Rawhide and began to speak as if he were talking around a cud of tobacco.

“It was purely a defense measure,” he explains.

Ferguson soon began to liven up the program with spontaneous nonsense, some of which got him on the carpet. At that time the Halifax station was getting an American feed from CBS and a regulation signature was, “This is the Columbia Broadcasting System, where 90 million people meet each week.” One bleak morning as he looked at these brave words Ferguson looked thoughtfully through the glass at his operator, Claud Wigle, and when he gave his station break he said: “This is CBH, Halifax, and there’s just two of us here, Wiggy and me.”

The Rawhide program went over with a bang in Halifax, Ferguson began to average 2,000 fan letters a month, and two years later he was sent to Toronto and put on the network.

Many Ferguson fans are women and children, who estimate his age at anywhere from 75 to 100, partly because of his toothless speech and partly because of repeated cracks such as, “Let’s see, that was during the Boer War. I’d just started collecting mv old-age pension.” The women phone him to give him a piece of their minds when they think he’s been behaving in a manner unbecoming of an old man, send him chocolates, records, cider, proposals of marriage, and, on one occasion, a knitted athletic support.

Ferguson’s dead-pan mixture of fantasy and current events is confusing to new listeners. One time he did such a good impersonation of Winston Churchill that when he dropped back to his Rawhide voice one of his fans called CBC to say that. though she was a devoted follower of Rawhide’s, she thought, he was going a hit too far when he started hutting into the middle of a speech by such a prominent statesman.

Ferguson oddly combines the qualities of the professional showman, to whom every knock is a boost, and the intense and touchy novice who takes things to heart. Most professionals take crank letters in their stride Ferguson was called on the carpet for telling one woman to “drop dead" on

He lives with his pretty, soft-spoken wife Norma (“Ginger”) whom he married in April. 1949, and an infant son, Scott, in an old rooming district in midtown Toronto.

He met his wife during the apple blossom festival at Kentville, NS, and she still likes to tell of how, after Ferguson had fixed up date with her through Syd Kennedy, station manager of CBH in Halifax, she palmed him off as a practical joke on her sister I’at. The girls were Rawhide fans, but it was one thing to listen to the "old goat” and another to go out with him.

(linger saved the big joke till the last minute, telling I’at over the supper table the night of the date that she was stuck with Rawhide. The joke was on Ginger when sister I’at turned up with a young man who was about as far from what she’d pictured Raw hide to be as you can get. 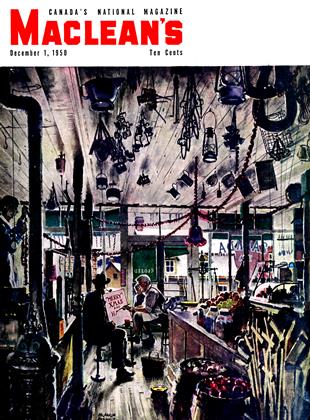