THE MOST hopeful thing you can say about Christmas, as of Christmas, 1950, is that it’s a miracle that hasn’t jelled. After one thousand nine hundred and fifty Christmases there is still no evidence to show that the weaker and baser parts of human nature are any less weak or base than they were before the first Christmas. It might be argued that the better parts of human nature are better, but the point cannot be proved.

What went wrong? Is it necessary to admit that—excluding the small change of roast turkey and purple ties—the currency of Christmas is too big for mortal hands to grasp? Is it necessary to admit that whatever it has to offer us in the celestial future, Christmas can improve our earthly present only by the measure of a few special acts oí generosity or a few rich hours staked out once a year on a calendar?

We are certain that Christmas, even within its earthly limitations, was meant to mean more than that. One of the first and unmistakably specific promises it held forth was good will and peace on earth. The prophet Isaiah, an excessively gloomy person in the main, foretold the first Christmas, long, long before it happened, and painted a vision of grandeur before which humanity trembled. “Your covenant with death shall be disannulled,” Isaiah promised, “and your agreement with hell shall not stand.”

With an offer like that before us—to be had for the taking, any Christmas and all Christmases and on all the days between Christmases -why do we keep turning our backs? You don’t have to be a prophet to sense that the offer is good and valid. You don’t have to be an accountant to know what side the bargain’s on. You don’t have to have a religion to know that Christ talked the soundest kind of common sense. If you only believe that two and two make four, you must also believe that the world would be a better and safer and happier place if its inhabitants could be persuaded to live by the Sermon on the Mount.

These are the “logical” and “practical” arguments in favor of Christianity. And it is precisely because we have put so much store in the “practical” and “logical” sides of the Christian ideal thac its practical and logical benefits have been so slender.

The logic which tells us that to practice Christianity is good also tells us that to practice Christianity is dangerous -unless you can get a guarantee that most of your neighbors are practicing it too. The logic which tells us there must be a God tells us not to put ourselves to too much inconvenience to follow His teachings, just in case it turns out that there isn’t a God after all. The logic that tells us to love and trust our fellow men also warns us to Watch our Overcoat.

Fencing an ideal as sublime as Christmas with logic is in itself illogical, as illogical as trying to play the “Adeste fidelis” on a toy drum.

We’ll never realize the promise of Christmas until we learn that when you try to make a thing work for two thousand years on logic and still haven’t got it working right, the logical thing to do is to try making it work on faith. 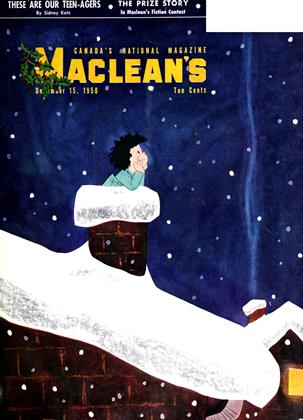