You won’t find Eddie Taylor’s name on any of these national products but he controls them all. This frank series tells the story of our most contioversial business promoter

And men from New York City who make other men look tame, But don’t neglect old Bytown, or call it slow and dead.

When it brings forth men like Edward, brilliant Edward, famous Ed.

THESE LINES, penned in the round handwriting of a contributor to the Delta Upsilon fraternity journal of 1921 at McGill, were intended to poke good-natured fun

student whose preoccupation with balance sheets and annual reports had gained him the nickname of “Overhead Taylor.” Today they look prophetic, not ironical, for Edward Plunkett Taylor has more than justified the high hopes of his fraternity brothers and gone onward and upward to become Canada’s best-known (though not necessarily best-loved) tycoon.

At 49 he is one of Canada’s controversial figures, condemned as a big-business octopus by left wingers, as a beer baron by dry hards, still suspect in many business circles as a flash-in-the-pan phenomenon, lauded in others as a builder of Canadian enterprise who took a chance and won.

To most Canadians he is an anonymity concealed some-

where in the dark labyrinth 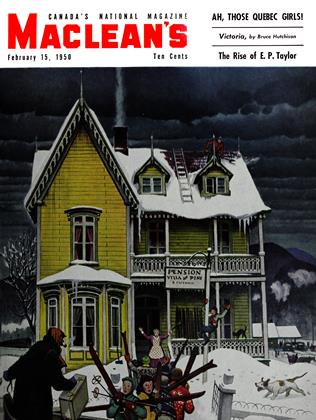