THE BITTER cold January day this obituary appeared in the classified columns of the Toronto Daily Star, the Cogswell family, John, his wife Margaret and their daughter Josephine, drove to the city’s outskirts to attend Mickey’s funeral at the Toronto Dog and Pet Cemetery.

There Mickey, a German police dog, was laid to rest among 430 other dogs and about 50 other pets, including cats, birds, rabbits and skunks.

Every detail of Mickey’s funeral was arranged and carried out by Arthur Willis, 46, a laconic man who owns and operates the three - and - a - half - acre cemetery. He buries about 125 dogs a year, which provides him with a modest living.

A bylaw which forbids burying dogs within the Toronto limits is a decided asset to Willis’ business. Torontonians with a dead dog on their hands may have a garbage collector pick it up. But many dog owners such as the Cogswells, wince at the thought of their pets ending up in the incinerator.

(There is also, in Toronto, the alternative of cremation for dogs. Dr. Alan Secord, of the Secord Animal Clinic, has a crematorium and will save the dog’s ashes and turn them over to the owner if he wishes.)

Mickey’s funeral—a typical one— was a simple affair, though the Cogswells had brought a large wreath of artificial flowers to place on the grave. For 12 years and eight months Mickey had been one of the family and the Cogswells were touched deeply by his death. Willis lowered the blue clothcovered coffin into the grave. As it struck bottom with a thud, Mrs. Cogswell and Josephine, dabbing their eyes with handkerchiefs, turned away. John Cogswell, a grizzled retired worker, said wistfully, “I can still see him coming in through the door.” Willis threw a shovelful of earth on the coffin and the funeral was at an end.

In the spring, when the snow cleared, a small cement headstone, identical but for one slight addition to those on the graves about him, was erected over Mickey’s resting place. Mounted on his headstone was a cement ball; in life Mickey had loved to chase after a ball. A simple epitaph was chosen: “Our great friend who will never be forgotten.”

Willis provided a complete service for $45. He picked Mickey up at the Cogswell home in his black panel delivery truck—sometimes known as “the hearse”— supplied the coffin (a homemade wooden box covered with blue cloth) and supplied and erected the headstone. He also guaranteed the upkeep of Mickey’s grave. In the spring and summer the whole cemetery is abloom with daffodils.

Had they wished, the Cogswells could have given Mickey a more, or less, expensive funeral. Willis quotes four different prices: $15, $35, $45 and $85. The price depends entirely on location chosen in the cemetery and it increases with the size of the headstone. But in each particular section the headstones are the same size.

And, had they felt so inclined, the Cogswells could have chosen a more pretentious epitaph. On headstones near Mickey’s grave are inscribed these last tributes:

“He had all man’s virtues without his vices.”

“Our gloriously happy days together will never be forgotten.”

And, in a more eloquent vein, this to Tibbers, a cat:

“Peaceful be thy rest, dear pet It is sweet to breathe thy name In life we loved you dearly In death we do the same.”

Willis is proud of the fact that there’s actually some honest-to-goodness Latin on one of his headstones. The words are Semper Fidelis (always faithful), a tribute to a couple of blue bloods. Baroness Ellsworth D’Argenteuie, a Labrador retriever commonly known as “Elly,” and Sir Maxwell Aitken of Laurie, a springer spaniel whom the boys called “Maxie.”

Willis will quickly draw the line against the word “baby” in an epitaph. A headstone dedicated to “Our lovely baby” has proved to be a big headache. People think that’s going too far and some have told Willis so.

When the fine spring weather came the Cogswells began to make frequent visits to Mickey’s grave. In this they were acting like most people do who have pets buried in Willis’ cemetery. Many bring flowers and a few even kneel and read passages from the Bible. Willis lookR the other way whenever this happens.

He has a hard-and-fast rule against even the slightest suggestion of religious rites during the burial.

“Sure,” he says, “a lot of people believe there’s a dog heaven.”

And he notes that these persons were given a measure of encouragement in 1948 by Rev. L. J. B. Snell, of Holy Trinity Church, Hereford, England. To the children of his parish, assembled in the church with their pels for a service on the eve of the feast of St. Francis, patron saint of animals, Mr. Snell held out this hope:

“Animals and birds are part of Cod’s creation and there is nothing contrary to Christian religion in the belief our pets will live hereafter.”

Willis shakes his head, doubtfully, and comments: “People are funny.” 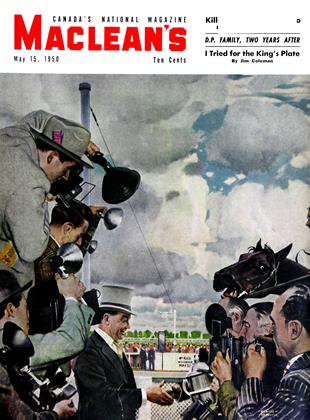