Shaping the Future, One Night a Week September 15 1950

A FRIEND of ours was recently asked to

run for school board in the small town where he has lived since he came back from overseas. When he came to us for advice we referred him to a man we know of who had been active in community work and civic politics for many years.

We sat in on their meeting expecting to hear pretty hardheaded counsel measured in part at least by the somewhat cynical but well-used rule which shows you what’s in it for you.

What we heard was hardheaded enough but not the way we had expected. We listened with new regard for our grass-roots committeemen and women, with new respect for so-called small-time politicians.

He said: “The way I look at it I can either sit around and worry every time the news gets worse or I can do something about it. There was a time when I didn’t see anything I could do about it.

I could do. I obviously couldn’t do anything about the H-bomb but I could do something about getting that rink for the kids on our street.

“That was the beginning. I moved from that job to another where I led a discussion group one night a week in a boys’ club. I started a hobby class at the same club.

“I give one night a week to the community in which I live. I feel I owe it to my town and, in the big view, to my country. I ran for council one year and won. I served two terms and then quit. Not because some people said I did it for business reasons, either. There are always people who will talk like that. I quit because I felt it was time some other fellows took over. Besides, I had no ambition to go on in politics. I went back to my hobby classes.

“I’m still concerned about the mess we’re in —you’d have to be stupid or blind not to be— but I don’t worry as much. Perhaps this is because I don’t feel so frustrated.

“I feel I’m doing something about it, even if it’s only one night a week.” 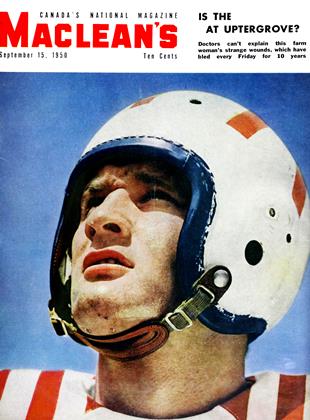