with panties made from parachutes—that square mile of London known as Mayfair again hears the soft rich engine purr of Rolls Royce, Cadillac and Mercedes.

Bang in the middle of this elegant whirlpool at No. 26 Bruton Street W. L—under the royal coat-of-arms— stands the deep green marble-fronted showroom of Norman Hartnell, the grocer’s son who rose to become the Queen’s dressmaker.

Norman Bishop Hartnell at 49 is chunky (five feet 10 inches, 170 lbs.) with rocky features and looks like an ex-athlete, which he is. He goes to the races in an old checked cap and trench coat, and at his home in the shadow of Windsor Castle he breeds horses, dogs and homing pigeons and drinks Scotch and soda with the relish of a lusty outdoors man.

But in his gown shop he wears loose suits, aesthetic ties and soft suede shoes and he talks about dresses with the aplomb of a society woman in accents that echo the cynical brittle London of the 20’s. Putting the tips of his fingers together or spreading his hands in effervescent gestures he patters, “It’s really too adorable ... I think it’s so funny!”

He’s not as vapid as he pretends.

Opening in an attic in 1925 with a capital of $900, two seamstresses and one sewing machine he quickly caught the eye of Lady Louis Mountbatten, then the leader of London fashion; became world famous in 1935 when he made the Duchess of Gloucester’s wedding trousseau;

and in 1938, only 13 years after his debut, was honored as “Dressmaker By Appointment To Her Majesty the Queen.”

Butting through the depression and a decade of clothes rationing he built up a business which today employs 400 seamstresses, milliners, furriers, fitters, wardrobe mistresses, dressers, models and saleswomen; produces 1,000 exclusive gowns a year at prices ranging from $300 to $5,000, and derives from royalties on Hartnell designs for mass production more than a million dollars a year.

He’s won the Nieman Marcus Award and the Palme Académique, American and French “Oscars” for the best fashion designs of the year. He rocked millions of women with the clothes he created for the Queen for her state visits to France in 1938, to the U. S. and Canada in 1939, to South Africa in 1946; and with Princess Elizabeth s wedding gown in 1947.

A few months ago when Captain Molyneaux, the one-eyed English designer, gave up his business in Paris because he’s going blind his most important customer, the Duchess of Kent, moved her custom to Hartnell. A celebrated beauty and one of the six best-dressed women in the world the Duchess stamped Hartnell’s clothes as the dernier cri. Her faithful disciple Princess Margaret followed immediately to Bruton Street, completing Hartnell’s corral of the royal younger set and assuring him the attention of world debutantes.

Hartnell’s office on the third floor of No. 26 looks like a stage setting. The decor is French Second Empire. The walls are striped black and gold. Alabaster cherubs, knickknacks and urns cover tallboys and little inlaid tables. An Aubusson carpet and a leopard-skin rug are underfoot. A large white marble figure of Princess Pauline Borghesi, Napoleon’s sister, reclines half naked on a divan. Hartnell sits behind a gilt and mahogany desk crowded with expensive bibelots and lit by two pink-shaded crystal lamps.

Among his pictures is a signed photograph of Princess Elizabeth wearing her wedding gown.

A Fugitive From Fashion

Like other London fashion houses Hartnell holds two officials openings a year, in February for spring and summer models and in July for autumn and winter models. The shows go on for 10 days in great secrecy and are staged mainly for fashion writers, artists, photographers and buyers from what Hartnell irreverently calls “the rag trade.” Visitors make hard-eyed appraisals as models swish past to soft music, drink cocktails and champagne and depart with the air of conspirators to prepare reports for a palpitating world of fashion.

On week-day afternoons Hartnell’s tall seductivelooking models parade his collection for women of wealth and gentle blood who view with a blasé half interest gowns that would cost the average British wage-earner a year’s pay.

Hartnell encourages the atmosphere of high intrigue surrounding his latest designs. When fashion spies were fighting to get previews of Elizabeth’s wedding gown he entered into the game with glee. He hired four detectives, installed

burglar alarms, frosted his windows and shooed away reporters with mock expressions of terrible wrath. For days he moved around London like a fugitive, jumping from taxicab to taxicab as fashion reporters chased him for interviews. Finally Lord Beaverbrook’s Evening Standard helped itself to a scoop by refusing to honor a general release date.

Hartnell works in a studio adjoining his office among paint pots and dummies. Many designers merely drape materials over a living model. But Hartnell paints a life-size sketch of each garment with special attention on embroidery at which he is an acknowledged master. Sometimes he cuts

out a piece of material and 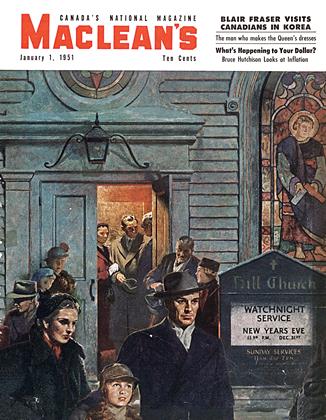