WHEN the North Atlantic Council reconvenes in Rome this month no doubt the security arrangements will be as elaborate as they were here in September. NATO likes to have troops of guards (in Brussels last year they carried sub-machine guns) and lots of passes in various colors, and documents stamped Top Secret in big letters.

It is also possible that in Rome the delegates will speak to each other as frankly, within their heavily guarded chamber, as some of them do to reporters of their own newspapers. Possible, but hardly likely. It would be a major change in NATO procedure.

At the Ottawa meeting the most important new development was the appointment of the so-called Committee of Wise Men to draw up a firm over-all plan of NATO’s resources and requirements. Belgium’s Foreign Minister Paul van Zeeland, president of the Ottawa conference, first learned of this United States proposal from the columns of the New York Times. Mr. van Zeeland was annoyed.

At the very first session of the council it was decided to give out nothing to the press, except daily “briefings” which would be carefully screened of all solid content. Nothing that anybody said was to be reported. Someone suggested they might at least give out the agenda of the meeting, hut this idea was voted down—Dean Acheson, U. S. Secretary of State, spoke quite strongly against it. That was Saturday evening; the Sunday edition of the New

York Times was already on sale in Times Square, with the NATO agenda printed verbatim on page 23.

However, this kind of thing waso relatively unimportant. Every deleJ gation expected it, and most of them had “background briefings” of their own. The press counselor of Norway, who would have liked to obtain more | newspaper space for his country’s point of view, discovered to his chagrin that the Norwegian Foreign Minister was the only one at the conference who insisted on sticking to the rules. Except for some trivial and fleeting annoyance no harm was done, no real secrets betrayed.

OME OBSERVERS thought the trouble at Ottawa was not frankness but the lack of it. Not that the delegates told reporters too much, but that they told each other too little of what really lay at the back of their minds.

Why, for example, did the Committee of Wise Men need to be set up? NATO already has plans galore —military reports, economic reports, financial reports, production reports. Why not act on them? Because all those reports pull punches. They’re the work of officials who, perforce, take everybody’s word for everything. Nobody prods a nice round total to find out how much of it is “program” and how much actual performance. The result is a soft core of mutual scepticism that makes real agreement difficult.

The Wise Men (or the Twelve Apostles, as Mike Pearson dubbed them) will

have to take a firm grip of this soft core and squeeze the water out of it. The committee will be made up of one minister from each government and most of them will be ministers of finance. They will have to face each other, for the first time since NATO was created, with the blunt home truths that any of them will cheerfully hand out to a friendly reporter (provided, of course, he isn’t quoted).

Let’s take Canada as one case in point. Canadian delegates to NATO will tell you, with complete sincerity, that Canada’s role and contribution are never questioned, never criticized. Everybody, they vow, is happy about the way Canada is pulling her weight. There is not the slightest reason to doubt those statements. It’s most unlikely, in view of what other delegates are not told, that Canadian delegates are told anything unpleasant either.

Canada has answers to this criticism. Without conscription it would he impossible to raise an army proportionate to that of the U. S., and there is a strong case against peacetime conscription in Canada. The Government is sure it would weaken, not strengthen, Canada’s war potential.

Canada has counterarguments, too. Canadian officials ask, “Why are we expected to carry the same load as Americans when they make the major decisions? They call the tune and they should pay the piper.” Canadians also point out that U. S. forces are lavish in using manpower, that Canadian services get more work done per manday.

As for the economic burdens of defense, Canadians admit the American taxpayer is contributing a bigger slice of his total income. U. S. defense spending is 18.7 % of the net national income, Canadian only 9.9%. But the American’s take-home pay is still much higher than the Canadian’s, after paying the defense bill, and Canada thinks that’s a relevant point.

NATO meetings hear none of these answers, because the criticisms aren’t made in the first place.

In the case of Canada this doesn’t matter much. Canada is not seeking American help. All the other countries in the North Atlantic community do need help, both economic and military. Unspoken criticisms are a fuzzy but formidable obstacle to the kind of wholehearted co-operation that the job requires.

At Brussels last year each country undertook to build up its armed strength to a certain point by a certain time. The United States is delivering her commitment in full. So is Canada. Britain is delivering the full amount of her undertaking in pounds sterling, though there is some doubt whether her 4.7 billions will buy as many guns, tanks and divisions as originally planned.

Other nations (in Washington’s opinion, anyway) are not delivering. The figures on paper are still the same, and they are politely accepted in the conference room, but they are not believed. Americans do not think the French, the Dutch, the Belgians are doing as much as they said they would

do, or as much as they could and should be doing.

This gap between promise and performance would be bad enough, but now there’s another even wider gap. The new one is between the promises of last December and the requirements of today. Even if each nation does everything it has yet undertaken to do. General Eisenhower thinks it won’t be nearly enough.

Obviously that sharpens the argument about “burden-sharing.” If more must be done, who’s to do it? Who’s doing least now?

There’s no way of settling this dispute. Which counts for more — a French infantry division getting two francs per man per day, or an American squadron of heavy bombers which cost vastly more hut take fewer men away from home? It costs fifteen times as much to maintain a Canadian division in Europe as it does to keep a European division; should Canada get credit for fifteen brigades instead of one?

On the other hand, costs themselves are misleading. A Dutch colonel gets about the same pay, at current rates of exchange, as a Canadian sergeant. But in the Netherlands the colonel lives at least as well as a Canadian major does in Canada.

These points at least can he spoken out loud in international company. There are others which cannot be spoken. The Americans, the Canadians, the British and the French are each convinced that one of their own divisions is worth at least five Italian and ten Portuguese. Americans are resentful of having to carry the heaviest load in Korea, while the French point out that their casualties in Indo-China have been just as great as the American casualties in Korea.

There are other “unspeakable” arguments in the production field. Europeans in general, but the French in particular, are bitterly resentful of American secrecy about new weapons. They are being urged to produce more arms, but they don’t want to waste their precious factories on World War II models which are already obsolete.

Americans, on their side, don’t trust anybody’s security methods except their own, and they are particularly wary of the French. They never forget that according to the election figures, France is twenty-four percent Communist, and that the French Army is supposed to be a cross section of the nation. Alliance or no alliance, they’re handing no military secrets to anything that is, or even might be, twenty-four percent Communist.

More important, perhaps, than these specific differences is a broader division of opinion about the probable immi-

nence of war, and therefore about the relative importance of military and economic strength. Americans are proceeding on the assumption that World War III is just around the corner. Philip Jessup, U. S. ambassador-at-large, told a press conference in Ottawa that the present level of defense effort is simply not enough.

“We’ve organized a fire department and appointed a fire chief,” he said, “but that’s not much use unless we fill out the ranks of firemen. There is a present danger of fire which will not be put out by plans for a bigger fire department later on.”

The British don’t accept this view. Nobody, of course, is rash enough to say that war may not break out within the coming year; everybody knows that it may come, and that the initiative lies with the Kremlin. But the British (and most of the other allies including Canada) feel that the highest degree of over-all safety will be secured by a slower rearmament program than the United States would like. They remember, and they think the Americans tend to forget, that Communism must be i met on two fronts, the political as well as the military. They know there is j a point beyond which it’s unwise to go on reducing the standard of living.

Britons see a real possibility that the Kremlin may have switched emphasis from the military to the political front for the time being. Stalin has already missed the moment of widest disparity between Western and Soviet strength; never again, in all probability, will the free nations be as heavily outnumbered as they were in the summer of 1951. But, if the inflation balloon really goes up in the months to come, Stalin’s big j chance for political victory is still ahead. If this analysis is correct, moreover, an overambitious rearmament program would play right into the Kremlin’s hands.

Needless to say, both parties to this argument can see the other side. Each knows that the course he prefers is a risky one—but there is no course left which is not risky.

These are the problems, or a few of them, which the Committee of Wise Men must resolve by the time the council meets. They won’t succeed fully, of course total agreement in matters of this kind is impossible in a free society. But they will have to make the necessary compromises and get a plan launched at some agreed level. It won’t perhaps be as high as the generals might prefer, hut it will be the highest that a group of elected governments believe they can coax out of their respective peoples. And thât, while peace and democracy survive, is the most we can do. + 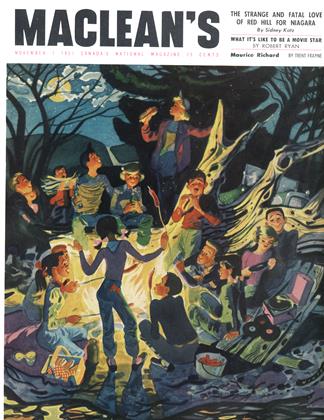