THE RADIO in my room in this excellent New York hotel is relating in appropriate musical terms the frustrated love of a young woman whose boy friend has momentarily, or perhaps permanently, forsaken her. The taxicabs are hooting their horns like puzzled hounds trying to pick up a scent, for it is theatre time and the traffic creeps as slowly as a mist coming up the Hudson.

I came here after three days in Toronto, and the contrast could not have been greater if I had flown from Bagdad or Cairo. I have never seen Canada in a more confident or resolute mood and I have never seen New York so vibrant and so bewildered. There are at least eight raging hits in the theatre and the people here are rushing to them, paying fabulous prices to ticket speculators as if, somehow, the mere acquisition of the tickets gives them a feeling of solidity in a world of wildly changing values.

Korea has been more than a blow to American pride; it has resurrected the corpse of isolationism and the corpse is showing plenty of liveliness. Hoover was, of course, the principal resurrectionist. That speech of his brought the dead to life.

There is nothing to be gained by closing one’s eyes to the American reaction to events in Korea. It has been a tremendous blow to American pride, for they have never lost a war before. It may he that they have only lost a battle now, hut they do not see it in that way.

True to human nature, they are looking for a scapegoat. Strangely enough one hears little criticism of General MacArthur, and I have talked with all sorts and conditions of men. They say he was ordered by the United Nations to drive beyond the 38th parallel but was

forbidden even to make airplane reconnaissance over the Manchurian border. Thus the general was the victim of the ineptitude and the vacillation of the United Nations.

The next reaction is equally plausible. Where were the allied troops? Why should America supply all the soldiers—or practically all—and sustain 90% of the casualties? Instead of the slogan of the Three Musketeers, “All for one, one for all,” the Americans say the fighting was done by one for all, and that the all were in favor of the one doing it. In my talks I have not heard one mention of the 5,000 brave and skilled Turkish soldiers sent to Korea, although Turkey lives within the very reach of the Russian clan.

Nor is there any use trying to tell them that Britain in Malaya and France in Indo-China have been at war with Communist aggression for five years and that no American aid has been sent to either country.

The present American mood is understandable. The casualty lists are tragically heavy and there is the inescapable feeling that it has all been for nothing. If you remind them that France lost a million men holding Verdun in 1916 and 1917 and not an American soldier was sent to her assistance; or if you say that even when London was being bombed every night by the Luftwaffe there was no intervention by the U. S., they will only reply: “That was your affair. You did not consult us when you declared war on Hitler. But this Korea thing is different. We Americans had nothing to do with it. The United Nations went to war and then handed us the baby.”

This raises one of the historical enigmas of our time. Speaking as a private member of the Conservative Opposition at Westminster, I can only say that I Continued on page 28

knew nothing about the intervention in Korea until Prime Minister Attlee stopped a debate on steel to tell us the thing had begun.

Undoubtedly the United Nations authorized and ordered the action against North Korea but it is difficult to believe anything else but that the conception was American. Nor do I deny that it was a great moment in history when America showed she was determined to match resolution with the might that she had attained in the world. But the picture of a group of indomitable foreigners at Lake Success ordering the -U. S. Navy, Army and Air Force to open fire just does not carry conviction.

Right or wrong, Korea was a plan born in the American mind.

Ameiica has always been peculiarly sensitive to the menace of the Far East. Whatever aggressor arose in Europe there were always Great Britain and France to constitute a first line of defense. But there was nothing between the western coast of the U. S. and the Yellow Peril except small powers with only a limited striking force.

It is barely remembered now that when war broke out in 1914, Japan, as Britain’s faithful ally, came in at once and even offered to send an army to Europe. The British toyed with the idea but it was obvious that American opinion was heavily against it.

When the 1914-18 war was over, and the financial power of the world had passed from London to New York, the Americans began to bring heavy pressure on Britain to end the alliance with Japan. The Americans saw great danger in a modernized, mechanized Japan determined on an expansionist policy in Asia. They may have been right. On the other hand there were many of us in Britain who felt that a strong Japan might he a useful counterpoise to revolutionary Russia.

But the British had embarked upon the policy of: “America right or wrong —America!” We were heavily in debt to her. With deep misgivings but with hope that time would prove us right we ended one of the most loyal alliances that ever existed—-the alliance of Japan and Britain.

Thus was broken the last link of Japan and the Western world. The militarists and extremists in that land of scented mists seized power without difficulty. It might have happened anyway, hut we played our part in creating a Prussia of the East. Looking back now we can see that it was the wrong decision. And since Great Britain took that decision the blame must rest with her, but not the entire blame. America, with her weakness for the short-term view in world affairs, was an accessory before and after the act.

I am not trying to be wise after the event, which is so easy to a writer, but I helped to organize the vote of 90 in the House of Commons against the American Loan, and I led a rebellion of 12 members against Britain accepting Marshall Aid. My principal reason was that if Britain became a satellite of the U. S. the world would lose the strength and sagacity of the British Empire as a central mediating influence between Communist Russia and American individualism.

Instead of that, the authority of the Western world was centred in Washington. The British Foreign Office had become an overseas branch of the State Department. I do not enjoy

writing those words, but they are true.

In an attempt to establish something of its former independence the British Government decided to recognize the Communists as the de facto government of China. The Americans would not follow our lead. But why not? By what process of logic can you recognize Communist Russia and refuse recognition to China? Communist China, as a member of the United Nations, would have had to accept her share of responsibility for the Korean affair and might indeed have had a moderating influence. Instead of that we either brought China into the war against us or gave her an excuse to intervene—it does not matter greatly which is true—and Russia had scored an immense victory at no cost to herself.

If, in New York, I put this point of view to my American friends they would probably retort: “Well, at least we are not a bunch of appeasers like you were at Munich.” That is an effective charge—forceful, concise and damaging. But surely appeasement is the very basis of international relations, just as it is the basis of human society.

I venture the suggestion that the American mind is s:till traditionally absorbed with the Far East almost to the exclusion of the real threat, which is in Europe. I maintain that the whole conception of the Korea campaign was American and that even if all the members of the United Nations had played their part as manfully as the U. S., the situation would have been dominated by the Chinese and the cruel winter weather.

Rebuilding on the Ruins

I find the state of American opinion deeply disturbing. It is not rational, for even at home they blame Dean Acheson although his policy was to do everything to avoid direct conflict with China. Nor do they enhance their dignity when they ask what Britain and the other Marshall-Aided countries are doing for the money given them. It was not written in the bond that Marshall Aid was intended to create battalions of mercenaries Lo guard America from aggression.

I believe profoundly in the Englishspeaking leadership of the free world but I do not and never will believe in an American leadership of the world. Geographically, temperamentally and historically the United States is too remote from the centre of things. In fairness, too, let it be admitted that Britain’s foreign policy in the last five years has been opportunist rather than fundamental, which is part of the heavy price paid for Churchill’s dismissal by the electorate in 1945. Nothing we have gained in social services can count against the steady weakening of Britain in foreign affairs.

Now we must rebuild on the ruins of Korea. Chastened by defeat and grievously sorrowed by the slaughter and mutilation of the young men of yet another generation, we must drop our differences and recriminations, achieving a unity of purpose and a strength of armaments that will give pause to any aggressor.

But in all sincerity I would appeal to the American Press and the American politicians to stop asking: “What did we get for our dollars?” The days of the mercenary are over. ic 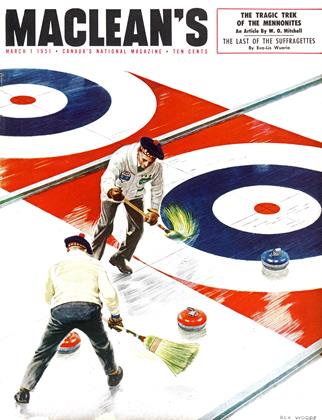