I'D CLIMB THE HIGHEST MOUNTAIN*

A homespun, bucolic and rambling tale which has to do with Methodist minister (William Lundigan) and his restless wife (Susan Hayward) as they go about their heavenly and mortal chores 40 years ago. There are two or three quite good scenes.

THE LAST DAYS OF DOLWYN: This warm and moving British drama is two years old but is still getting first-run bookings. It tells of the strange events leading up to the deliberate flooding of a lovely village in Vales. Dame Edith Evans' performance is one of the finest the screen has offered in a long

LAST HOLIDAY: A diverting and

sometimes poignant story by J. B. Priestley, starring Alec Guinness as a mousy nobody who suddenly begins asserting himself after he learns he has only a few weeks to live.

amazingly unchanged after 20 years, is funnier than ever in the best sequence of this wild roughhouse. The script bogs down at times, but these lapses are forgotten when Harold and Jimmy Conlin and a lion play tag on a skyscraper ledge.

hattan. James Whitmore is a shady lawyer who moves in on her. A loud farce, occasionally amusing.

THE MUDLARK: Irene Dunne, with a double chin and other disguises, plays Gueen Victoria in this leisurely but enjoyable comedy-drama, an AngloAmerican effort filmed in Britain, Little Andrew Ray is likely to steal your heart as a dockside waif who invades Windsor Castle. The good cast includes the busy Alex Guinness as Disraeli.

ODETTE: I'm afraid I can’t enthuse over this one as glowingly as some of my friends, although its basic story is a fine one. Anna Neagle impersonates a real-life Frenchwoman who did brave things as a British spy in wartime France. Earnest, but sketchy and shal-

STATE SECRET: A lively and sometimes witty suspense yarn, with Douglas Fairbanks, Jr., in fine fettle as an American surgeon who operates on a European tyrant and then wishes he

Mitchum, as a medical man too stupid to recognize a “mental case" when he sees her, flees from the police with a murder victim's widow, played by sultry Faith Domergue in a style almost as corny as that of Theda Bara. The doc, suffering concussion, has a hard job staying awake. Me too.

Admiral Was a Lady: Comedy. Poor.

Born to be Bad: Drama. Poor.

Hunt the Man Down: Whodunit. Fair. I'll Get By: Musical farce. Fair.

Run for Your Money: Comedy. Fair. 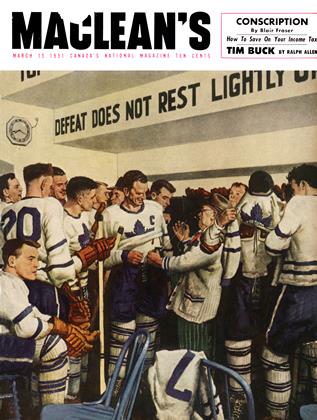