YOU can still get up an argument any time in Ottawa on the question. “Who’s going to be the next Liberal leader?” But, as the crisis deepens, the argument becomes more and more academic. Prime Minister St. Laurent is more and more likely to stay on for another term.

As far as reporters can learn, he himself has said nothing about it. Some of his associates doubt if he has made up his own mind—and, equally important, whether Mrs. St. Laurent has made up her mind which she’d rather have him do. There is also some mild dispute about his prospects for good health through the next six years. Which is the wiser course for a hale and hearty man of 69—to carry on with Canada’s heaviest job or to choose the rust and boredom of premature retirement?

But, if the international situation grows worse, or even remains as it is, these questions fade out a good deal. St. Laurent is the man supremely qualified to lead Canada in a time of crisis. No one else in any party could equal him. St. Laurent is a conscientious patriot, very sensitive to the call of duty. If it can be argued (as it will be argued) that he owes it to his country to remain on the job, he will probably stay.

CANADIANS are often accused of being apathetic about the world crisis. Certainly there is a lot more evident excitement about it in the United States than here. But Gallup Poll officials, on the strength of their surveys in recent months, say Canadians are much more aware of danger

than they may appear. Pollsters think the Canadian public is wider awake than the Government seems to realize.

This conclusion isn’t always reflected in the yes-or-no answers to the polls themselves. Events are moving so fast, it’s hard for pollsters to keep up. For instance, a considerable percentage of Canadians lately declared themselves in favor of a bigger Canadian contribution to the Korean War. The poll was started when only the Princess Pats had been sent to Korea; before it could be completed, let alone published, the rest of the Special Brigade was on its way.

Quite aside from percentage reactions to particular questions, though, pollsters have been impressed by a general increase in awareness of the tense international situation. People are thinking about it now as they were not a year ago, and they seem to have got into a mood of resolution which is all the stronger for being rational, not emotional.

Dr. George Gallup himself visited Canada a few weeks ago. When his Canadian colleagues told him of their results he said: “If that’s the case, you Canadians are lucky. We are disturbed by the emotionalism we find in our American surveys. We’re afraid it’s a mood that won’t last.”

Along with this cheering news of our own morale there have been equally encouraging reports on that of the enemy. Inside the satellite countries the Communists seem to be having trouble.

Party members expelled) had been going on for a long time quietly. It was reported in the controlled press as a “screening” program to weed out the half-hearted and the ill-educated, which terms would cover any who might put Czechoslovakia ahead of Soviet Russia in their loyalties.

The screening program was conducted by a lady whose name is variously reported as Smerdova, Smermova and Smirova; Westerners take some pleasure in pronouncing it “Madame Smear-Over.” In the weeks before the purge was officially revealed one of the hottest of cocktail-party rumors had been that Madame SmearOver had herself been smeared. Sober men treated this tale as pretty wild and far-fetched—but when the list came out of those picked to die, Madame Smear-Over’s name led all the rest.

Except, of course, for the name of Vladimir Clementis, the ex-minister of Foreign Affairs. Clementis had been in disgrace for a year (he resigned from the Czech Cabinet in March 1950) but in January he was still at liberty and still reporting daily to the obscure office to which he had been relegated. Then he vanished. By the end of February it was clear that whatever had become of him physically, he had been cast for the role of traitor-in-chief in the latest Soviet farce.

Among Western diplomats few tears are shed for Clementis himself; when he was riding high he was as nasty a type as any. Westerners remember him best as the sinister, scar-faced “watchdog” who used to sit behind the late Jan Masaryk in Czech delegations. He was the trusted Communist whose job it was to supervise, and spy upon, the genial democrat Masaryk. After Masaryk killed himself Clementis got his job. Whatever has happened to him now, it’s not likely to be worse than what happened to Masaryk.

Clementis is not the only one, according to rumor, to fall out with the Soviet Fatherland. The Minister of Foreign Trade is said to be in very bad odor because Russia is not satisfied with recent deliveries from Czechoslovakia—not enough Czech goods arriving to raise the Russian standard of living. And the Minister, like most Czechs, is said to be more and more indignant at the Russian habit of milking the Czech economy.

Nobody infers from this that there is going to be a real rebellion in Czechoslovakia, or any other satellite—the Russian grip is too firm, by now. Still, it’s nice to know they aren’t finding Communist imperialism too easy.

Canada’s response to the Unified Command’s request for more troops to Korea was one of the fastest on record.

Theoretically, of course, the decision was made last August when the Special Force was raised. Actually, as time went on, there was more and more reason to believe the brigade would not be needed in Korea, and would go to Europe instead.

On a Monday evening Defense Minister Brooke Claxton said in a CBC interview program there were no firm plans for the dispatch of the Special Force. He said the brigade was at the disposal of the Unified Command and would go wherever it was wanted. But, in answer to other questions,

Claxton made it fairly plain that he himself thought they would end up in Europe, and therefore that Canada need have no worry about recruiting her contribution to General Eisenhower’s integrated force. That was Monday evening.

On Tuesday General Charles Foulkes, chairman of the Chiefs of Staff, came back from Washington to report the Special Brigade was wanted in Korea as soon as it could get there.

Wednesday morning the Defense Committee of the Cabinet met; Wednesday afternoon it reported to the Cabinet as a whole. Before 6 o’clock Claxton was able to announce to Parliament that the Special Brigade would go.

New plans are afoot to push the “war for men’s minds” in both Europe and Asia, and Canada will play some part in them. The National Film Board has an item of $250,000 in its 1951-52 estimates for a “Freedom Program” portraying the advantages of democracy.

The suggestion came from Arthur Irwin, National Film Commissioner, and was taken up enthusiastically by his Minister, Hon. Robert H. Winters. Somewhat to their own surprise Winters and Irwin found it generally applauded. Even the hard-headed Treasury Board, normally allergic to any new way of spending money, passed the quartermillion-dollar item with only the mildest of shudders.

Considered as part of a defense budget, of course, the Film Board program is ridiculously modest. It will cost less than one medium tank, half as much as the cheapest modern combat plane. The United States spent $2}/> millions on such films in 1950, and for 1951 has quadrupled its output— Americans will spend $11 millions this year making “freedom” films in 23 languages.

On the other hand, they probably represent as much as Canada can do with our present resources for making films. Film Board people are keenly aware that the Freedom Program is a major challenge. A “pretty good” effort won’t be enough; the product must be first class, or it’s not worth doing at all. Might even do more harm .than good.

Also, there’s a lot more involved than mere technical skill. Films for Western Europe, for example, will be shown to people who have had their own form of democracy longer than we have had ours. There is danger, as one External Affairs man put it, of setting out to teach our grandmother to suck eggs.

In Asia the opposite problem arises. What’s the right approach to peoples who know little of freedom and nothing of material security? Whose world is bounded by their own physical horizon? Whose suspicion of Western motives is centuries old, and all too well founded in fact and experience?

It is recognized that, for either audience, films of straight propaganda are worse than useless. Presentation of Western democracy as a pure and perfect Utopia on earth would be laughed off the screen on either continent. The attempt will be to present a true picture of democracy with candor, with humor, and with a reasonable degree of sophistication. The “message” of each film will be implicit rather than explicit, freed as far as possible from the label “propaganda.” ★ 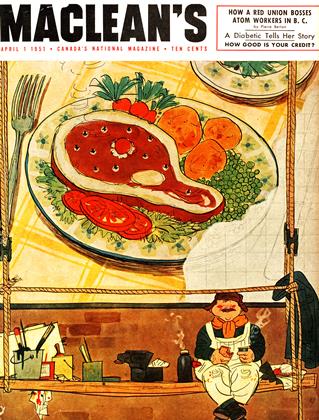