CALL ME MISTER: Danny Thomas, a Hollywood recruit from the night clubs and television, supplies the chuckles in this routine Technicolor musical. As a Gl condemned to a career of KP he sings a lively “Lament to the Pots and Pans," and later adorns a good skit lampooning the foot-soldier's concept of the easy life in the Air Force. Betty Grable and Dan Dailey are the stars, technically speaking.

HALLS OF MONTEZUMA: Hollywood's latest tribute to the Marines winds up being a pretty impressive war movie, although spoiled in places by some rather flamboyant campaign oratory. Lewis Milestone’s direction is highly competent, and he has a fine cast, including Richard Widmark.

KIM: A long, spotty but spectacular adventure, based on the Rudyard Kipling novel. Small boys, I notice, seem to relish it, and there are quite a few diverting moments for their elders, too. Dean Stockwell gallivants all over India pretending to be a native and helping thwart a Czarist Russian plot. Errol Flynn and Paul Lukas keep things moving when the young fellow isn’t around.

MACBETH: Orson Welles has confected a wild and woolly movie version of the Shakespeare tragedy, emphasizing bloodshed and excitement and almost ignoring the deeper reaches of the drama. Visually, there are two or three fine rousing climaxes, but on the whole I found this effort disappointing —and, in spots, well-nigh ludicrous.

THE MATING SEASON: A pleasant comedy featuring the immensely likeable Thelma Ritter as a hamburger-stand operator who gets mistaken for a servant when she arrives to attend her son's wedding to a lady of distinction. John Lund and Gene Tierney are the Lohengrinners. As the bride's horrible mother Miriam Hopkins is given some of the best lines in the script.

THE STEEL HELMET: This first Korean War movie didn’t have a fancy budget to work with, and some of the economizing is left exposed where it shouldn’t, but the result is still a betterthan-average Gl melodrama.

THE 13th LETTER: Notable for the “debut" of ex-lover Charles Boyer as an old man with side-whiskers and very little hair, this is an interesting yarn about an outbreak of scandalous anonymous letters in a Canadian village. The picture was mainly shot in Quebec, one of North America’s most photogenic locales.

MOURNING BECOMES ELECTRA: This horrendous tragedy was withdrawn and drastically edited after its disastrous première a couple of years ago. If the original was worse it must have been truly dreadful. 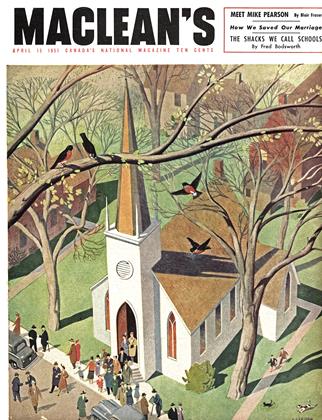