WHEN THE CANUCKS HIT EUROPE AGAIN Lionel Shapiro May 15 1951

PARIS—On a sunny Saturday afternoon this spring a group of two hundred Frenchmen, veterans of the ’14-’ 18 war, formed up at the corner of the Avenue George V and the Champs Elysées. The men were members of a regimental association and had come together to commemorate a battle long obscured by the passage of years. When the policemen on traffic duty had cleared the Champs Elysées the two front ranks of veterans raised their massed flags and led their comrades on the short march to the Arc de Triomphe where they were to pay their respects to the Unknown Soldier.

As the parade went by, men doffed their hats and placed them over their hearts. Women were misty-eyed.

Approaching the Arc, the parade passed the Astoria Hotel, General Eisenhower’s temporary headquarters. Among the curbstone watchers were three American soldiers. They stood with their hands in their pockets, quizzical grins on their youthful faces. “Jeez, Ed, d’y’ever see a crummier bunch?” “Boy, oh boy, what an outfit that musta been.”

They bantered and chuckled as the civilians around them stood silently and respectfully at the passing of the flags. When the parade had moved into the shadow of the Arc they tossed away their cigarette butts and charged off, oblivious to the outraged glances of the civilians.

This was a small incident. The Americans hadn’t contravened any regulation in the military book. But they had added another annoyance to the long smouldering civilian resentment of American troops and they had provided two or three dozen Parisians with another “American story.”

Every French person of my acquaintance, without exception, has his or her “American story” to relate—some of drunkenness, of street fights, of insults to women, but mostly of an inexplicably arrogant attitude—and it is related with all the more bitterness because Parisians have lived with the problem since 1944.

At the moment this is an American problem because American troops are the only ones to be seen in Paris in any numbers. But it will soon become a Canadian problem too. Before the end of the year Canada will have almost fifteen thousand uniformed men in Europe and there is no reason to believe they will prove any more immune than their American comrades to the traditional behavior forms of the soldier away from home.

In 1944 and 1945 the Canadians were equally unpopular in Brussels and, after the fighting, in Amsterdam. Many of them were rowdy, thoughtless, overbearing and in some cases criminally cruel. Many of them behaved as they would never dare or dream of behaving at home.

At that period there was some excuse for battle-weary men. Today there are no such excuses. And today the consequences of bad feeling between the North American serviceman and the European civilian can be far gceater than they were in 1945. The solidarity of the Western world, which is essential to its survival, cannot be guaranteed by

treaties alone. Its real guarantee—and that guarantee does not as yet exist—is the understanding of continent for continent, the tolerance of nation for nation, the respect of man for man.

The unpopularity of foreign troops in our allied countries of western Europe may be traced to two evils. The first is raw rowdyism in public places. The second, which is much more difficult to pin down and correct and yet is much the greater evil, is an attitude of arrogance.

In combating rowdyism the first task for the Canadians, while they are training in Canada, is to weed out the potential troublemakers and to leave them at home. This is not an insuperable requirement. Within a few weeks of the beginning of training every company commander knows the two or three chronic trouble-makers in his outfit.

The second task is to set up regulations for a self-policing system. French and Belgian civilians, much as they hated the German invader, freely admit that the German soldier behaved correctly on leave. This was due mostly to a system whereby any German officer or noncom, on finding a soldier drunk or rowdy in a public place, had the authority to order the man to his quarters.

The problem of arrogance is not so easily tackled. In the soldier it usually stems from ignorance of the country where he is stationed and from a mistaken conception of the mission in which he is engaged. On both points, trouble can be avoided if the soldier is properly indoctrined before he is dispatched overseas.

The American soldier’s arrogance stems from the fact that he is deeply convinced he has been sent over to defend France (or Belgium or Holland) because these Europeans are too lazy or cowardly to do the job themselves. It is the rare and exceptional soldier who is aware of the truth: that the defense of his country depends on the defense of Western Europe, that if anyone is being imposed upon in this common effort it is the western European who finds himself sitting in the first line of the defense of North America.

This point of indoctrination must be hammered home to the young Canadian destined for European duty. If he understands this thoroughly it will make the difference in his attitude between arrogance and an easy tolerance. It will make him a welcome guest in western Europe and not a necessary evil. He will have a better time on his tour of duty; he will learn more; and he will return a better citizen, a more enlightened man. Moreover, he will be the best investment Canada could possibly make in building those spiritual alliances without which all our military alliances are likely to avail us nothing. 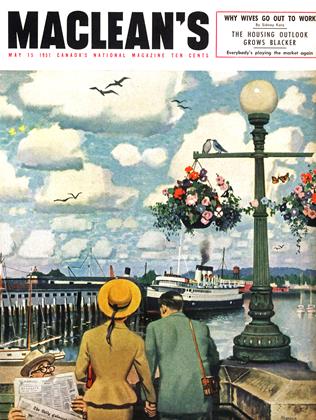